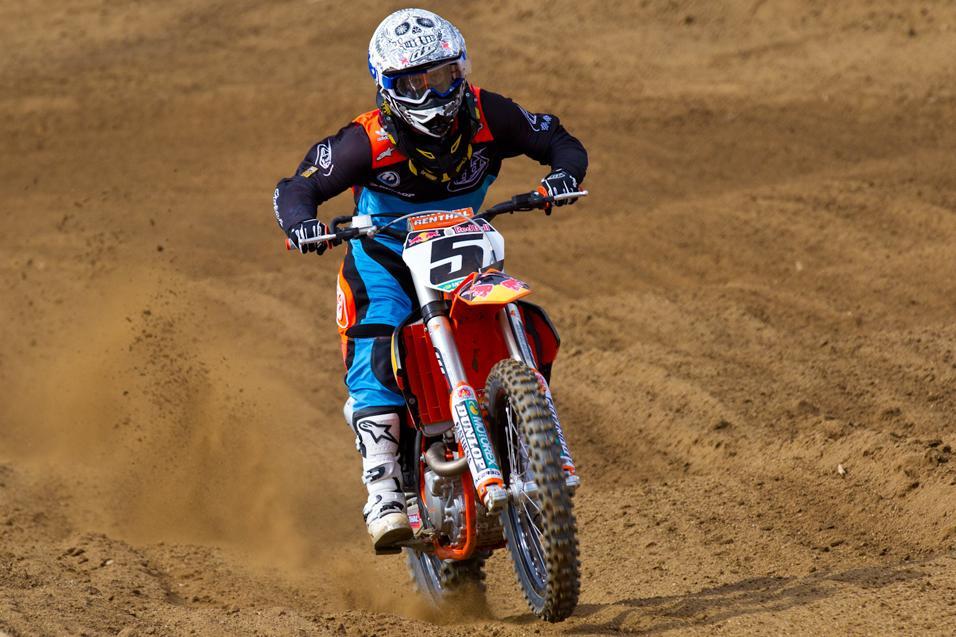 I have a hopefully quick and painful question for you.  Why don’t more riders run tinted lenses in their goggles during those hot, sunny, bluebird sky days during the nationals?

Tinted lenses get popular when a winning rider is using them. I think Dungey and Baggett are both using clear lenses so they just aren’t popular right now. Many of the goggle companies make a light blue lens, which is actually the best lens you can use to cut down glare, reflections just plain too much sun. There are a couple tracks where you don’t want to run any tint, such as this weekend at the Washougal national. The track runs in and out of trees and their shadows making it very difficult to see when you hit the shaded areas. About the time your eyes start to adjust you are making your way back into the sunny areas again. Personally, I’d like to see any pro head to the line with those old lenses that had holographic dollar bills, nails or coins printed onto them. Those lenses say, “Hey, I’m a hard ass and I like to party. And I also don’t care if my vision is partially skewed by the ridiculously corny images plastered onto my lenses. Let’s race.”

with two net works doing the tv coverage,it must be real lucrative. why the hell does dave coombs not get the riders a serious point fund. a profit sharing,pension plan. tennis,golf type purse money,so riders can make a real living! can you imagine the depth you would have if guys could pay for thier racing and bank some money. everyone else gets paid big,track owners,promoters consessions, the AMA  ,sh#t, i bet emig&lizard face make more than the riders. everyone but the riders is making money. is dave making the money? who is making the tv money?

You didn’t leave your name so I just made one up for you. Read slowly because I want you to get this: You know nothing about the sport, economics and especially the series television package. While the current package bounces around from channel to channel a little more than I’d like to see, the goal is to get more people exposed to the sport and I think it is a good step in that direction. The big misconception is that these television networks are clamoring to get motocross on their channels. Not even close. They likely don’t know anything about dirt bikes. MX Sports, just like Feld during the supercross season, is paying to have their series broadcast on those networks. And the bigger, mainstream channels are unimaginably expensive to purchase airtime from. Have you considered the production cost of putting down cables around an entire motocross track, bringing in television trucks and staff to do live television announcing? We’re talking mucho dinero… and probably some American money too.

Let’s not forget that the economy sucks right now. I don’t think I have to explain this to anybody.

Lastly, if you think promoters are making so much money putting on dirt bike races why don’t you go out and promote one? Good luck, guy. It’s not as easy as you think.

I agree that a wider range of riders should be compensated better in professional racing. These guys are true athletes who are incredibly talented and they are doing very dangerous work. But comparing motocross to basketball or another stick-and-ball sport just isn’t apples to apples. Economics dictates that those athletes are going to make more money because their industry is bigger by a multiple of, like, the current US national debt.

You want a simple answer to your last question, Captain MENSA? The television companies are making the TV money.

I just returned from my summer Millville vacation. Has been a highlight for the past twenty plus years. I have so many great memories from the 125/500 days to present. I have always had a ton of respect for the riders that line up to the gate. A bonus to this event is the creatures you encounter along the way to your next vantage point. Not saying that I'm a gift from the Gods, but some of these folks should be chased with a strait jacket and a net. This one Mongoloid seemed to cross our path more than we needed. He was dressed up in full-on road construction neon. This fruit loop would walk around chanting “Millllvillllllllle” And no one would acknowledge the freak. I also stumbled across him in the pits. My question is:  When you were representing your teams at these autograph sessions was it hard not to piss with these individuals?

P.S. I also have some poster stock that needs your John Henry cause your line was too long.

Road construction neon? Fruit loop? Well, that sounds about right for the times. Back when I was racing we had the Whoop Monster, who I always assumed was a Vietnam veteran with an abundance of camouflage and time on his hands. He was weird but you couldn’t help but like him for his enthusiasm. This fancy little mutant that you came across sounds more like a Village People reject who got lost and wandered into the Millville national. What a shame… First we lose the Green Lantern and now the Whoop Monster at Millville.

P.S. Hopefully I can get to Millville next year and illegibly scribble my Herbie Hancock on those posters for you.