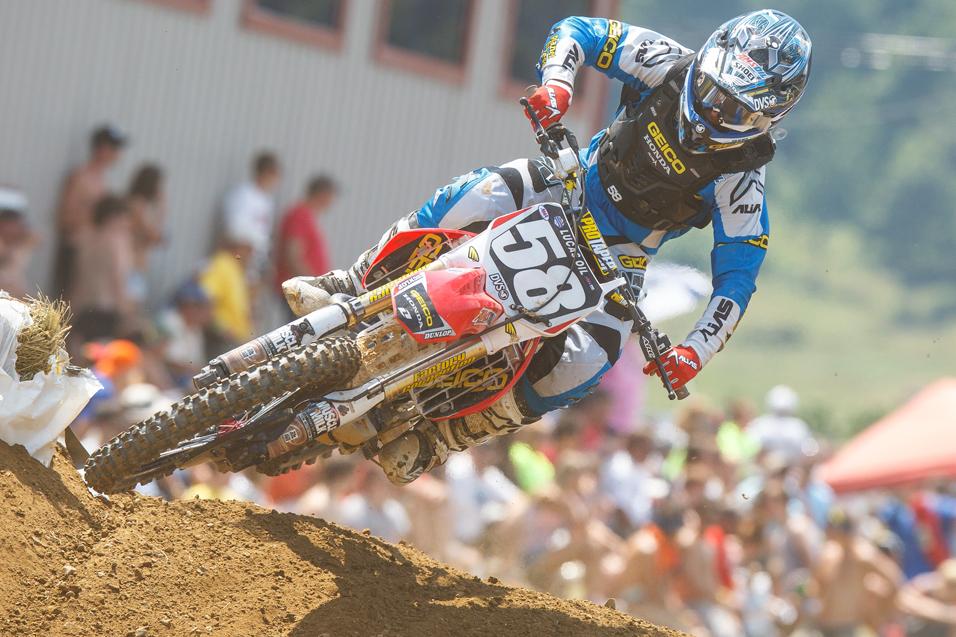 June 22, 2012 9:45am
by: Haley Whisennand
It’s 8:45 a.m. The sun has been in the sky for only a couple hours, but thirty-eight riders still trudge onto the starting straight at Budds Creek. GEICO Honda’s Wil Hahn moves into position next to his competitors. The next fifteen minutes are valued time. Practice allows for him to get a feel for the track, yes, but what’s more crucial are the lap times he can crank out in that time. With better lap times come a better gate pick. And with a better gate pick, hopefully, comes a better first moto start.

“My starts are getting pretty consistent,” Hahn says. “Even though I may not be getting the holeshot every time, I’ve been in the top five.”

In a sport where good starts are vital to running up front, this consistency is important. Budds Creek is the fifth round of the Lucas Oil Pro Motocross Championship, and Hahn has yet to step up onto the podium. He came close at High Point, but ended up finishing fourth in the first moto. Coming that close to the box, though, provided him with some extra motivation. 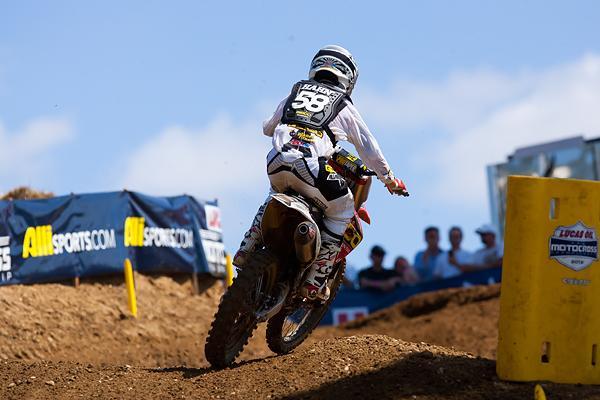 “At the same time, I’ve been out for a long time, so I have a lot of motivation to be there,” he says. “But that just kind of reassures you that, yes, you’re doing the right things and everything’s going right.”

A long time is an understatement for the amount of time Hahn missed racing. His 2011 season, which was being named as his time to shine by media and fans alike, went up in flames immediately. During practice at Anaheim 1, he flipped over the bars, sending him to the hospital with a broken back. He was slated to return to racing near the end of the supercross season, but ended up injuring his collarbone while training.

This set him back even further, pushing his return date to late in the motocross season. Hahn was released to ride the last four nationals, but only managed to make it through one round before injuring himself again, putting him back on the sidelines for the rest of the year.

His 2012 supercross season lasted one round longer before injury set it again, with a busted hip prior to round two in Phoenix. He was able to return before the indoor season ended, even riding a factory Team Honda Muscle Milk 450 a few times. Motocross started rough, but he’s managed to improve each week.

“At the beginning, I was doing one good result, one decent result,” he explained. “Then things started to pick up and everyone started to settle into their pace.”

Hahn’s results have improved both in his individual motos and his overalls. In the last three rounds, he has finished in the top ten in each of the six motos. His overalls have improved from tenth, which has been his lowest yet this season, to his season-best sixth at High Point. 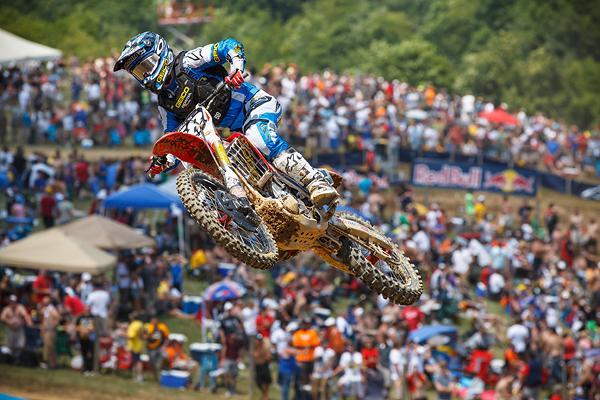 A fourth in the first moto at High Point marked a seasons-best for Hahn.
Simon Cudby photo

By the time any racing actually begins at Budds Creek, most of the riders have been there for nearly five hours. It is 1 p.m. when Hahn lines up at the gate for his sixth first moto start in two years. He managed to qualify seventh, which is right where he ends up week after week. It’s a decent place to be for the start, but Hahn knows that the real challenge comes after the first few laps.

“I’m just kind of focusing on rebuilding myself,” he said. “But I really want to be [up front]. I think that, more than anything – and I’ve been saying this every weekend – if you don’t start with [the top guys] every week and stay with them, they’ll be gone.”

Around 1:45 p.m., Hahn crosses the finish line of moto one in sixth. He stayed there almost the entire race, separated from fifth and seventh place by nearly 20 seconds on each side.

“I was out there all by myself,” he told Steve Matthes after the race. “It was boring. It was not fun. I was in sixth place, which is a great result, but it’s just not fun to be by yourself.”

Because there is no women’s class at Budds Creek, he only has an hour to rest until the gate drops for the second moto. That’s enough time for him to think about how to improve in the next moto and recuperate. At 3 p.m., it’s time to go racing again. At the drop, Hahn got another decent start, finishing his first lap inside the top ten. But he was already too far behind to be able to catch the top guys.

“If they’re already a few seconds ahead on the first lap, it doesn’t matter if you’re going the same pace or not,” he said.

He wasn’t all alone this time around, though. Hahn battled it out with several other riders, including Jason Anderson, who managed to cross the checkers three seconds ahead of him. Though his seventh place in the second moto left him with a solid seventh overall, Hahn wasn’t pleased with the result.

“I guess you could say [today] was mediocre,” he said. 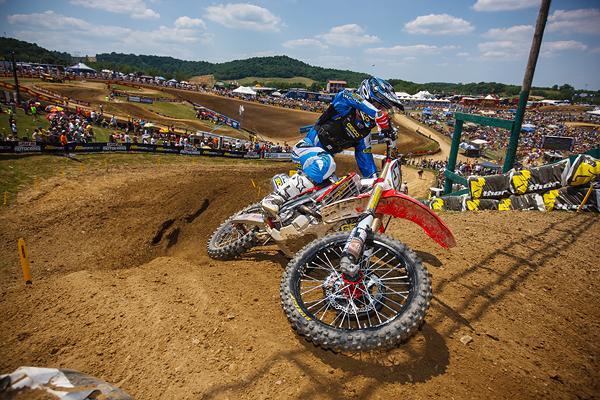 With a two-week break, Hahn is looking to continue the rebuilding process.
Simon Cudby photo

With two weeks off until the next race, Hahn said it is time for everyone to rest up. Hahn sits in sixth overall in points, twenty-three behind Red Bull KTM’s Frenchman, Marvin Musquin, the man many consider as next in line behind the “Big Four” who have dominated the 250 class thus far.

With two weeks to regroup, Hahn is ready to see where he stands after the break. That, and he’s excited to ride at RedBud again.

“I always look forward to RedBud and Millville,” he said. “There’s sort of an appreciation at RedBud because it has the best fans.”

After a lost season last year to injury, Hahn is working hard to make sure this one doesn’t end up the same way. Sixth in points in a super-talented 250 field shows he’s headed in the right direction. RedBud and Millville stand as his next step in the rebuilding process.