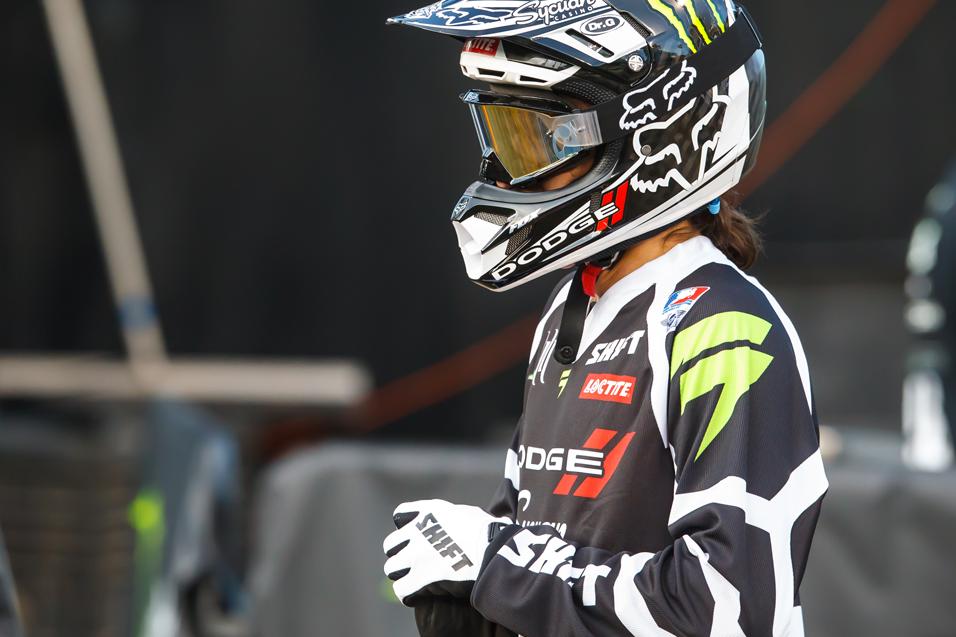 Cole Thompson - Concussion
Comment: Thompson knocked himself out in Toronto after crashing hard in practice. Thompson plans to return to racing in New Orleans.

PJ Larsen - Foot and Knee Injury
Comment: In Toronto, Larsen went down hard during practice in a rhythm section, sustaining injuries to his knee and foot. Larsen will not be racing in Houston.

Josh Hill - Broken Tibia
Comment: Hill suffered a broken tibia (lower leg) in his first turn crash at A1. The injury is not related to Hill’s previous leg injury that kept him away from the races last year. According to a press release from the Dodge Motorsports/Hart and Huntington team, Josh Hill will finally make his return to racing this weekend in Houston. 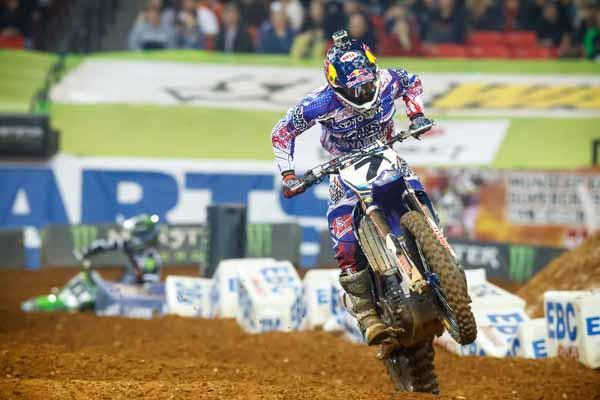 Stewart announced today that he will be racing in Houston.
Simon Cudby photo

Gareth Swanepoel - Knee
Comment: Swanepoel tweeted earlier this week that he “had a little tune up on” his knee earlier in the week to repair some wear and tear.

Josh Hansen - Ankle and Knee
Comment: It was originally thought that Hansen’s ankle was twisted, but Hansen found out before Indianapolis that he does indeed have a small fracture. Then he twisted his knee in Indy practice. Hansen will not be racing this weekend in Houston.

Kevin Windham – Back
Comment: Windham tweaked his back during a crash in Indianapolis with Mike Alessi in the main. After undergoing therapy, Windham was able to race in Toronto. Windham has continued with therapy this week, and is in for Houston.

Kyle Cunningham – Cracked Wrist
Comment: After crashing hard and hitting his head in Indianapolis, Cunningham took last weekend off, but is planning to return to racing this weekend in Houston. Cunningham is still suffering from a small fracture in his wrist incurred at the Eastern Regional Supercross Lites opener in Dallas.

Nick Wey – Hematoma and Muscle Tears
Comment: After a big crash in his Indianapolis heat race, an initial CT scan indicated no hernia for Wey, but he has a hematoma and three tears in his adductor and low abdominal muscles. Wey says that he is still hurting from the crash, and will not be racing in Houston.

Ryan Dungey - Broken Collarbone
Comment: Dungey underwent surgery to repair the damage sustained in a crash prior to St. Louis. Dungey is expected to be back on the bike within two weeks, but at this time it is unknown whether or not he will race the last few races of the supercross season.

Kyle Partridge - Cut Foot, Broken Toe and Broken C3 and C4 Vertebrae
Comment: Partridge had a run-in with the over/under bridge during practice in St. Louis, which resulted in several injuries. Partridge, who has full movement of his limbs, underwent surgery to stabilize his neck. Currently, there is no timetable for his return.

Ben LaMay - Concussion and Fractured Right Hand
Comment: LaMay crashed hard in his heat race in St. Louis, prompting a red flag. LaMay’s hand has not healed yet, and he will not be racing in Houston. 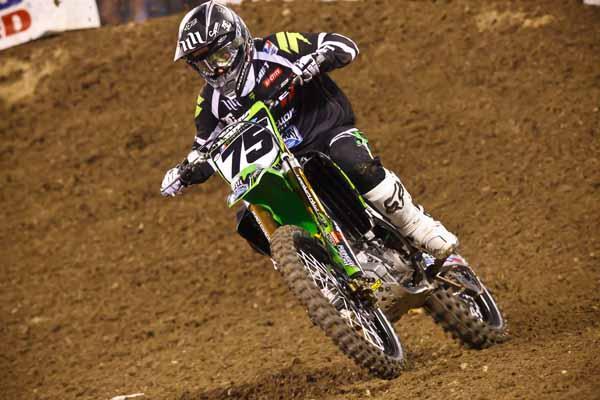 After missing all but one race in 2012, Anaheim 1, Josh Hill is scheduled to make his return in Houston.
Simon Cudby photo

Austin Stroupe - Cracked Collarbone
Comment: Stroupe had a big crash in Dallas, and was forced to undergo surgery for an injured collarbone. Stroupe is recovering in Northern California, and although he initially hoped to return to racing in Houston, he will not be lining up on Saturday night.

Justin Starling - Torn ACL
Comment: Starling was the replacement for Gannon Audette, but now he will be out for the rest of the supercross season with a torn ACL. Starling hopes to return for the Nationals.

Eli Tomac - Fractured Elbow
Comment: Tomac suffered a minor fracture in his elbow in San Diego. Tomac is back on the bike and is preparing for his return to racing when the Western Regional Supercross Lites series resumes in Seattle. 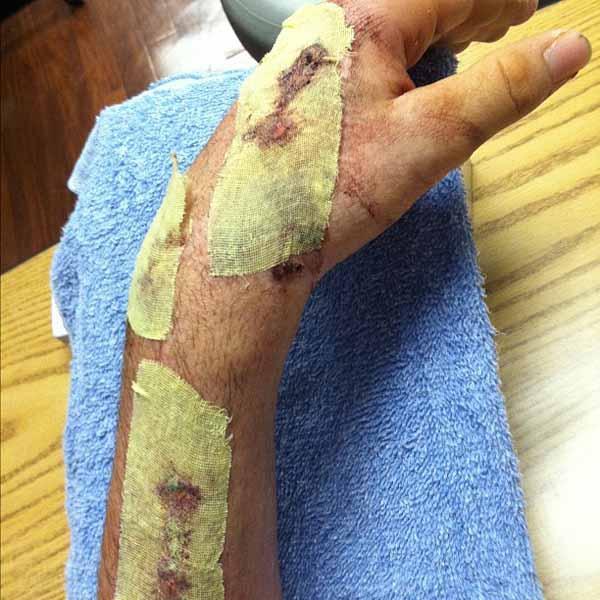 Gannon Audette underwent surgery this week on his wrist and tweeted out this photo.

Andrew Short - First Degree Separation of AC Joint
Comment: Short was injured after going down and getting run over on the start of the San Diego supercross. Short participated in practice in Dallas, but the pain was too great to race. After undergoing therapy, Short has begun riding again.  We will not see him line up this weekend in Houston.

Ryan Sipes - Broken Hand and Separated Shoulder
Comment: Sipes underwent surgery on February 9, but has begun riding. Sipes is planning on being ready to race when the Western Regional SX Lites series resumes in Seattle.

Tyla Rattray: Vertebrae
Comment: Rattray suffered a concussion and a fractured C-7 vertebrae in his heat race in Oakland. Rattray’s bone has not yet healed, and so far he has been unable to get back on the bike. At this point, it is unlikely that he will compete in any of the remaining supercross races.

Trey Canard - Injured Back
Comment: After a terrible crash in Los Angeles, Canard was released from the hospital on January 29 and was able to return home. Canard is not expected to ride for six months. Canard underwent surgery earlier this week, but it was to remove some hardware from previous injuries.

Chris Blose - Injured Shoulder
Comment: Blose suffered an avulsion fracture, severe bone contusion and a slight labral tear in L.A.. Blose is currently in rehab, and expects to be 100 percent in a few weeks. 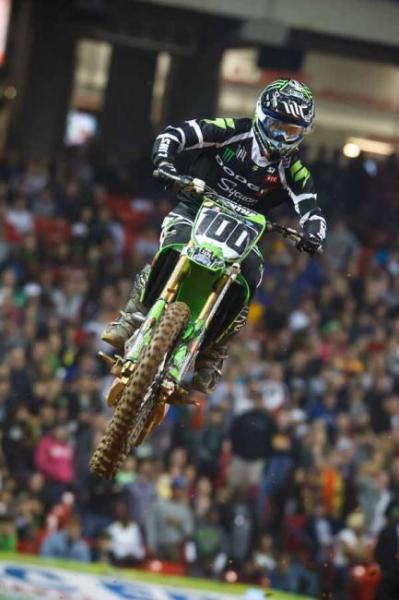 Hansen has been ruled out for Houston with ankle and knee injuries.
Simon Cudby photo

Ivan Tedesco - Broken Finger
Comment: Tedesco got landed on in L.A., and although he initially hoped to return to racing in Houston, he will not be racing this weekend.