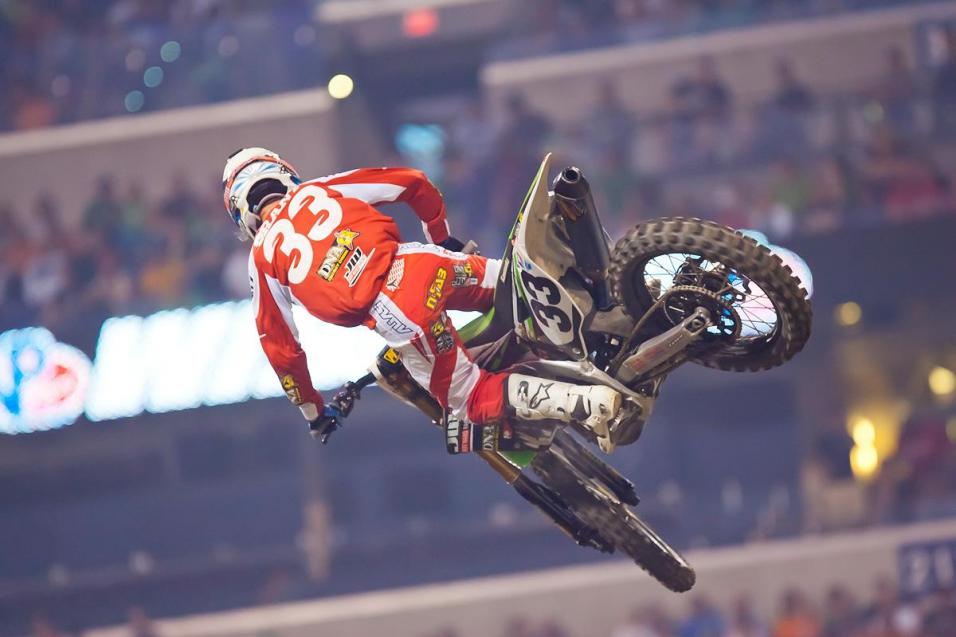 March 20, 2012 11:50am
by: Jason Weigandt
Lucas Oil Stadium Indianapolis, IN Indianapolis Monster Energy AMA Supercross Championship
Indianapolis used to be one of the softest, ruttiest races on the SX tour. Somehow it has morphed into the exact opposite, as most riders said this year’s Indy track was the hardest, slickest surface of the season! As a result, riders had to be careful to avoid washing out, though many did end up sampling the soil anyway.

Yes, injuries were once again the biggest story of the day at Indy. This is getting out of hand! Motosport.com/TiLube/Foremost Insurance rider Nick Wey went down in his heat race and was out for the night—we’re waiting for an update, but we believe he could be out for a bit. Kyle Chisholm went down in the main event on his DNA/JWR Kawasaki. Yesterday Chisholm told us he hurt his wrist, ribs/back, hip, and shoulder. Ouch! Chizz says the shoulder is the biggest issue. He’ll have it checked out later this week before deciding to race Toronto or not.

Rockstar Energy/Star-Valli Yamaha’s Kyle Cunningham has taken quite a few lumps this year, as he found out before the Indy race that he actually has a small fracture in his wrist dating back to his Dallas SX crash. So he’s been riding hurt the whole time! Then it went from bad to worse at Indy with a first-turn crash in the main, and then a big crash five laps in that caused the red-flag restart. Cunningham texted us yesterday, saying, “A little sore, will have a follow up this week but feeling better. I’m not giving up, that’s for sure.” 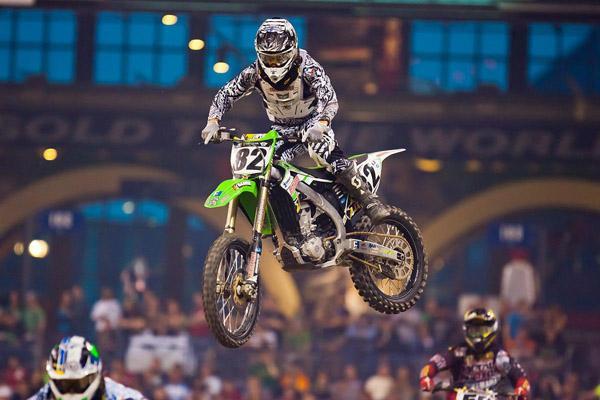 How about some love for Pooh Sipes? Finished a solid 12th in the SX Class.
Fredrickson photo

Good news is some riders did return from injury, including Chisholm’s teammate Josh Grant. JG had busted up his shoulder blade early in the season, but his return was solid, netting him a respectable eleventh in the main.

Also back was Nico Izzi, who missed a few 450 races with a sore wrist. The Rockstar Energy Drink/Star-Valli Yamaha rider scored an impressive tenth in the SX main. Weston Peick, a fill in rider for a couple rounds with Star-Valli, was back on a Kawasaki and right in front of him with a solid ninth. 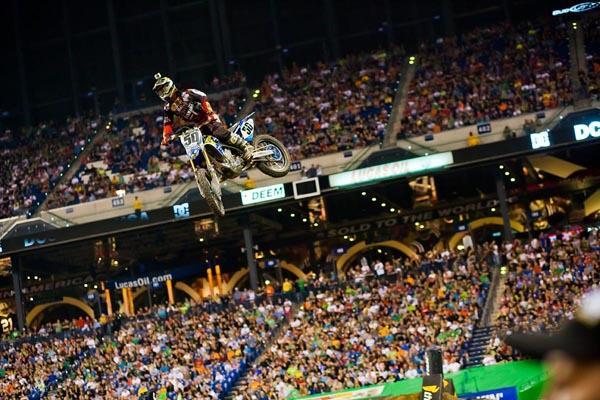 Nico Izzi is back after a few weeks healing a bum wrist.
Fredrickson photo

Oh, and Josh Hansen’s injury woes are building too! Hanny had been nursing a sore ankle for a few weeks, then he twisted his knee in Indy practice and sat the race out. Hanny had been building a solid season for the Dodge Motorsports/Hart & Huntington team, but the last few weeks have been tough.

But Hanny did have a new teammate in Kyle Regal. This was good timing, as Regal ended up as the only H&H rider in the main event. He finished sixteenth.

Justin Sipes also had a great ride in the SX main, taking twelfth on his Motosport.com/TiLube/Foremost Insurance Kawasaki. We believe that is a career best for the man they call Pooh Sipes.

Kevin Windham also crashed out of the main when he got crossed up with Mike Alessi, who was trying to avoid an errant tough block while also jumping a rhythm lane. Windham was said to have a sore back. We’ll have updates on all of these injuries later in the week with our injury report. It’s a lot to keep track of!

He didn’t get hurt, but Jake Weimer didn’t have a good night in Indy. The Monster Energy Kawasaki rider crashed along with Wey in his heat, then got a terrible start in the LCQ and ran out of time trying to come through the pack. He ended up not qualifying for the main. 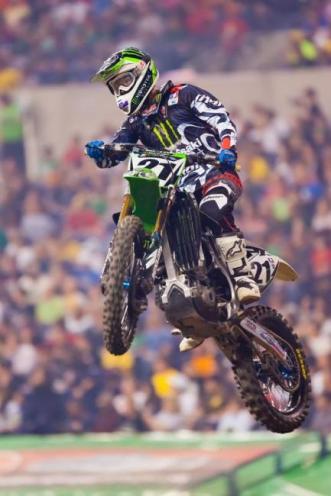 Not a good night for Weimer.
Fredrickson photo

Mike Alessi told us after the race that his bike started cutting out while he was leading the SX main. He hung on to finish sixth.

Not a good night for the Stewart family: James crashed out of his heat race and was out for the night. He sent out a message on Monday saying he’s waiting to find out his status for Toronto. Then his brother, Malcolm, had yet more setbacks, leading him to a last-lap scramble to make the main from the LCQ. He came together with veteran Kelly Smith trying to get the last transfer spot and crashed, knocking him out of the main. Malcolm sits ninth in Lites East points on his J-Star/JDR KTM.

Les Smith had a rough start to his season for the Ohlins/Langston Motorsports KTM team, but he has turned things around a bit. After eleventh in Daytona, he scored his first top-ten of the season with ninth in Indy. Said team manager Grant Langston, “I am so happy for Les, he’s such a good kid and really earned this result. I knew it was only a matter of time before he would be in the top ten and I know he will now only work harder to continue improving.”

Two-time and current AMA Arenacross Champion Tyler Bowers enjoyed his best night since jumping back into the Lites SX scene. Bowers got great starts on his Monster/Babbitts Kawasaki and took fourth in his heat and eighth in the main.

He has missed two races in a row, but Red Bull KTM’s Ryan Dungey is still second in the SX standings!

Best of the rest? Just 14 points separate fourth-place Davi Millsaps from eighth-place Jake Weimer in the standings. The Millsaps-Windham-Brayton-Metcalfe-Weimer group has gone back and forth all year.
Read Now
November 2020 Issue Now Available