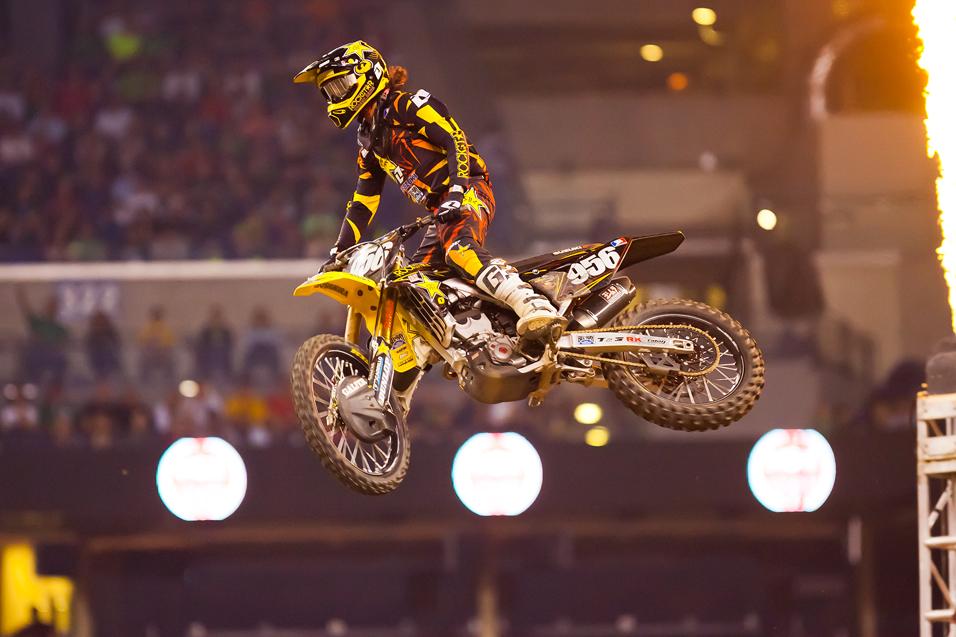 March 20, 2012 11:15am
by: Steve Matthes
Lucas Oil Stadium Indianapolis, IN Indianapolis Monster Energy AMA Supercross Championship
Rockstar Energy Drink Suzuki’s Blake Wharton has logged a solid year so far in Lites East, but he went to another level with his victory on Saturday night in Indy—making him the first rider not named Justin Barcia to win a Lites East race. Matthes caught up to Blake after his ride.

Blake Wharton: It was weird! I’ve never seen anything like it, and I don’t know if we’ll race like that again. That kind of thing is few and far between. Unfortunately, if we have them, someone has crashed, and we don’t want that. The regular start of the race was good for me. I worked my way up to third, and then the red flag came out. I’m so used to the red flag rule, you just go back to the gate. Out west, they’ve had a lot of red flags, and they’ve always gone back to the gate. So you kind of think that’s just the way it goes. You know, I haven’t been reading up on the rule book lately, you know, before I go to bed or anything! But I have no problem with it.

Even before the restart you had already passed a few guys so you were already kind of feeling it.

I was feeling it tonight. You have to kind of wing it out there when you’re racing. But you have to stay up at the same time, too. It’s cool, it’s cool to win it.

Pretty uneventful main after that. Roczen went down, you got the lead and kept the guys at the same distance.

At that point I did my own thing. Rode my own race. I didn’t have anyone directly on me, so there wasn’t any direct pressure, but there’s always pressure when you’re leading. I felt like I handled it good, and pretty much did my own thing, like I said. I’m just going to try to carry this forward into the next week and then into the following week.

The whoops looked kind of sketchy.

Talk about working with Randy Lawrence here with the team. You said you’ve been learning a lot.

Yeah, I’ve actually been living in California, three weeks before Halloween through now. And I’ve been working with Randy. It has been months, and I’m going to keep staying out there even more, to outdoors, and I don’t even know when. I haven’t even been in Texas. We’ve been training, we’ve been riding bicycles, we’ve been doing a lot of stuff. I feel good and I feel strong so I’m going to continue to do it.

Is this a little bit of redemption? The GEICO guys let you go. Maybe they didn’t think you could win again?

No, the GEICO guys are good, they’re good guys. I rode for them for a long time, four years. So I have relationships over there, but to come here is even better, I think. The team is great over here, I have a great mechanic, and the team has been supporting me through all the months and months getting ready for this. They developed a great bike. It wouldn’t be possible without a great bike. It takes more than just a fast lap out there, as everyone can see, it takes a lot of things.

So, no "Suck it, GEICO" on the buttpatch next week?

No, none of that. I’m not all about that!