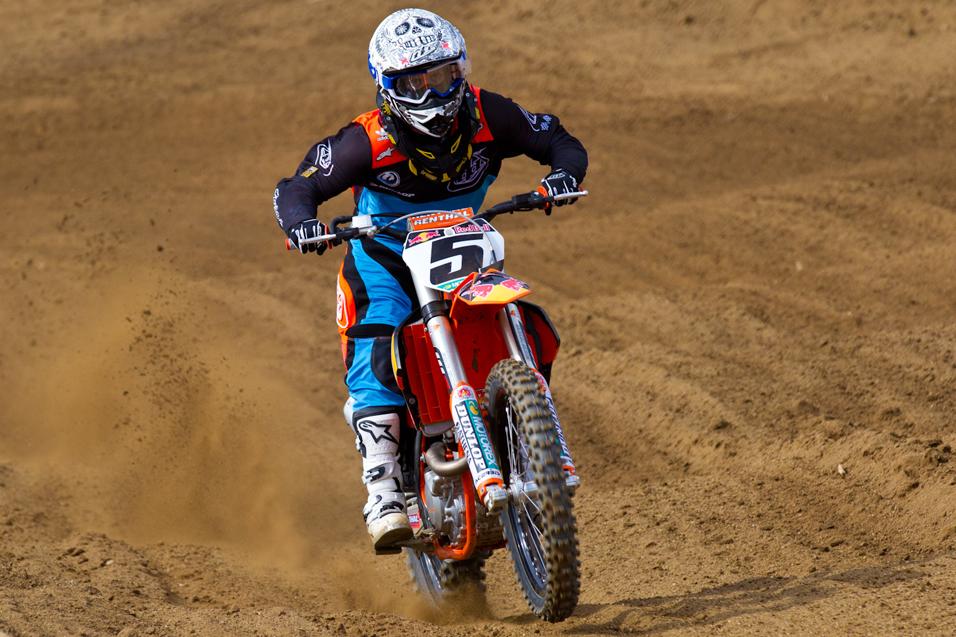 As motocrossers, we seem to be a superstitious bunch.  I've heard a lot of stories of things riders do at the track, including myself.  So, in reference to Chad Reed's crash at Dallas, has anyone else noticed, besides me, that his Shift gear looks like he's wearing a big #7 on the front of his jersey?  And the rider who uses that number tends to spend a lot of time on the ground.  Just sayin.

I hadn’t noticed that before but strong work pointing it out. I don’t like to admit to being superstitious. In fact, I usually heckle riders with ridiculous rituals and pre-race habits. Sorry, but wearing the same pair of underwear every single weekend just because you won in them once isn’t going to make you ride better. It just isn’t. Despite finding that stuff silly I always put my left knee brace and boot on before my right. I don’t believe that I’m going to crash if I switch things up but changing that routine just doesn’t feel right. I doubt Reed knows there is a # 7 on his gear. And even if he did see the number I doubt he would be superstitious about it. Then again, he’s got some time on his hands now. Maybe he should help those guys redesign the front of that jersey?

I've always been a Doug Henry fan from the time I snuck in to the infield mechanics area at Unadilla 95' and ran from one fence to the other to watch the race with a then recovering Doug Henry in a full back brace. Anywho, I'm amazed by the video's of him riding his wr-yz 450 around the track jumping every thing and I've got a mission for you should you choose to accept! How bout you do a test of Doug's hybrid bike? I would love to here input from an active 2-wheeler rider.

It’s hard to NOT be a fan of Doug Henry. The problem with this idea though is twofold: First, I don’t think I could even climb onto that thing and ride it. Between the roll cage and the articulating tractor seat it would feel more like a John Deere than a dirt bike. And, secondly, it would seem odd and almost disrespectful to write a story about what it’s like riding a bike designed for a guy in a wheelchair. I’m not overly superstitious but I also don’t like to tempt fate. Besides, Doug is about as active as a rider could be. Why don’t we just ask him what it’s like?

With St Louis being this weekend I was wondering if they take any added security measures in the pits or around the stadium. It isn’t known as the safest city in the world.

I’m pretty sure the stadium handles security at each venue and they have a good understanding of how many guards are necessary to maintain order. This round usually keeps the pits inside right next to the stadium too, so that helps. What they need to do is hold some Raise it Up tryouts in the pits and check out the local talent. I’ve been riding a motorcycle since I was five and I can’t ride a wheelie as good as the worst guy on that squad. Doug Domokos was a joke. They should have the Wildout Wheelie Boys doing some one-handed rippers up and down the start straight and around the perimeter of the track as part of the opening ceremonies. Actually, that is probably a terrible idea. Oh, here it is: Get those guys on the security squad and have them ride wheelies around the parking lot looking for thieves and troublemakers. Boom. You’re welcome, St. Louis security.