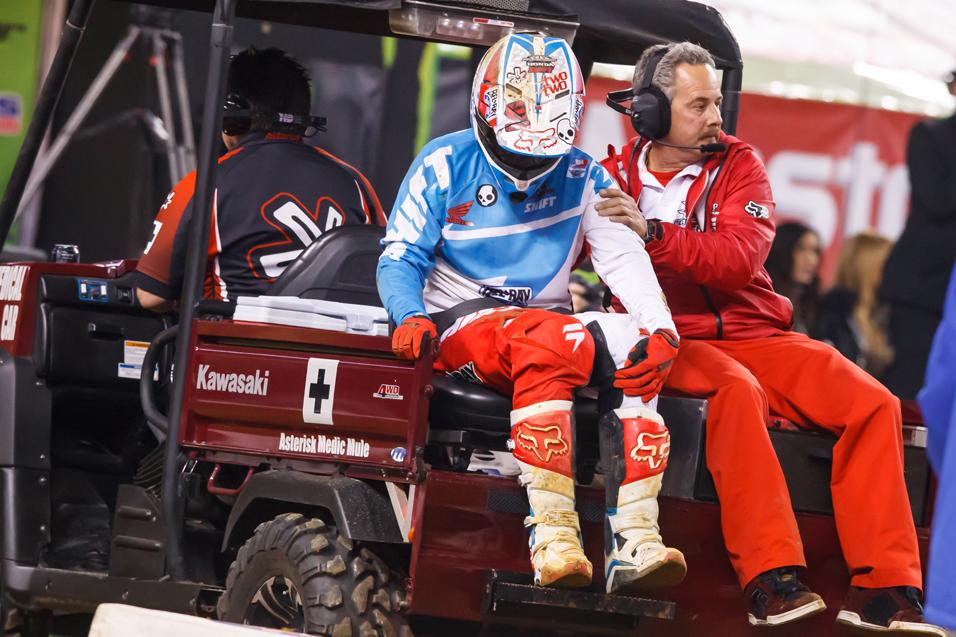 Chad Reed - Broken Tibia and Fibula, Two Broken Ribs, Broken T6 Vertebrae and a Torn ACL
Comment: The injuries that Reed sustained in Dallas have forced him to withdraw from the remainder of the 2012 Monster Energy AMA Supercross series. Reed’s goal is to be ready for the outdoor series, although that objective will be reassessed following surgery.

Austin Stroupe - Cracked Collarbone
Comment: Stroupe had a big crash in Dallas, and will be out of action for at least two weeks. On Feb. 20, Stroupe tweeted the following: “On my way up to doctor Tings surgery later tonite he’s saying its goin to be a quick recovery 2 weeks max.”

Nico Izzi - Sprained Wrist
Comment: Izzi is still feeling the effects of his crash in Phoenix, and will undergo surgery next week to fix some problems. On Feb. 22, Izzi tweeted the following: “The bright side is I’ll only be out for a week they just gotta go in and clean up some stuff I tore from phx race 6 weeks ago.” Despite the injury, Izzi is planning on racing a 450 in Atlanta. 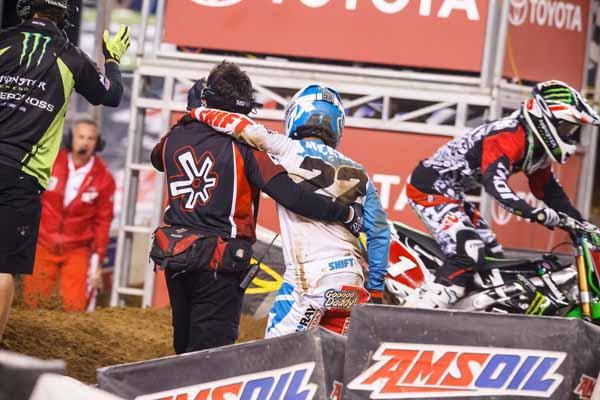 Reed was miss at least the rest of the SX season after a big crash in Dallas.
Photo: Simon Cudby

Andrew Short - First Degree Separation of AC Joint
Comment: After going down and getting run over on the start of the San Diego supercross, Short was left feeling pretty banged up. Short participated in practice in Dallas, but the pain was too great to race. Short is currently undergoing therapy, and will not be racing this weekend in Atlanta.

Tommy Weeck - Concussion
After a practice crash in Dallas, Weeck will miss Atlanta with a head injury. Weeck hopes to return in St. Louis. Weeck tweeted this earlier today: “Well guess its official I won’t be makin Atlanta this weekend. My head is still not ready from my crash last weekend.”

Kyle Peters - Slightly Separated Collarbone
Comment: Just days before Peters was to make his professional debut in the Eastern Regional Supercross Lites series, he injured his collarbone. The injury will keep Peters off the track for two to four weeks.

Heath Harrison - Dislocated Hip and Torn Spleen
Comment: There is currently no timetable on Harrison’s return.

Sean Lipanovich - Broken Collarbone
Comment: Eastern Regional Supercross Lites rider Lipanovich underwent surgery for his injury and had a plate and eleven screws installed to repair the damage. Lipanovich is hoping to be back racing by St. Louis.

Ryan Sipes - Broken Hand and Separated Shoulder
Comment: Sipes underwent surgery on February 9, and is expected to be out for six weeks. Sipes is planning on being ready to race when the Western Regional SX Lites series resumes in Seattle. 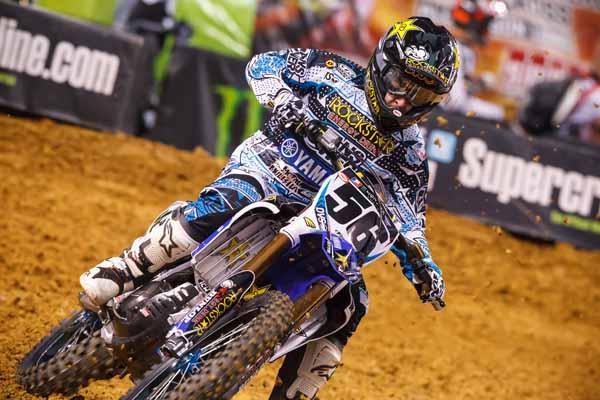 After a big crash in Dallas, Austin Stroupe is expected to miss at least two weeks.
Photo: Simon Cudby

Tyla Rattray - Concussion and Fractured Vertebrae
Comment: Rattray suffered a concussion and a fractured C-7 vertebrae in his heat race in Oakland. Rattray will spend a few weeks recovering, at which time his injuries will be reevaluated.

Chris Blose - Injured Shoulder
Comment: Blose suffered an avulsion fracture, severe bone contusion and a slight labral tear in L.A.. Blose originally thought surgery was in order, but tweeted the following last week: “No surgery for my shoulder! Just got to wait for my fracture to heal. 6-8 weeks!!!”

Ivan Tedesco - Broken Finger
Comment: After getting landed on in L.A., Tedesco will be out for six to eight weeks. The good news? Tedesco had a pin removed from his finger last week, and is expecting to have the remaining two pins removed next week. 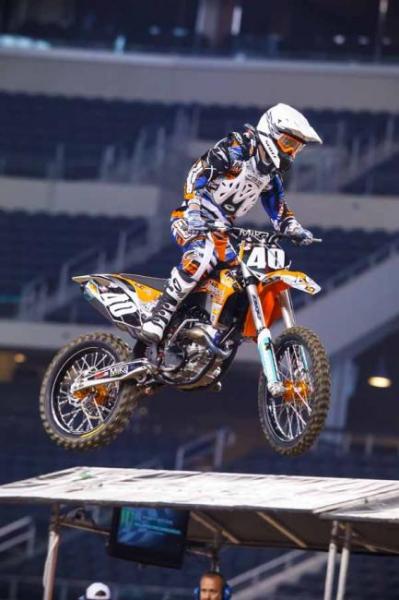 Gannon Audette will miss the rest of the SX season after breaking his wrist in Dallas.
Photo: Simon Cudby

Tommy Hahn - Broken Fibula
Comment: After breaking his fibula in Phoenix, Hahn tweeted this week that he was “Aiming for this week sometime” to get back on the bike. Hahn hopes to be racing again in Houston.

Josh Hill - Broken Tibia
Comment: Hill suffered a broken tibia (lower leg) in his first turn crash at A1. The injury is not related to Hill’s previous leg injury that kept him away from the races last year. Hill is likely to return to racing in St. Louis. 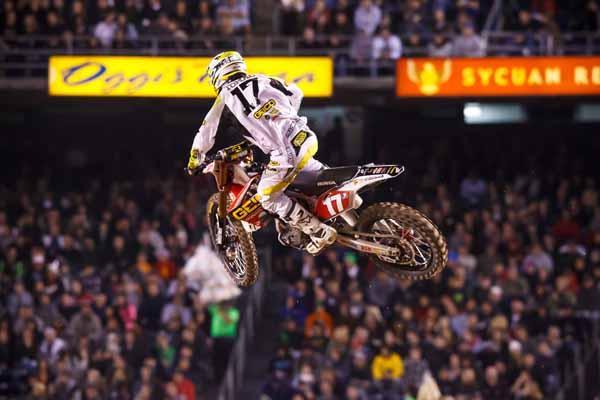 Tomac suffered a minor fracture in his elbow in San Diego but will be ready when the West Region returns.
Photo: Simon Cudby

Michael Byrne - Broken nose and C-6 in Neck
Comment: After spending several weeks in a neck brace, Byrne’s recovery is going well. Byrne has resumed cycling, and is getting close to returning to the racetrack, as evidenced by this tweet last week: “Doc visit went good today still not ready but really good to see the progress from my last X-ray. Getting closer tho!”

Jimmy Decotis - Multiple Fractures in Feet
Comment: Jimmy D has started riding again, and is taking his recovery day by day. A final decision on his return has not yet been made.

Jared Browne - Broken Ribs and Torn Spleen
Comment: Browne has resumed riding, and is planning to return to racing this weekend in Atlanta.

Alex Ray - Collarbone
Ray suffered a broken collarbone in San Diego. No timetable has been set on his return.

Jason Potter - Broken Collarbone and Scapula
Comment - Currently, there is no timetable on Potter’s return.

Taylor Futrell - Badly Broken Collarbone
Comment: Futrell underwent surgery for the injury, and has resumed riding. He is hoping to be back racing by St. Louis.