San Diego, Calif. (December 31, 2011) – Just after midnight on the East Coast (9 p.m. Pacific) Levi LaVallee and Robbie Maddison soared over 300 feet of water, and when they safely landed, both established new world records for distance jumping on a snowmobile and motorcycle, respectively, at Red Bull: New Year. No Limits. The event was telecast live from San Diego, Calif., on ESPN, ESPNHD and ESPN3.

LaVallee, a 29-year-old native of Longville, Minn., who was slated to jump in the same event last year before a testing accident derailed his New Year’s plans, redeemed himself in a big way - by breaking his existing certified world record of 361 feet with a leap of 412 feet 6 inches. 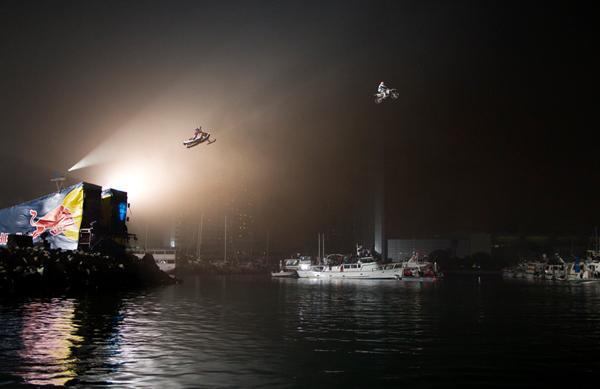 Soon after the fog blanketing the event site cleared, the two athletes blasted toward the take-off ramps on the North park at Embarcadero Marina Park in the downtown area of San Diego Bay, and launched across the 300-foot water gap, touching down on the massive landing ramp on the South park. A capacity crowd of thousands packed the park and got an early jump on their New Year’s Eve celebrations.

“I’m as excited as I think a person can be,” said LaVallee. “I just landed an over 400-foot jump. I’m not sure how the sled’s doing, but I’m OK, so it was good. It’s an amazing feeling. You have no idea how pumped I am.”

“It’s a cool feeling to do what I do and have the backing I do,” said Maddison. “I was confident we were going to go a long way tonight and we’re going to come back and go even further.”

Check out the video footage HERE.

Maddison boasts an accomplished freestyle motocross career, with an X Games silver medal in 2010 in Moto X Best Trick and two wins on the Red Bull X-Fighters World Tour (Calgary 2009 and Madrid 2010). He also has a successful history of record-breaking achievements and globally captivating feats. Among them are backflipping across the Tower Bridge in London and clearing the Corinth Canal in Greece, to go with his previous New Year’s Eve successes, beginning in 2007 when he jumped his motorcycle 322 feet over a football field in Las Vegas and followed it up in 2008 by jumping onto – and off – the 96-foot-tall Arc De Triomphe at Paris Las Vegas.

LaVallee is a seven-time Winter X Games medalist (four golds) and champion snocross racer. He is widely known for becoming the first person to double backflip a snowmobile in 2009 at the Winter X Games. Despite the temperate climate in San Diego, LaVallee used artificial turf on his run-up path, which provided the necessary grip for his snowmobile’s track to ensure maximum speed as he hit the take-off ramp.

Red Bull’s annual New Year’s Eve celebration highlights extraordinary athletes pushing their physical, mental and technical limits to break boundaries and records. Leading up to their big night, LaVallee and Maddison worked with Red Bull’s athlete performance experts, physicists and engineers, in addition to their core teams, in an effort to get the most out of their bodies and machines. Valuable information has been attained with the goal of integration into future technological and athletic development.

After last year’s unfortunate cancellation, this was the fourth Red Bull: New Year. No Limits. event in the last five years. In 2008, the year Maddison went up and off the Arc de Triomphe, Rhys Millen backflipped an off-road truck. In 2009, Travis Pastrana jumped his rally car a staggering 269 feet over water, landing on a barge in Long Beach’s Rainbow Harbor.

Mystik Lubricants, title sponsor of LaVallee’s race team, is excited to partner with Red Bull in showing support for Levi during his record-breaking achievement.