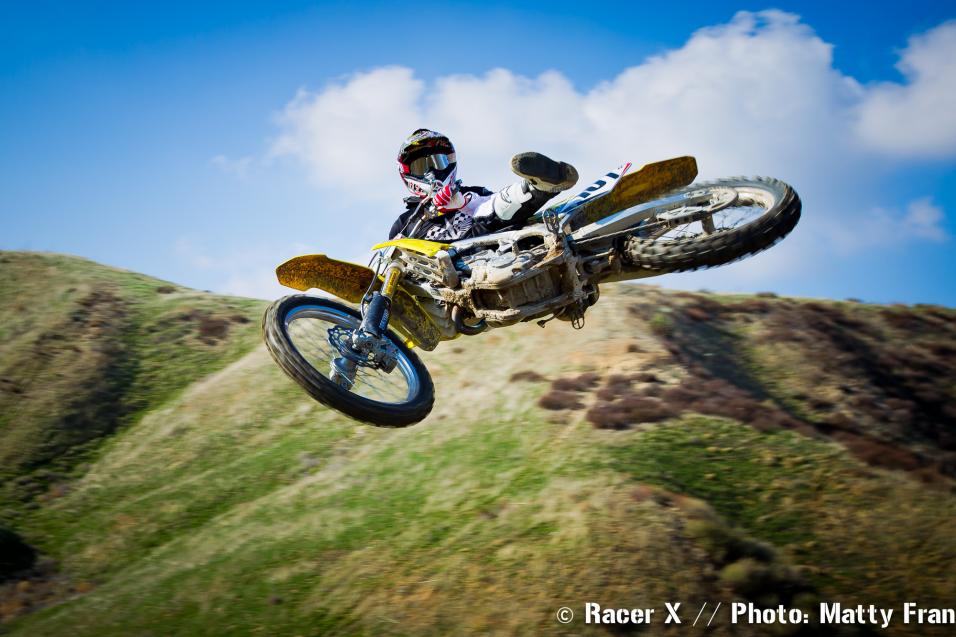 I didn't realize it until I saw you and Matthes do a Classic Commentary of your win at the '95 San Jose SX, but I actually helped you pull that off.

I'm the guy in the purple sweatshirt holding up Casey Johnson's bike so nobody runs into him and they don't red flag the race. I remember stressing that they were going to throw the red flag and re-start the race and that woulda put a damper on things.

I had some help that night. Huffman going off the track in the first turn was big. He was on fire that year and I don’t think it would have happened for me that night without a little help. And then there was you, Mr. Purple sweatshirt guy, holding Casey Johnson’s bike while he sprawled out on the ground with a broken femur. Thank you…. Couldn’t have done it without you.

If you stole a Camel Supercross hay bale cover I’m sure KW would love to have it. But why would you want to give it to him?

I know that riders train hard during the off-season to be ready for Anaheim. I know that. But are there any behind-the-scenes training secrets that we “regular folk” aren’t privy to? I’d love to get a head start on my 30-plus class competitors here in Minnesota. What are the tricks?

Well, Zach, this is a tough question. Of course riding the motorcycle is critical and strength training is important. There is the cardiovascular training, which helps, obviously. But there is more to it than that. I’m not really supposed to say anything about this. There is an unspoken code, not unlike the chemically enhanced gentleman who compete in that big bicycle race in France. Except in our sport it is a specific piece of exercise equipment. Imagine if the Bowflex home gym actually made Chuck Norris as awesome as he is. Can you get your mind around that? The flimsy metal bars actually made his roundhouse kick what it is today… skull-crushing. An addition to the Seven Wonders of the World. Well, this piece of exercise equipment does just that for motocross racers. I’m hoping few people actually read this because I could get in trouble for divulging this information. Please keep it to yourself. And enjoy the training. Click HERE to for the video.

I got back into riding after a long absence thanks to the military and college and I need you to fill me in on a couple of things:

Thank you for your service in our armed forces and thank you for taking the initiative to go to college. Hopefully I can help get you up to speed.