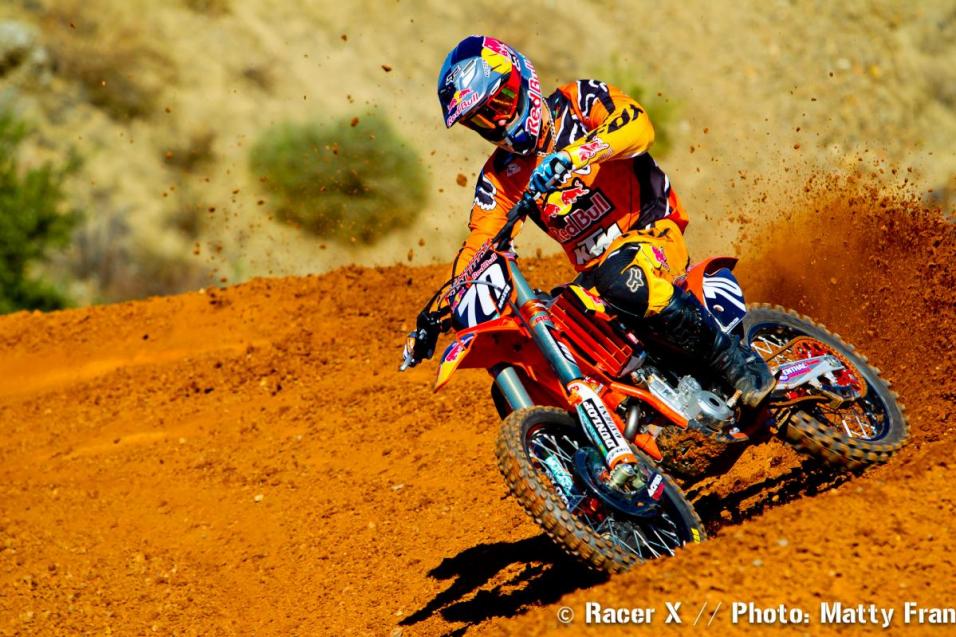 Another world champ, another injury learning the craft of supercross. Ken Roczen is not the first Grand Prix hero to show up on these shores only to be grounded by a crash. The list goes all the way back to Greg Albertyn, who's catalog of crashes was Seth Enslow-esque. Sebastien Tortelli was next. Then Alessio Chioidi (remember his SX misadventure with Husqvarna?). Later it would be Grant Langston (though he figured it out and then some), Tyla Rattray, Marvin Musquin (who was actually hurt at the Bercy SX).... And now K-Roc.

Why all the problems? Supercross is the achilles heel of Europe-based riders, though it's no fault of their own. There simply is no tangible supercross tour in Europe for them to learn the trade on before they come to America. And once here, the expectations are high and the learning curve steep. Roczen, the youngest of the riders mentioned above to land in America, has already shown stadium skills, winning the Vegas SX last year, but don't forget the heavy crashes he suffered before reaching the winner's circle.

But maybe this is a blessing in disguise for the Red Bull KTM team. It now forces Roczen into the East Region, which starts almost two months later, and gives them twice as many chances to win races, as Musquin will ride alone in the West Region now. It also should help out with team chemistry, though Roger DeCoster told us last week that Ken and Marvin, former rivals in Europe, were getting along great as teammates about to start battling together at Anaheim. Now the focus will be on Marvin in January, with Ken's turn coming in mid-February, when we get to finally see the answer to that fanatical bench-racing boast, "Justin Barcia couldn't beat Ken Roczen in his dreams."

I’m not going to lie, when the news came down the wire that Ken Roczen had broken his arm I was a little disappointed. While the injury doesn’t look to be serious, any injury this early in the season could potentially throw a wrench in the riders’ season. With that being said, Roczen is young and should bounce back fairly quickly.

While this injury won’t necessarily effect Roczen’s season, it does hinder the plans of KTM. The plan for the Orange Brigade in 2012 was to have Roczen and his foreign counterpart, Marvin Musquin, both race West Coast Lites and then race the 350 in the premiere class for the East. Well that planned is squashed now. But it does open the door for this…

The battle the industry has been clamoring for since Roczen announced he would be riding full-time in the States for 2012—Roczen vs. Justin “BamBam” Barcia. And what a better place than Jerry Land—the monstrosity that is Cowboys Stadium—to kick things off.

They say that Red Bull gives you wings, but in Ken Roczen’s case, he just ended up with a broken one. Yes, that’s right, another rider has been injured just days before the season opener in Anaheim, and in this case, it’s a broken left arm for Red Bull/KTM’s Roczen.

Living in Northern California makes me primarily a West Coast guy, and I must admit that the news of Roczen’s injury put a big damper on my mood. After all, not only is Roczen a fantastic racer, but his jump combos and whips during practice are absolutely electrifying to watch as well. I’m even thinking of nicknaming him, The Breakfast Cook, because it seems like he spends almost every practice session serving up whips that are flatter than pancakes. The dude definitely cooks, but unfortunately for the West Coast fans, his broken arm means they won’t be filling their plates at the Roczen buffet this year.

Fortunately, it’s not a total loss. In fact, the silver lining on this cloud is more like a platinum coating when you consider the fact that fans will now get to see Roczen go head-to-head with Justin Barcia on the East Coast. How cool is that? Both of these guys race with more enthusiasm than an energy-drink-crazed 10-year-old tearing through the pits hunting down autographs, and they both want to win, badly. While I’m truly bummed for Roczen that he got injured, I’d be lying if I said I wasn’t excited about the battle of the east that is already brewing.

Poor Kenny Roczen, the German KTM kid broke his arm getting ready for the supercross series and although he’s probably bummed and upset, I think this is a great thing for the fans. I never understood KTM manager Roger DeCoster’s master plan of having Roczen and two-time World Champion Marvin Musquin both race the same coast. While not on the level of Roczen in my eyes, Musquin nevertheless is very fast and is a podium contender every race. Yes, a championship will be tough for Marvin in his first year in supercross but I still don’t see the logic of having only two riders on your team and throwing them both out there together. Besides, there’s a limit to how many MX2 World Champions we can have in one class at one time, I think.

So now the fates have intervened and Roczen will ride east coast and as I said, we’re all winners here folks. Defending champion Justin Barcia reminds many of Bob Hannah in style, demeanor and ability and there’s no way he’s going to let some “commie punk” come in and take his crown. As well, defending outdoor champion Dean Wilson is on the east side and he’s going to be a serious player for the title. Barcia, Wilson AND Roczen???? That’s just a ridiculous potpourri of talent and let me be the first to say that the east is where it’s at this year.

And somewhere in Idaho, the original Beast from the East is very happy about this.

These boys covered it here--the West's loss is the East's gain, especially with Barcia and Roczen (and maybe Wilson, Baggett or whoever Pro Circuit decides to send) set for a tangle. Barcia will be sporting the number-one plate, but there's no way you're going to see him just walk away--Kid-Roc just proved just too darned fast last year to not be a factor.

A different question: Does the injury point to a potential trend for Kenny? Is he too fast and too wild to stay healthy? I say no. Last year he took on one the most grueling schedules of any rider, racing West Lites SX and the MX2 GPs, on occasion racing on two continents on back-to-back weekends. He threw in a few indoor races on a 350, as well. He made it through with some bumps and bruises, but stayed away from the big one en route to a title in Europe. He was right in the thick of it with Musquin for the 2010 MX2 crown as well, so he's proven he can go the distance. In fact, talk to people who have watched Roczen ride a lot, and they don't throw out the compliments you expect for a teenaged star. It's not the speed, aggression or talent that sets Roczen apart, it's his smart riding and line selection. He rides wise beyond his years, so I expect him to be around, healthy, for many of them.