Advertisement | Advertise with Us
It was rare weather for Southern California – cold, dark and pouring with rain.  It was Monday and I was huddled with about 35 other motocross fans under the expansive awning of the MotoConcepts hauler, trying to stay dry and warm.

The rig was set up in a back parking lot at Milestone MX facility, with the purpose of serving as the colorful backdrop for the 2012 MotoConcepts photo shoot and team launch.

If only the weather would cooperate. The rain continued to come down, slow and steady. Riding a supercross track was out of the question, at least for the purpose of photography.

But, the show went on, and in the words of team owner Mike Genova, MotoConcepts races rain or shine.  After an early lunch, tables and chairs were rearranged and Genova took to the mic and started talking.

I wasn’t expecting much in the way of major news, as it was well known that the team had hired the Alessi’s (that’s Tony, Mike and Jeff) and would be working with a few other capable 250 riders as well. In addition, some of the major sponsors had been already announced. It thus had what appeared to be the ingredients of a pretty routine event.

But as I listened to Genova introduce his crew, and explain the somewhat odd marriage between Team Alessi and Team MotoConcepts, it became clear to me that there was something else going on. 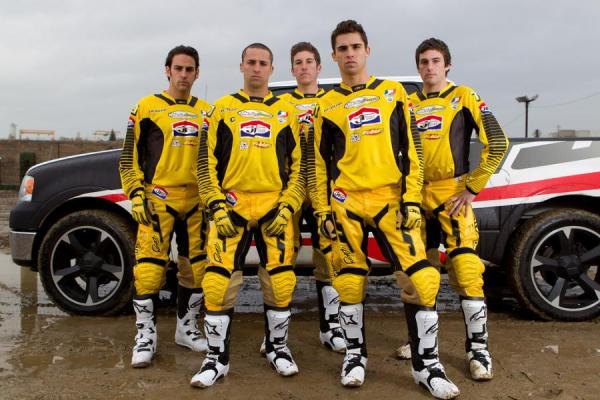 Mike Genova is an entrepreneur. Entrepreneurs are not always like “normal” people. They are outliers. They take risks, blaze their own path, and can often see things in a different way than the huddled masses.

Genova was able to build a highly successful business that manufactures and employs hundreds of people. The company – called Leisure Concepts – makes plastic accessories for home hot tubs and spa’s. They are based in Spokane, Washington, and sell their American made products all over the world.

Genova has been a lifetime motocross participant and fan, and after achieving moderate success with Leisure Concepts, he decided to jump into pro motocross back in 2007. Team MotoConcepts was born as an offshoot to Leisure Concepts, and with the goal to develop and sell a line of products. It didn’t hurt that the team also allowed Genova to attend the races as the ultimate fan. Despite what has been said by other media outlets, Genova is absolutely committed to success in both financial and racing terms.  As a newbie team owner, he has had a very steep learning curve over the past five seasons, and isn’t ashamed to admit it.

History is full of people who, like Genova, have bet against an established system. They blazed a unique and successful path, and have won big rewards. It doesn’t matter if it is business, sports, science or the arts, but contrarians have a track record for great achievements.

Genova has operated this team for the better part of five years, and by the end of the 2011 season, was growing tired of playing second fiddle to the factories.

He did what established “industry” people told him to do and tried to earn his way into becoming a factory “B” team, whereby the notion better access to parts and equipment, and maybe even a little money is supposed to bring podiums and championships. Despite some strong results and capable leadership through hiring David Vuillemin as Team Manager, it wasn’t happening for Mike. And with OEM support growing scarcer for 2012, Genova decided it was time to go a different direction entirely and not play by the established rules. 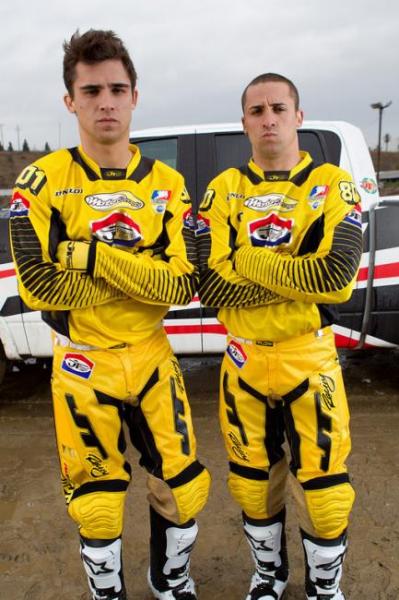 Jeff and Mike Alessi look to be the face of MotoConcepts for 2012.
Photo: Carlos Aguirre

At the same time, the Alessi family was looking for a change as well.  Having had the luxury of several factory rides since 2005, the Alessi brothers have yet to win a professional motocross or supercross championship. This is despite the “commitment to excellence” and very hard work that they are known for in regards to preparation and fitness.

“I was a fan of both Mike and Jeff Alessi long before I started this team,” said Genova. “Despite the gossip and talk, I have always had a soft spot for them, and when the opportunity came up, and we started looking at it, I was actually really excited about the opportunity to take a new direction for the team.”

“In 2004, we put Mike (Alessi) on the podium of the 450 class with a third place finish at Steel City. He was only in the 9th grade and it was on our own bike, it was a bike that we had basically put together for him,” said Tony Alessi, who went on to poke fun and talk about the “shackles” that a factory ride can bring.

When Genova took the mic back, he explained that the Alessi's  - the entire family - had a close knit and strong program “up in the desert” that really should work. But that over the years, many of the factory teams had essentially forced Tony and other parts of the program to take a back seat, which therefore caused fractures in the overall machine that is Alessi.

Love them or hate them, the entire Alessi clan is unique.  The boys are polite and well spoken. Father Tony is focused on achieving the best results possible. He sometimes works 20+ hours a day, and is focused on making sure no detail is overlooked on the way to the podium for his boys. Some people call him crazy, while others call him insanely focused.  Regardless of the personal take, he wants the best for his boys. You can’t take that away from the man.

So, for 2012, both the MotoConcepts and Alessi program are going in a different direction. Combined, they are doing whatever they need to win, and using whatever the best products are.

They are calling the bikes “MC 450” and “MC 250” (MC for MotoConcepts) instead of the standard RM-Z 450 or CR-F 250 designations that fans are accustomed to seeing [note: Mike and Jeff Alessi are riding Suzukis, the 250 riders are free to choose whatever brand they prefer]. Genvoa made it clear that the bikes are bought from local dealerships and the team is getting NO factory support, and in fact, they won’t even qualify for contingency in most cases. 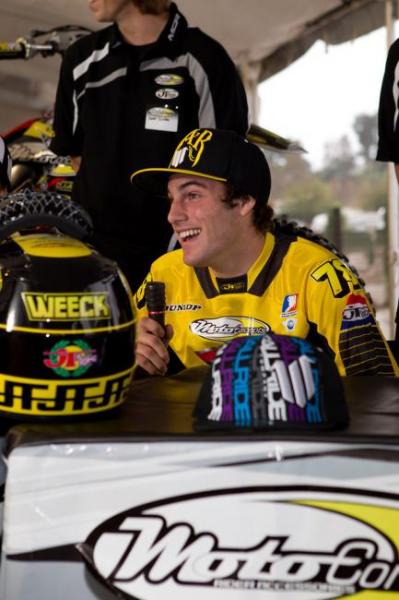 Weeck will be one of the 250 riders for MotoConcepts in 2012.
Photo: Carlos Aguirre

In the simplest of terms, Genova explained that the team’s role is handle everything at the races as well as getting to and from the races, while the Alessi's will handle things at home. R&D and testing will be a joint effort, led by Mike and Jeff, and working closely with many people who are part of Team Alessi.

In other MotoConcepts news, the entire team signed with the newly revived JT Racing clothing brand, which marks their first foray into modern racers since Jimmy Button last wore the gear back in the 1990’s.  Personally, I am glad to see it. As cool as it was to see legends like Chuck Sun and Broc Glover in the new JT ads, it’s certainly critical for a gear brand to employ modern day racers as well. The entire team will be wearing matching JT Gear, and their debut black and yellow gear looked very sharp.

In addition to Mike and Jeff Alessi, the team will field three more riders: Jake Canada, Vince Friese, and Tommy Weeck. Regions have not been determined for those guys yet, but it will be interesting to see what those guys can do aboard the MC 250.

Despite the craziness, gossip and talk that sometimes surrounds the Alessi clan, I will be pulling for Mike this year.  It is make or break time for the kid, and the situation is right back where it was in 2004 when he got that third at Steel City on a Terry Varner built Honda CR450. If he can stay healthy through supercross, he should be competitive once he hits the outdoors, just like he was back in 2009 when he was on a Suzuki, before he blew his knee out while leading the points. 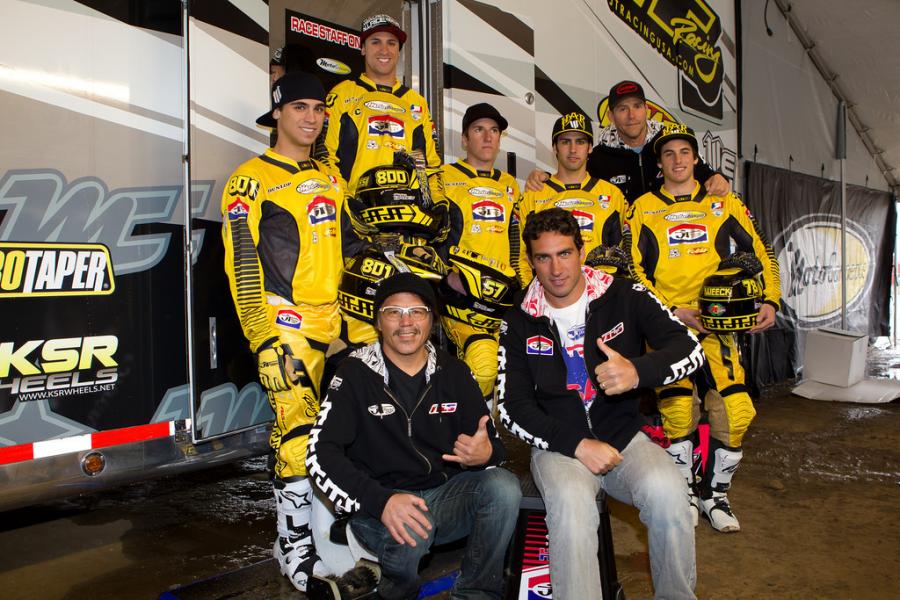 But one thing is for certain, this contrarian and underdog approach is rare in motocross.  It is a refreshing story of David versus Goliath in a sport where many of the teams and riders are following the same mold, doing things exactly the way others have done before.

As I got in my truck and drove out the muddy parking lot, I couldn’t help but think what a good story this team could be if they get the results, just by trying to do things a little differently. But only time will tell if they can make it happen.