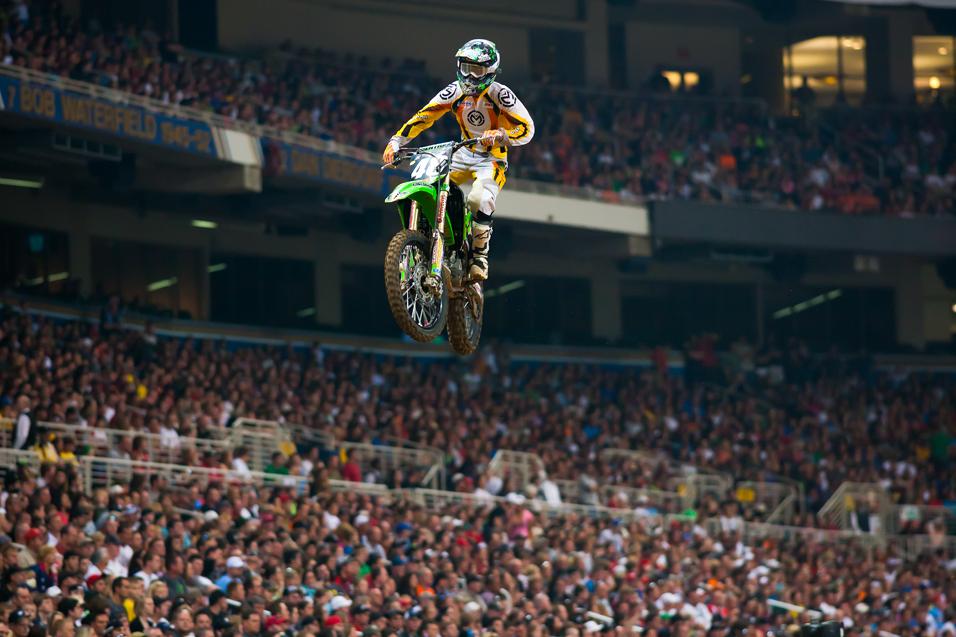 Advertisement | Advertise with Us
In the fictional comic book Batman, the character Two-Face adopts the persona of a crime boss, choosing to bring about good or evil based upon the outcome of a coin flip.  For Matt Lemoine, his 2011 season can be summed up close to that of Two-Face. On the bright side: a career year in supercross finishing sixth overall with three top-fives and finishing outside the top-ten just once. On the dark side: finishing twenty-fourth overall outdoors, with zero top-fives. But as you will find out it wasn’t up to a simple coin flip for Lemoine, as 2011 provided a variety of challenges that would have been hard for any rider to overcome. But as they say, “out of every negative comes a positive,” and for Lemoine that positive came in the form of an early contract that should have him back in the mix for a SX title come 2012.

Racer X Online: Let’s start with the positives from last year. You had a career year in supercross, finishing inside the top-five on three occasions. What do you think lead to that breakout year?
Matt Lemoine: You know, it’s hard to say. I love Kawasakis, I grew up racing Kawasakis my whole life, and I think the bike and setup had a lot to do with it. And pretty much just having fun racing, just going back to when you go to the races and you’re with your parents and you’re driving to the races. Pretty much just knowing I had to do good, and wanting to do good. This year we pretty much have the same deal going but it’s way bigger with HRT Racing. I really want to try and get on that podium this year a couple of times. 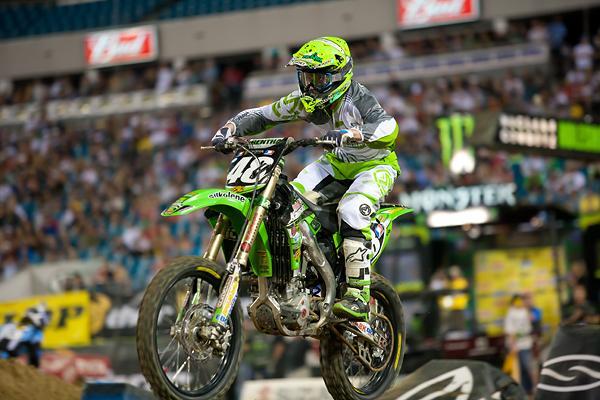 Lemoine had a career year in supercross, finishing inside the top-5 three times.
Photo: Andrew Fredrickson

That leads me into my next question. I saw that you have signed for next year, is it with the same team as last year or do you have a new deal?
No, it’s actually with Todd Hansen and it’s called HRT Racing. Todd bought a semi and everything and it is going to be a full-fledged Lites team. Todd helped with a bunch of stuff this year, as far as hotels and when we needed money that we didn’t have he would step in and do what he could. He has been in the sport kind of silently for the last few years helping teams out here and there. He never really got any publicity, but he stepped in and was like, “I’m tired of getting back burned on everything, so I’m just going to start my own team,” and luckily he hired me.

You are one of the earlier guys to sign. That has to be a big relief getting that done and being able to concentrate on getting to work.
Yeah, it’s really crazy too because I know a lot of my buddies that haven’t signed anything yet and everybody is clenching their fingers together hoping to get something done.  And what’s crazy is, in the motocross world the contracts start from October to October. So for people who aren’t signed, it’s a weird position to be in, because you have bills to pay that start in October and if you don’t have money coming in for this month it puts you in a tough position. Like you said, it’s a huge stress reviler, and it’s made me realize never to take anything for granted. So I’m definitely looking forward to this next year and having fun racing.

Do you know who your teammates will be for next season?
As of right now it will be Nick Myers and me. I would like to say others, but that is up to Todd and who ever else he wants to hire.

Do you know what coast you will be racing?
I’m not 100 percent sure, but I’m pretty sure it’s going to be East Coast.

You are out for the Monster Energy Cup this weekend. Was there any particular reason you decided against racing in Vegas?
I will definitely be on the couch for that race, because I raced the Pro Challenge this past weekend at Swan [Raceway Park] in Tyler, Texas, and there have been a couple of money races here over the last few weeks that I have been doing. I actually haven’t take any real time off whatsoever since outdoors, so this will be the first week that I get to relax and get off my feet for a little bit. 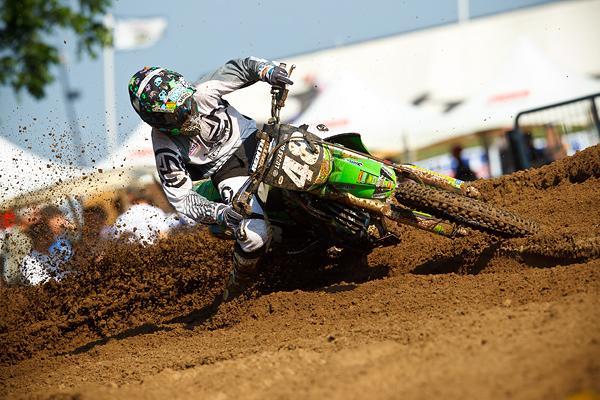 Lemoine will be back on Kawasakis next year under the HRT Racing Team.
Photo: Simon Cudby

Yeah, I’ve noticed you have been racing a lot during the “so called” off-season. Has that been a result of you wanting to get use to the new bike and set-up or just wanting to stay in race mode?
To be honest with you, it was to make money. The Pro Challenge is a $25,000 purse that had a bunch of guys there: Justin Bogle, Jimmy Albertson, Jeremy Martin, Lance Vincent, Nick Myers, Sean Hackley, the list goes on. They had 63 people in 450 Class racing. It was definitely good racing, and what’s crazy is we were doing 30-mintue motos. I raced my Lites bike in the 450 Class on Saturday and then I raced the Lites Class on Sunday. So it was like two full on nationals in one weekend. It was pretty intense, but it was fun. Now I’m just taking some time off, and trying to be stress free right now—as far as no headache with searching for a ride or anything, thank God for Tom Hansen putting this thing together!

How did the weekend go for you?
In the 450 Class I went 4-4 on the 250F on Saturday. In the Lites Class I went 2-1 for the overall, so it was a pretty good weekend. Actually the second moto, about halfway through, it started to pour down raining. It was fun but nerve racking at the same time. I had the lead and didn’t want to go down, especially because that track was so hard-packed and it was just slimy everywhere.

Let’s get back to the contract you signed. I know last year you had to drive to a lot of the races and had pay a lot of your expenses, is this new deal a full-time deal for both SX and MX, where you will have basically everything covered for the entire season?
Yeah, like I said it is going to be a full on team. I’m going to get to fly to the races, and just worry about showing up and racing a motorcycle instead of worrying about buying my hotel, buying my flight, dealing with tech and so on. It’s just going to be going back to what we had before and trying to make the best out of it this time and trying to win some races. 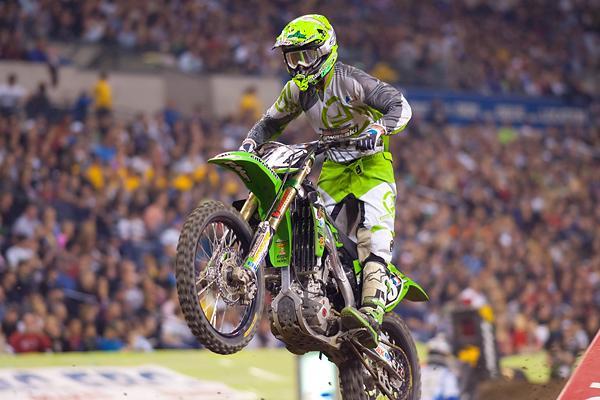 That has to be a big relief not having to worry about the smaller things anymore, and just getting back to worrying about racing and training.
Yeah, and a lot of people don’t realize it’s so hard to drive a van to the race, because first off I only get to practice one day a week, which is Tuesday, because Wednesday we have to get stuff ready to leave on Thursday. Then we drive all day Thursday, then on Friday we have to get there for tech and then we race on Saturday. Then we would leave after the race and drive home on Sunday and relax a little bit on Monday and then do it all over again. When you do that you have to worry about getting a hotel for the weekend, you have to worry about getting to the race, you have to worry about doing tech, you have to worry about trying to eat semi healthy, which is damn near impossible whenever your in a van and trying to eat fast food healthy. You have to cut back on your training, you have to cut back on your riding, you have to cut back on everything. So it’s like, how the heck are you supposed to compete with the guys that have everything handed to them whenever your doing everything you can but you’re basically not riding enough, you’re not eating right, your sleep is messed up from driving all night, so it’s a headache that is gone away. Hopefully this year we can step it up a bunch and win some races.

Obviously you didn’t have the outdoor season you wanted. The grind of driving to races every week, not being able to train or ride as much as you wanted, had to affect your results at some point.
Yeah it definitely did. But I have no excuses; I’m not trying to say that was the only factor. But in the 250 Class in general not being on a factory bike, like I had OEM suspension because we couldn’t afford to get new suspension, so little stuff like that outdoors makes a big difference. I think my bike was a little underpowered this year, but this next year we will have all the little bells and whistles we need, so there will be no excuses in that department.

In supercross the bike doesn’t take half the beating in does during outdoors. So when they’re putting in a new motor every moto and I’m running the same motor for four weeks, the bike is going to break, you just don’t know when. Outdoors is way tougher to do by yourself than supercross.

Any changes in your training this off-season to get you over the hump and become a consistent podium threat?
It’s pretty much the same plane, but like I said before I won’t have to drive and worry about all the other stuff too. I think it will be less stressful and just focusing more on racing and being in better shape. Basically doing everything I can to help better myself. So hopefully I can make that one step on the podium next year.