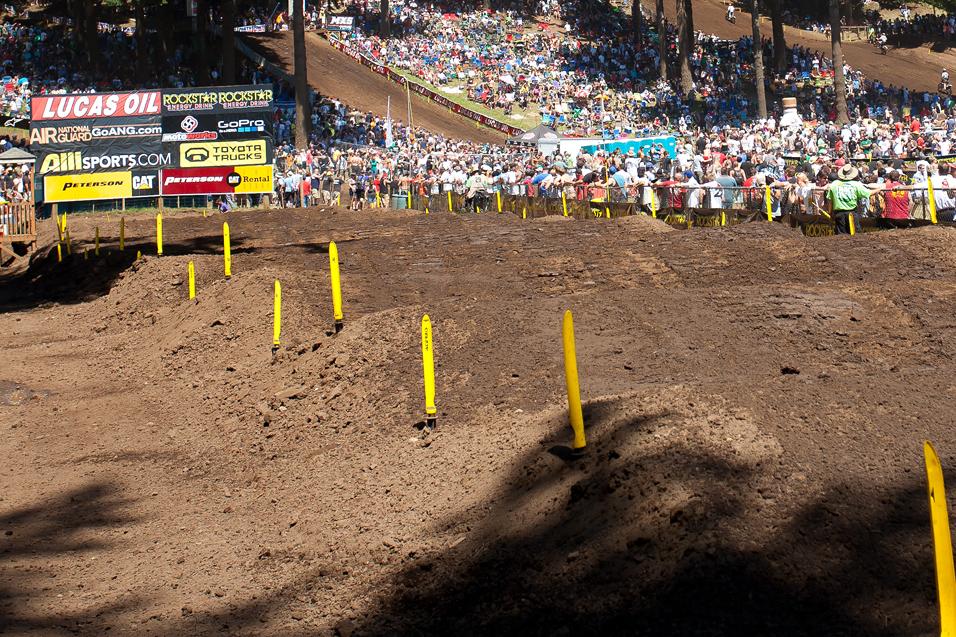 July 27, 2011 9:30am
by: Jason Weigandt
The term “help grow the sport” gets thrown around quite a bit, but no one’s job is as specific to that growth than Brandon Short, who runs the Media Relations program for the Lucas Oil AMA Pro Motocross Championships. Short works for Next Level Sports, a company that is contracted via series’ promoter MX Sports to handle media for the tour. In short, Brandon Short’s job is to get the local press—newspapers, TV stations, radio stations and the rest—to know the motocross races are coming to town, so they can let their audience know and drive more fans to the races. Here’s what Brandon does to prepare the local audience for each weekend’s race.

Racer X: Brandon, explain what you do here at the races.
Brandon Short: I work with the local newspapers and TV, trying to coordinate interviews with them and the riders, and hopefully getting them to come out to the race every weekend. But we also have media days scheduled on Thursdays with a different designated team each week. Those media days, that’s our big push to tell the local media “We’re here, this is what this sport is all about.” And we’ve had good support this year in most of the markets.

Also, I’m in charge of all the media credentials. I control the access to the race as far as media goes, industry and non-industry media, both, I check it out and see if it’s legitimate. I let them know and make sure everything is good to go, top to bottom, when it comes to media.

So when you’re pitching the local TV news on covering this, how basic does it get? Is it, literally, “Hi, we have some dirt bike riders riding on a dirt bike track?”
It has to be pretty basic. You really just want to go into it with the mindset that they have no idea what this sport is, so for lack of a better word, you try to dumb it down. Particularly for a TV station, the idea of motocross has a pretty natural appeal, because it’s dirt flying everywhere, it’s big air, it’s just so different than anything that usually rolls into town. You have to act like no one knows what you do, what your sport is, and you try to teach them. You have some markets where we have been around for awhile and they know what we do, you have others that don’t understand as much. Some markets are small, some are big. That’s the nature of the nationals.

Talk about these Thursday press days.
Yes we have press day every Thursday before the race with one designated team. Usually we base that around a local rider—like we had Suzuki in Millville because Dungey is from Minnesota, and we had Kawasaki here in Washougal because it’s Villopoto’s local race. But sometimes you just don’t have a local rider, not every track has one. It’s meant for factory teams and factory supported teams, but we encouraged local riders, privateers, to come out and be a part of it, too. Sometimes the media likes their stories the best, actually. The whole idea is to get the media interested before the race so they can create stories that may make someone want to come out to the event. 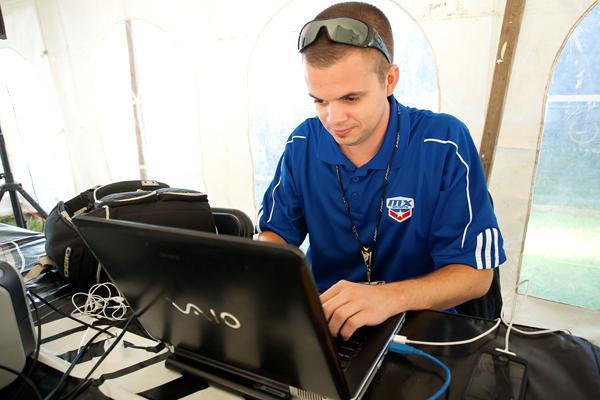 Short's (pictured above) job is to try and get local media to cover the sport of motocross.
Photo: Andrew Fredrickson

What’s the schedule on a media day?
Our approach this year has been to take the riders to the media. We’re so remote at some of these tracks, to tell someone to come an hour or so outside of their city to come and see us, it’s hard to justify that. Budds Creek is a perfect example. We pitched to the Washington, DC area, and worked with the Joe Gibbs team, because Joe Gibbs  obviously has a great name in that area. We pitched to Washington and Baltimore, and the Baltimore market was very receptive. So we drove an hour-and-a-half up to Baltimore to a TV station. The time frame on press day usually revolves around that. Our normal designated press day time is 1 – 3 p.m., and that includes media interaction, media meet and greet, and them some riding time so people can see what these guys do. But when we get something like we did in Baltimore, that took up a huge chunk of our morning, so we pushed everything back. We try to start out by 1 and be done by 3, because we want those TV stations to have time to go back and get their local nightly news broadcast complete.

That explains why you do this on Thursday.
Yeah, we want to give people an option as to what they’re going to do on a weekend. We will take what we can get, so if someone wants to do a story on a Friday, that’s okay, but we’d rather do it on Thursday. By the time Friday rolls around, most people have already decided what they’re going to do with their weekend. Thursday, you may have a better chance of convincing them to come to a race. You give them that extra day, hopefully it gets more people to come out.

And supercross has had Thursday press day since the sport started.
Yes, and we understand what a long week this makes for the teams. The Kawasaki rig had to get here from Millville, which is a long drive. So we understand the sacrifice, and that’s why we only ask for one weekend a year from each team. We also give them 30 minutes of riding each week, it’s a thank you for doing this, and a way that they can get some riding in since their typical week of training at home will be cut short.

I thought you did!
I went to college for psychology and was into a Master’s program for school counciling, but my boss, Tony Gardea, had an opportunity. I’ve known Tony for awhile, my dad was a sportswriter and Tony has done PR for motocross and supercross for a long time. So Tony had an opening just around the time I was working on my Master’s degree, and he gave me a shot. I came in during the summer of 2008, he showed me the ropes, and I’ve been here ever since. He did his best to show me the way, and over four seasons I’ve definitely figured out a lot of different things, what to do and what not to do. This is definitely not the type of job where you can learn every aspect in school, you have to learn it as you go, through experience. This is a unique sport, and you need to dial in a specific program for this sport, and hopefully you can put together a plan that really helps everything grow.