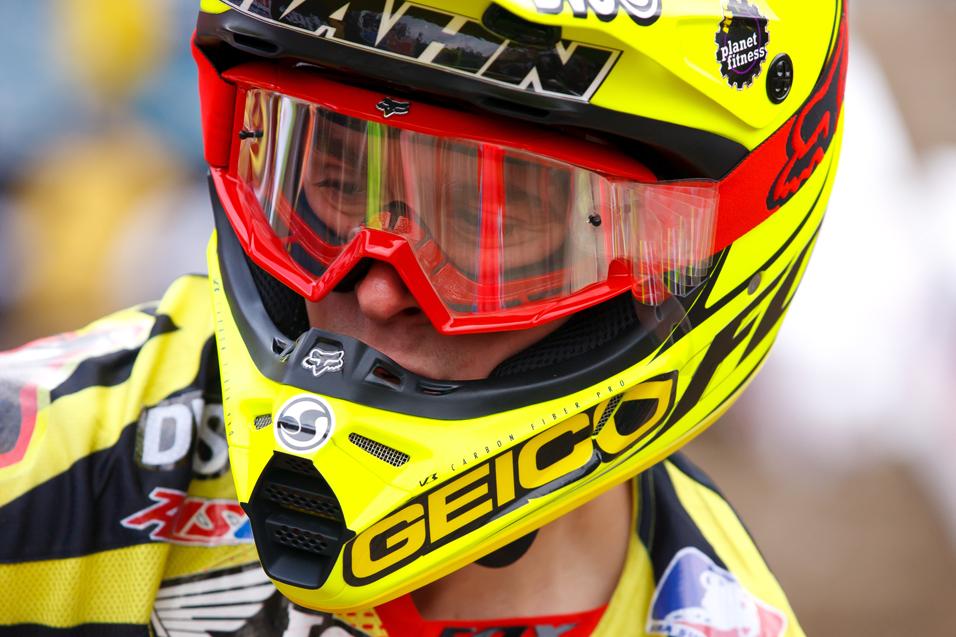 Going for the W Wil Hahn

When 2011 began, Wil Hahn was a genuine favorite to get wins and maybe a championship in the West Region AMA Supercross Lites tour. But he crashed and broke his back in practice for round one, and has been out of action ever since. Wil finally makes his racing debut for GEICO Powersports Honda this weekend at RedBud. Is he ready to go for the W yet? Maybe not, but it's the first step in a process to finally get some. We rang him up, and he treated us to a hilarious interview like he always does.

Racer X: Hey, you ready for this interview?
Wil Hahn: Yeah but I have a mouth full of nuts right now.

[Laughs] Whoa! You may want to clarify that.
Cashews! Yeah should have been more specific on that.

So anyway I think we’ve broken a record here by posting an interview with your brother this morning and with you right now. First ever double brother interviews in one day.
Alright that sounds good.

But. His interview came first. Does that mean anything to you?
No, he came into the world first, so that’s cool.

Yes, but, I don’t know how to say this properly, but, he’s been crushing you in the results column this year. You haven’t done anything, really.
Yeah unfortunately I just haven’t been around to capitalize and get any results lately. It’s been a tough year to get those points. Any of them. 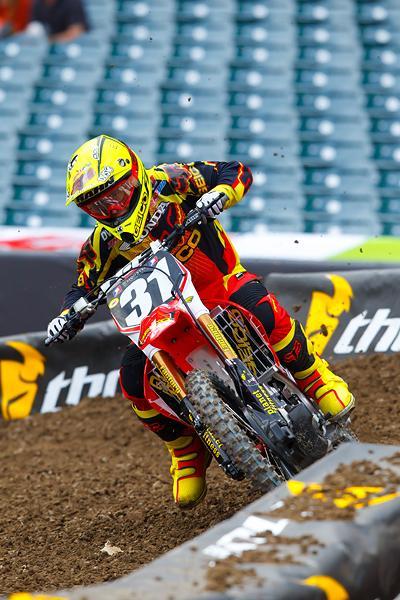 Hahn will make his 2011 debut after a series of injuries.
Photo: Simon Cudby

Okay remind everyone here as to what went down.
So it all started at Anaheim 1, everyone pretty much saw that. Ended up going down in first practice on my own and taking someone down with me. Just a stupid mistake, the excitement of round one got the best of me. I almost got to the point where I felt so good on the bike that I felt invincible. Second practice, it was a small crash, a stupid crash, I just tucked the front and it shot me over the bars. I landed on my head just right, and I ended up fracturing my T5 vertebrae in my back. I did my therapy with Doctor G. I got released March 1, I drove back from California to Texas so I could start riding on my own. This way there would be no one around, no ego, and I would not be getting pushed. The second day on the bike, everything was going great, but I just ended up having a small mistake that put me down pretty good. I never saw it coming, and I don’t remember the crash. I ended up knocking myself out and breaking my shoulder blade up real high, breaking a rib and puncturing a lung. I was in a high-speed section and I was just taking it easy. I wasn’t pushing myself or going wide open. I don’t regret that one at all. Anaheim, I can look back and wish I could have maybe calmed down a bit. I had a pretty scary crash there, and next thing I know I’m back in the hospital, I get a life flight from Decatur to Fort Worth. It was scary again.

At first when I was in the hospital in Ft. Worth they made it sound pretty minor. I thought I’d be back by the beginning of outdoors, no worries. Things escalated, I went to Doctor G and he explained how serious this was. To break my shoulder blade that high, and to break your number three rib, the amount of impact that would take to do that, it was pretty big. So it ended up keeping me out two and a half months.

You actually only started riding right around Freestone, right?
Yeah the Friday before Freestone.

Okay so you’ve gotten some time in. What makes you make the decision to go race this weekend at Red Bud?
Obviously I ride with a lot of good riders, my brother, Kyle Cunningham and Matt Lemoine. I kind of base myself off of that. I feel prepared and I’m going into the weekend with an open mind so I can learn, but I’m ready to put my bike up front. I’ve put in a lot of work. All that downtime gives you a renewed outlook. Training and riding is not hard right now. You come to realize how much you take it for granted.

You finished second in West Lites points in 2010, and Jake Weimer and Trey Canard were both moving to the 450s. It had to be tough to watch that West Lites series this year, and see how many riders won races.
Yes and no. I mean I was happy for a lot of the people that won, and happy for our team, we came up short for the title but we came darned close. But at the same time, I felt like
I was the guy. It’s hard to judge a series that you’re not riding in, you never know, maybe I would have been out of it. But I would like to think I would have been in the series contending for race wins and that championship. I did go to a lot of the rounds in person, but it was definitely tough to watch it all. At the end of the day, that’s life and I’ll be back next year.

What’s your situation for next year? Multi-year deal?
Yeah, I do have a second year, so I don’t have the added pressure to get resigned right now. But I want to do well for them, and also for next year, I want to know I can contend in the outdoors so I have something positive over that long break before supercross. 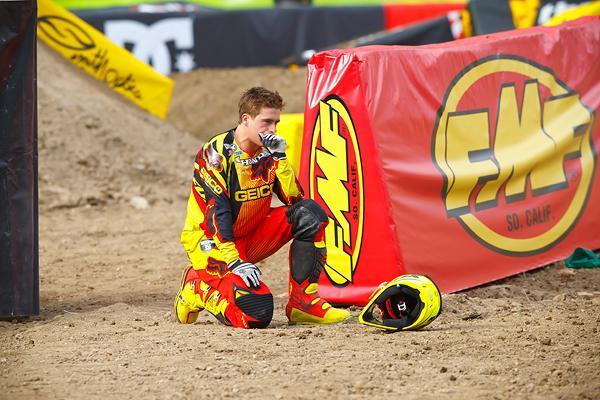 Hahn suffered a broken back at A1.
Photo: Simon Cudby

So what do we see this weekend?
Yeah I feel like I’m going to come in swinging. I know I haven’t been out there and there are a lot of fast guys. But I think I’m going to surprise a lot of people. I know it has been a long time since I raced, but I did a lot of homework. For me it’s like going to Hangtown right now.

With the shoulder injury, I’m assuming you have just been going to Golds Gym and just lifting the heaviest stuff you can find. Just high weight, low reps. That’s the way you do it, right?
Well, actually that and also getting a membership at Curves for those days where I feel wimpy [Laughs}

[Laughs] Okay I see.
Actually, it’s all about Planet Fitness. C’mon Weege you know that. Planet Fitness is where I go to pump my iron. What I do is, basically, once I got healthy enough where the bone wouldn’t just snap, I just focused on maxing out. Just as much weight as you could put on the bar. I would just do that, as much weight as we could get on that bar, and then once I got to the point where I could rep out 10 of those, I said “Okay boys, it’s time to go to RedBud.”

Wow I had no idea!
Actually this Monday was the first time I got in 10 reps. It was only 450 pounds. But the problem is, when you’re lifting that kind of weight, is that I weigh 240 pounds right now. So ever since Monday I’ve been fasting and not taking in any fluids. The goal is to get my weight back down to 140 by the weekend. By Saturday I should be looking about back to normal but my arms will have a ridiculous amount of strength in them.

[Laughs] Okay you want to thank your team for backing you up during all of this?
Yeah they have been more understanding about it than anyone could have been. They couldn’t have handled it any better than they did. They are constantly calling me and checking in on me, they treated my like I was a guy winning all these races for them and really I wasn’t even out there. I don’t know what more you could ask for from a team, and also my family. The team is like my family, but I also had my legit family here the whole time. I can’t say enough about the people who have been there for me through these injuries.