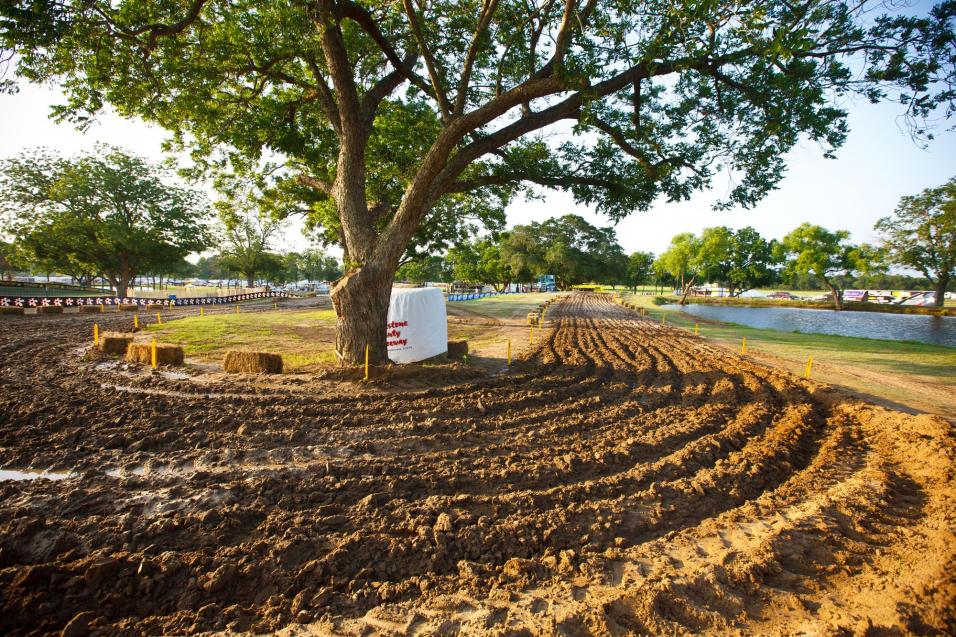 The Rockstar Energy Drink Freestone National presented the typical Freestone layout, which is basically flat, but features a few good jumps, and deep, sandy soil. Temperatures reached the 90s, and the wind was whipping through at over 30 MPH. Extra water had to be laid down so the track wouldn’t get dusty under the sun and wind, so early in the practice sessions the track was so deep and watered that even the 450 bikes were having a tough time pulling. Things dried out later. This left the track a little one-lined early on as riders went for the main, dried out racing line, but by moto two the track had developed quite a few different lines for passing.

Bike problems were the order of the day at Freestone—as evidenced, obviously, by Ryan Dungey’s Rockstar Makita Suzuki giving up with two laps to go while leading the final 450 moto. Dungey and his team are not alone, though, in suffering mechanical problems. Honda’s Kevin Windham couldn’t get to the finish in the first moto, and Chad Reed admitted he had a similar problem to Windham, just not as severe. Reed said they took extra precautions in the second moto and the problem didn’t return. Motoconcepts Yamaha’s Tommy Hahn broke part of his gas tank in moto two. Red Bull KTM’s Andrew Short, of course, had bike problems in both motos last week at Hangtown. Overall, it has been a strange year of mechanical troubles for just about every brand.

Texas was equally hard on bodies, too, with the heat and humidity really taking a toll. Kyle Cunningham had to visit the Asterisk medic unit between motos despite finishing a strong third in moto one, but he returned in moto two to collect a podium finish overall.

How tough is racing at Freestone? WMX Winner Ashley Fiolek has thrown up during the motos here the last two years, and said, "Basically my first goal today was to just not throw up!" And she managed to avoid doing so on her way to winning the overall with 1-2 scores. Second-place overall finisher Tarah Gieger was not as lucky, as she lost it during her first moto. She soldiered on, though, to finish the moto in third.

The worst luck of the day, if not the year, is in the possession of Red Bull KTM’s Marvin Musquin. He was side-by-side with Justin Barcia battling for the lead on the first lap of moto one when Barcia crashed, and his GEICO Honda flipped right into Musquin. The Frenchman broke his thumb and also injured his hand in the crash, and will now be out for some time. And remember, the 2009 and 2010 MX2 World Champion missed all of Monster Energy Supercross with a torn ACL!

Sub-par day for Ryan Villopoto based on his usual high standards, but he did hang on for a podium finish overall in the 450s. In the first moto, he got a bad jump off the gate. In the second, his start was better, but he went off the track early and found himself back in the pack again. While coming through, he crashed and ended up fifth. “I’d like to win motos for sure, right now,” said Villopoto. “But we’re not quite there yet. I think the speed is there, but we’ll have to do a little bit of searching. We did some testing on Thursday, and found definitely some better settings. We’re still going to work on some things, we’re not quite there yet, there are areas where we can be better. But most of it is on me. I’m a little off right now.” 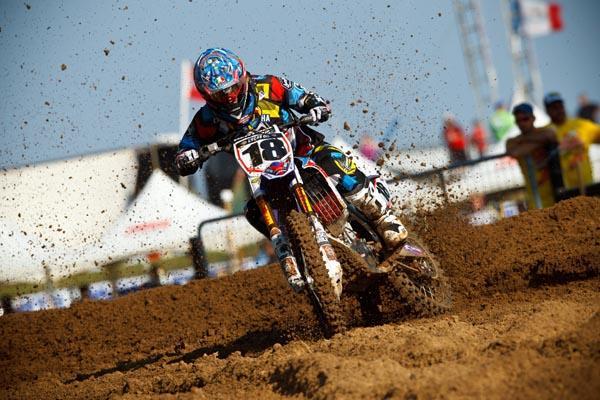 Davi Millsaps took second in the 450 class with 4-2 finishes, easily his best ride of the year. Millsaps has been working through the complications of a crash last June at Budds Creek that damaged a kidney. “Twelve different doctors told me I should stop riding dirt bikes after I lost part of my kidney,” said Millsaps. “A lot of people were saying I would never ride again. But I found one doctor who would not tell me that, because he used to ride himself. That doctor wrote me a release. He’s in California and he’s really good—a specialist in that stuff. He told me to take the right amount of time off, and that it would be two or two and a half years before my right kidney completely learns to compensate for the left one. After that I’ll feel a lot better.”

Millsaps was making up huge time jumping over the big wall jump before the sand whoops. His coach, former AMA MX National winner Ezra Lusk, told Millsaps to try it because he knew Davi would do it no problem during practice during the week. “It kept my momentum up going through the whole section, and saved me a lot of energy. I was laughing, because the first time I jumped it, no one was over there. No fans at all. But each lap more people started coming over, and then after a few laps there were a lot of people watching,” explained Millsaps.

Millsaps had a new Muscle Milk/Toyota JGR teammate for the weekend in Les Smith, who is filling in for Justin Brayton, who injured his ankle at the Las Vegas Supercross. Smith rode a 250 in supercross for Jimmy Weinert Racing, but got a good deal to ride Kawasakis outdoors with Chaplain Kawasaki. But that deal fell through, leaving Smith without a ride, and the Weinert team had already filled his spot (the Weinert team did try to scramble and get a bike for Smith to race at Hangtown, anyway, though). So Smith was basically left with nothing, and he finally bought a bike with his own money just so he could practice and stay sharp in case an offer came. On Monday night, the Gibbs team called, and after a few days of testing, he was off to Texas. His 11-14 moto scores were solid. 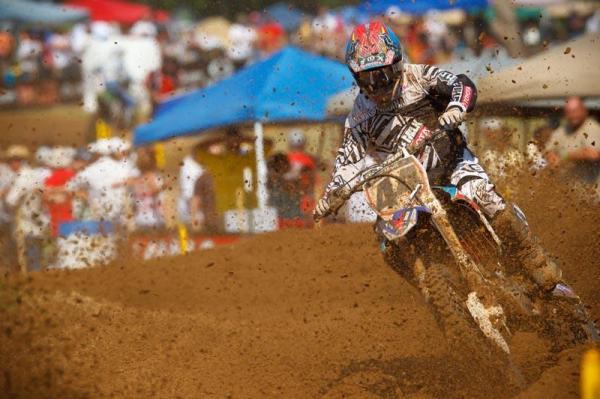 DNA Shred Stix Star Racing Yamaha’s Ryan Sipes was happy to be back racing after he left Hangtown thinking he had broken his wrist in a first turn crash. But the pain was only caused by some scar tissue he had broken up, and Sipes was ready to race in Texas. Unfortunately, in moto one, he hit a hole and jammed his back, knocking him out of racing for the day, anyway.

GEICO Honda is down quite a few riders. Wil Hahn and Blake Wharton are out with shoulder injuries, and Jimmy Decotis dislocated his elbow at the Seattle supercross. Hahn and Wharton both live in Texas, so both attended the race to cheer on their teammates—Hahn also handled a few on-camera segments for the TV coverage on SPEED and FUEL TV.

The GEICO team picked up a replacement rider in Lance Vincent, a pro rookie who normally rides Hondas for the Motoinnovations/EBR Performance/Ankle Savers/Team Sakai Racing privateer team. Vincent got the call from the GEICO team on Thursday. Vincent was running in the top ten late in the first 250 moto before a crash bumped him to 16. He fought back to a 10th in moto two. 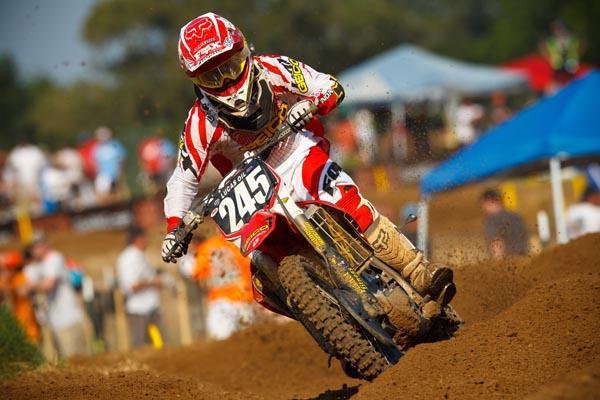 And here is Lance Vincent on his new ride.
Simon Cudby photo

The Rockstar Suzuki team was also down a rider in Texas, as Hunter Hewitt, the replacement rider for the injured Ryan Morias, crashed a suffered a concussion at Hangtown. He hopes to be back for High Point.

A pair of Swedish riders, Calle Aspegren and Fredrik Noren, finished in the top 20 overall in the 450 class. Aspegren went 17-17 for 18th overall and Noren 19-19 for 20th.
Christophe Pourcel looked fast in the first 450 moto while running second early, but he is still fighting the forks on his bike and decided to pull off. He tried a different triple clamp offset for moto two, but pulled off when his shock reportedly broke. 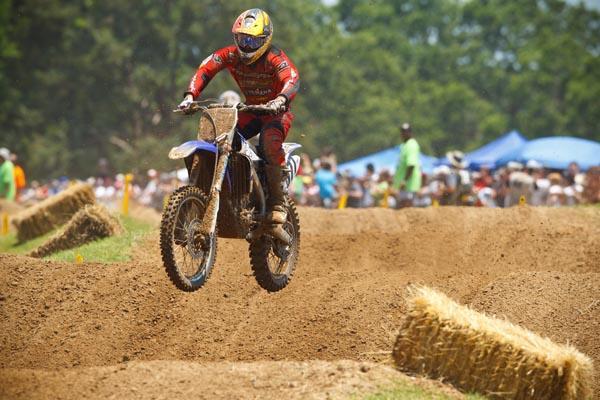 We haven't seen what Christophe Pourcel can really do yet.
Simon Cudby photo