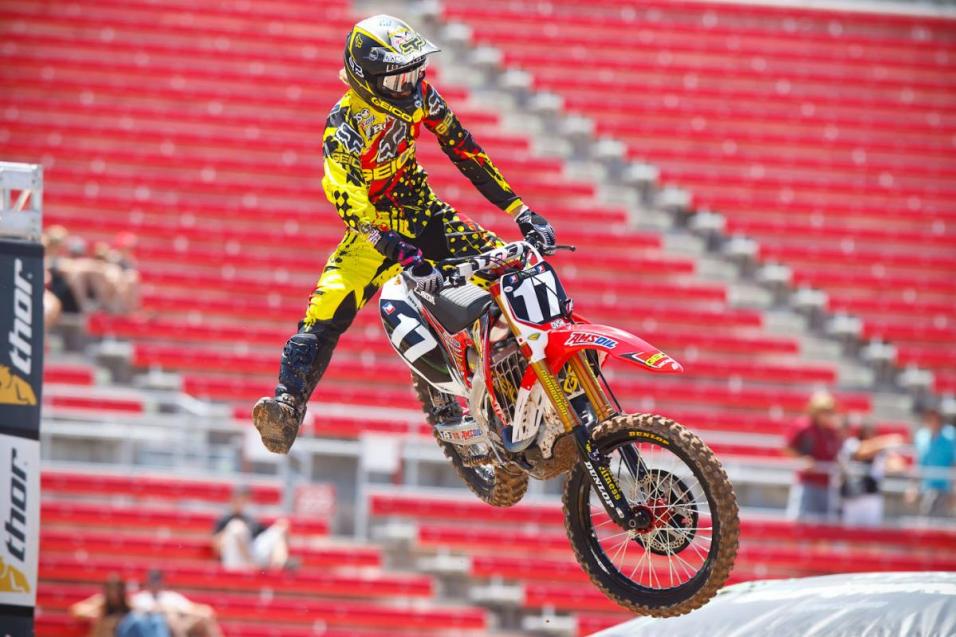 Good afternoon and welcome to the final round of the 2011 supercross season. Temperatures here in Las Vegas are in the low 90s, but should taper off to the mid 80s by the time the night show begins. The warm temperatures are drying the track out quickly, and the track crew has been busy working water into the dirt in order to prevent a total dust bowl.

The first turn is a 90-degree left-hander that leads directly into Monster Alley and the longest straightaway on the circuit. There is also a sand section that consists of two small jumps with a larger jump in the middle. So far all of the guys are doubling and singling out, although during track walk, several riders were discussing the possibility of tripling it by wheel tapping the middle jump. The whoops are monstrous again, but for the most part, they are the same height and are equally spaced. Thanks mainly to Monster Alley, which exits the stadium before looping back in, the track is pretty long, and lap times are substantially longer than what we’ve seen at the other venues.

When the western regional Lites riders came out for the second time, Tomac tried out a new line in a section where everyone else was double-doubling. Tomac intentionally overshot the landing, cased into the face of the second double and bounced over the landing. The line seemed to work for him, and he held the fastest lap for the majority of the session, although Tickle and Roczen briefly topped the board as well. But just as he did in the first practice, Cunningham would log the fastest time, a 1:04.738, at the end of the session. Tomac followed with a 1:04.229, then Tickle (1:05.077), Seely (1:05.101), Martin Davalos (1:05.219), and Roczen (1:05.268).

So how about Windham, nailing the fastest lap of all? In a night where everyone is looking for potential spoilers, Kevin could be the one.

We've got a jam packed night tonight, with two Lites mains (each crowning champions), the East West Shootout and the SX Class finale. Make to stay tuned to www.racerxonline.com and follow us on Twitter (@racerxonline) to catch all of the action from the finale in Las Vegas.