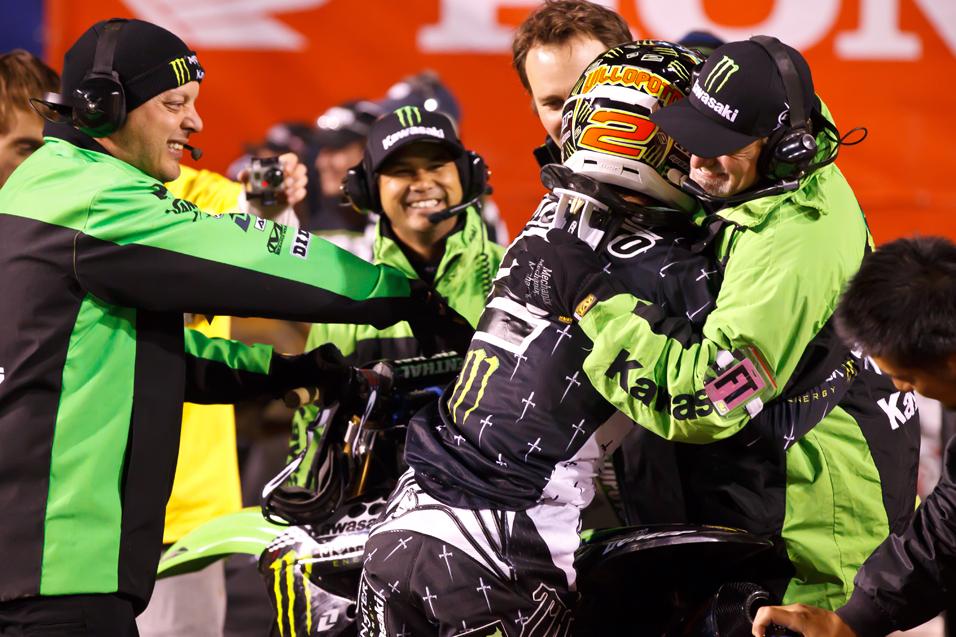 May 2, 2011 11:00am
by: Jason Weigandt
Rice-eccles Stadium Salt Lake City, UT Salt Lake City Monster Energy AMA Supercross Championship
The 17-race Monster Energy Supercross Championship consists of 340 laps, but none may have been more critical than the final one on Saturday night in Salt Lake City, Utah. In the waning moments of the series, the fantastic season-long championship battle was finally starting to eliminate contenders, and at that point, only two riders were left with a shot to make their own destiny. 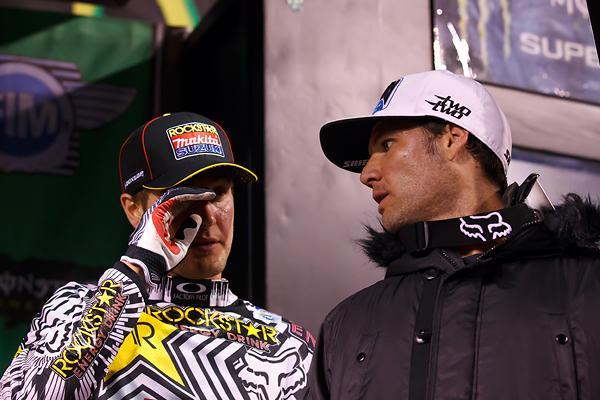 The Big Five gang of contenders whittled to four when Trey Canard broke his leg a few weeks ago. Four riders still had a great shot at the title by the time the series reached Salt Lake, but the race there furthered the process of elimination. James Stewart crashed once and then again, perhaps finally completely eliminating him from title contention. And Ryan Dungey rode well, but wasn’t quite quick enough to keep pace with the leaders in a race where he really, really needed a win.

As the white flag flew, we were down to just two: Ryan Villopoto and Chad Reed. Just six points separated them in the series, and just 1.3 seconds separated them on the track. Villopoto led, and Reed knew he had to find a way around. If Reed finished second, he would head to the finale down nine points, which would mean Villopoto would only need to finish in the top six at the finale to clinch the title even if Reed won the race. But if Reed won in Salt Lake, he would be down just three points heading into the final, and then he could win the title by winning the Vegas race and watching Villopoto finish third or worse. 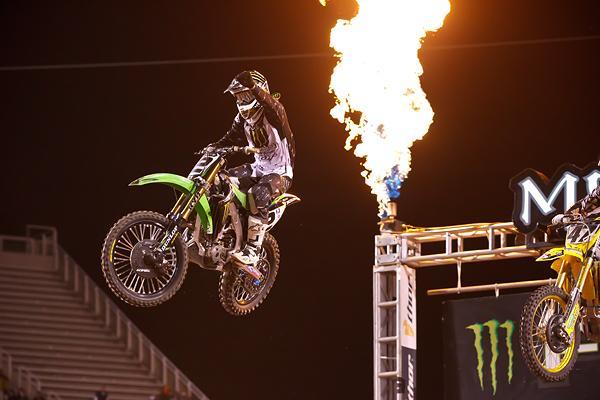 So 1.3 seconds stood between them with a lap to go, an entire season, possibly, in the balance during that final 43-second lap. Reed pushed hard. Over the final few laps, he had finally figured out the best line through the whoop section, and started blitzing his Honda across the top, while Villopoto stuck with the safer blitz-triple-triple jump out technique. Packs of lapped riders stood in their way, too. Under pressure, Villopoto hit his marks, didn’t override any of the sections and maintained his pace. Reed lined up the whoops and ripped off one last gasp attack. He blitzed, Villopoto jumped. Reed closed in slightly, but not enough. Villopoto got to the last turn before Reed could get to the inside and try to make a move. He then worked his way past the final lapped rider, and launched toward the finish with victory in hand. He won by .95 seconds.

In a series this close, that final lap, that final margin if victory of less than one second, may ultimately decide the championship.