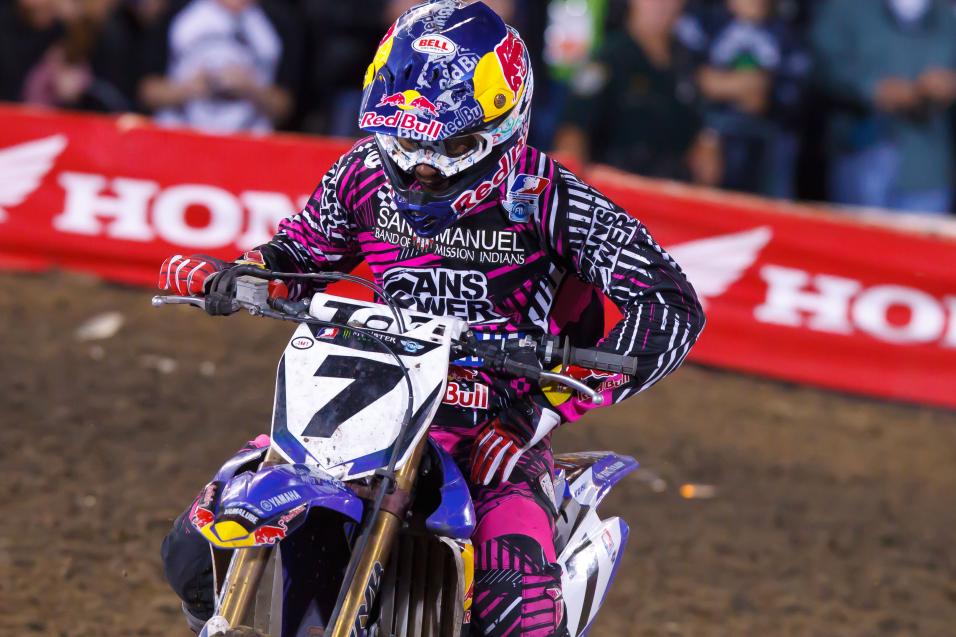 
While watching Saturday's Daytona Supercross with my family, we, along with the rest of the world, watched as Stewart took a rough digger. While I am not a Stewart fan, I respect his abilities and talent and would never want a racer to get hurt whether I like them or not. My question is: It was very obvious his bell was rung as he could barely stand up, let alone get a leg over his twisted up bike. When do the higher powers step in and keep him from going back onto the track and potentially injuring himself, or other riders, worse?

I’m not sure why there is so much buzz about this. This is professional athletics and motocross is one of the most brutal sports around. Riders have been crashing and getting up to finish races since the very first snaggle-toothed Brit with a leather helmet and chaps got his rigid-framed jalopy sideways in a scrambles race and got flicked off like a stubborn booger. Why is this such a big deal? James crashed hard and he was dazed but he jumped right up and started looking for his bike. If a guy is concussed or seriously injured, they usually find a nice, soft tuff block on the edge of the track and have a seat until they can pull it together. James ran to his bike. When he got there, Eddie from Asterisk’s crew asked if he was okay. James didn’t answer; he just began gathering his bike. He had to pull it off the side of a jump and didn’t notice the fender pointing up, causing him to fall when he swung his leg over. At that point Eddie asked him again if he was okay. James said, “Yeah, I’m fine.” So, they stepped back and let him start his bike and ride off. James pulled back onto the track with nobody around him and the Asterisk crew all kept an eye on him for the next several laps. He immediately began jumping the obstacles again and riding without doing anything erratic. In the end, James put together good laps for the rest of the race and salvaged some points. The right decision was made by Asterisk and the officiating staff to let James continue (realize that it isn’t Asterisk’s job, per se, to pull someone off the track if they think they crashed too hard). If James had ridden off into the high bank of turn one on the speedway or been weaving all over the track I’m sure that the AMA and FIM officials would have pulled him in. There have been questionable moments in this sport’s history where riders rejoined the race after hitting their heads. Josh Hansen’s ride at Anaheim 2 comes to mind, though he made that one work for him. But in my opinion the Daytona incident with James was handled properly. Let it go.

I have noticed that many of the organized groups that participate in the racing each week refer to their respective group as: Team (fill in the blank); such as: Team Honda, or Team Suzuki, etcetera.... Recently, I have noticed that some of the riders who happen to share the same team are now being tagged as "Stable mates.” Does this new label indicate a deeper/higher level of connection between the riders sharing the same team? Do these "Stable mates" actually live, eat, sleep and eventually consummate this relationship in a stable?

I learn something new every time I watch the broadcast as well. I never referred to any of my former teammates as “stable mates” but maybe that’s what kids are calling it these days. Or, maybe the fellas in the booth need to rethink some of their descriptive terms. Stable mates? I’ll tell you what, unless I’m lining up for the Kentucky Derby, I don’t want to refer to anyone as my stable mate. And while we’re airing our discontent, let me just say that if I have to hear about that track being “alive” one more time I’m going to tie all my shoelaces together and hang myself. We get it: the track is made of soft soil and it changes every lap. Deep ruts reach up and grab you, blah, blah, blah. It’s a scary track and it lives and breathes. Oooooooohhh, watch out. Moving on.

“Stable mates” is only slightly better than calling teammates your “partners” and I hope that neither of these catches on in the booth.

I really hesitate to bash TV coverage of SX. When I came up all we had was Motoworld and Cycle News so I am very appreciative that we have such a good TV package now.  But every week one segment continues to strike me as legitimately stupid: the “Keys to the Race.”  When I see introspective tips like “Get a good start,” “finish strong” or “ be patient” it makes me want to bang my head into something. Really? Not choking on lap ten is a key to winning? Getting a good start can lead to a better finish? Riding hard is important? Awesome, thanks. Never would have guessed.

Can you please use your magical-powers-for-good to make the Keys to the Race go away, or better still, replace them with some actual technique or track-related keys? I think even a casual fan would appreciate a little more of the “how” behind what the riders are doing out there than these vague and pointless “keys.”

We should all be quick to realize how good we have it these days. I hear old-timers talking about how the only motocross they got to see on the color set was the USGP at Carlsbad and it was aired months after the event took place. We have come a long, long ways in terms of coverage in this sport and we should not take that for granted. That said, the Keys to the Race are lamer than a commentator referring to members of the same team as “Stable mates.” Sorry, still not over that one. I don’t need to hear RC and Fro give a dissertation on string theory, but it would sure seem to me that with as many titles as they have between them they could come up with something a little more profound than “Ride fast” and “Dig Deep,” or whatever the totally awesome “Keys” were this week. At one point I almost laughed out loud because it sounded like something Derek Zoolander would have said after explaining that there is more to life than being really, really ridiculously good-looking. Both of these guys have won at Daytona. So, how about telling us what you did to prepare and the mindset you had coming into and during the race? We all know it’s important to get a good start. My slow neighbor kid who munched all the lead-based paint off his crib like a beaver when he was a kid knows that you need to get a good start. Tell us all something we might not know. Mark, I wish I had more pull and I could make something change. Sadly, you might be stuck with Keys, so continue to breathe air in and out all day long or keep going until the officials give you the checkered flag for a couple more months. Sorry.