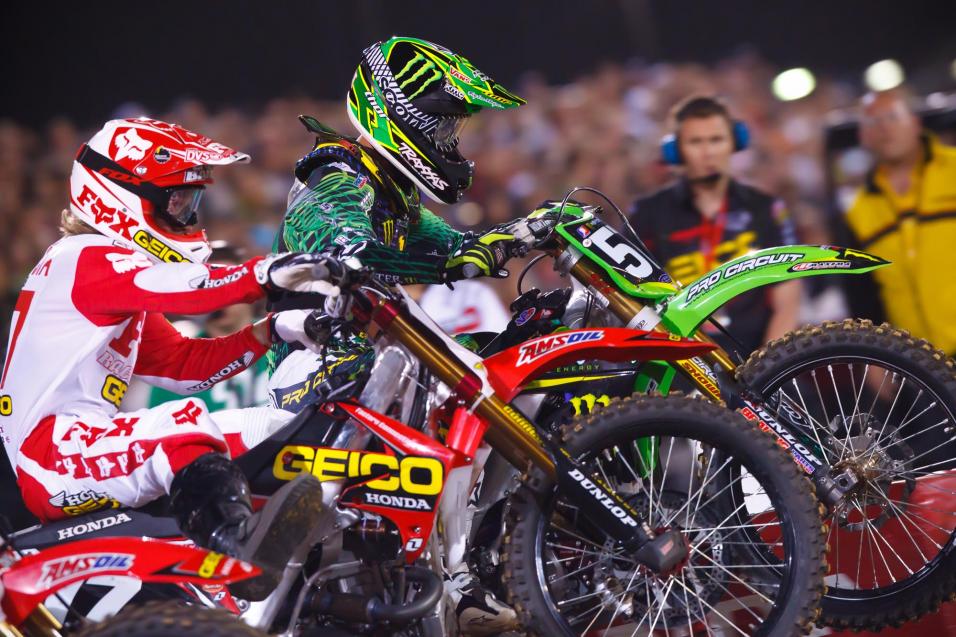 10 Things For in Indy

10. Hard and fast: Back in the day, races in places like Atlanta and Indianapolis were known for their soft, wet, rutted soil conditions. That’s in the past now, as the track crew has figured out how to harden these tracks up. Less ruts means safer jumps and whoops, certainly a good thing, but teams are having to revise their setups to maintain traction—especially to avoid the front-end washouts that have become so common this season. Stiff forks are awesome for jumps and whoops, but not so good for turning on slick stuff. We’ll see who gets it right.

9. Seely Stars: Cole Seely gets a shot on Josh Grant's Honda CRF450R this weekend. But the replacement rider standars are high after Trey Canard pulled a bunch of podiums out last year.

8. Stewart Streak: With a big points deficit to overcome through the second half of the season, James Stewart will have to go back to the old win-or-crash mantra that got him to a championship in 2009.  Or was he already there? Either way, a healthy Bubba is always a threat. We just hope he can actually stay healthy after a few tough crashes of late.

7. Back to Supercross: After the hybrid Moto/Super track at Daytona, we’re back into a dome this weekend. The last time we raced on one of these, Atlanta presented one of the wildest, craziest, awesomest races in awhile. Here we go again!

6. The Little 5: Lots of hype for the big names on 450s, but we now have five riders in the Lites class who could win this weekend and not shock anyone--Barica, Baggett, Wharton, Sipes and Wilson. It’s not often that we can we make a list with ten realistic potential winners on a given night.

5. Will Dungey Win? Technically, 2003 AMA SX Champion Ricky Carmichael went winless in 2004, but only because he skipped the entire season with a torn ACL. Heck, James Stewart managed to get wins in 2008 and 2010, and he barely even raced at all. The last defending champ to get deep into the series without a win was Jeff Emig over a dozen years ago. The Dunge is close—to both winning or joining the Fro with this dubious distinction.

4. Short Podium: Can Andrew finally break the dreaded KTM podium curse? The marque now has a bunch of fourth-place finishes in its history (including back-to-back fourths in 1991 courtesy of current Monster Energy Kawasaki Team Manager Mike Fisher), and now Shorty is on that list, too. One of these weekends could be the weekend.

3. Canard Bounce Back: Trey Canard is now the living, breathing definition of rookie mistakes. And unless you’re Jeremy McGrath or Ryan Dungey, they’re going to happen, so no shame there. The good news is, none of his recent crashes have resulted in injuries, so there’s nothing to stop the 41 from going for the number one spot again. 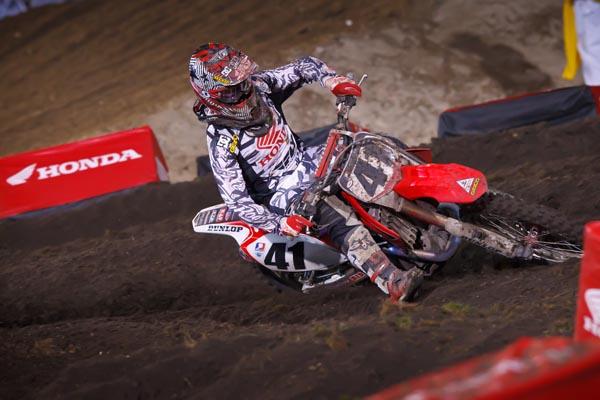 2. RV’s Strategy: While 23-points is a nice lead compared to where it was two weeks ago, Ryan Villopoto knows it’s not quite big enough to cruise to a title. Especially in a field this deep, where backing off the pace means backing off of the podium. So, the full field is still here and still going to race hard, which means anything can happen.

1. More Cheers: Atlanta has grown to become a key stop for this tour over the last decade, but Indy isn’t far behind. The crowds have been on the rise, and the big new Lucas Oil Stadium only makes this race better. It’s going to be loud inside this dome on Saturday—grab a seat if you can.