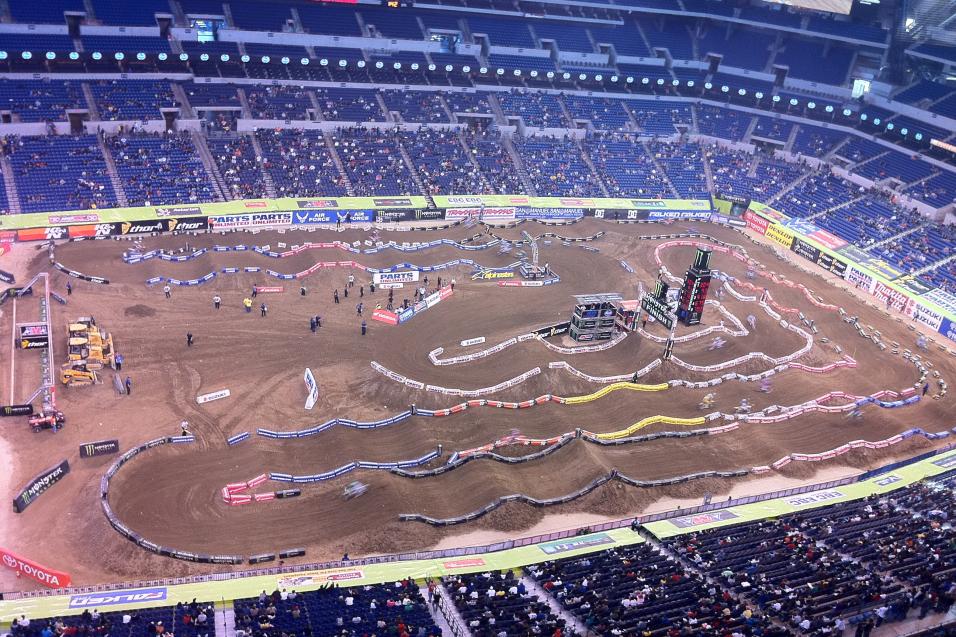 After going outdoors on the big track at Daytona, Monster Energy Supercross returns to the domes with tonight's round at "The Luke," Lucas Oil Stadium in Indianapolis.

So we're back to the traditional football stadium layout, with a long start straight up the center of the floor, and three big 180 bowl berms to offer up some block passing. The whoops are deep and come out of one of those 180s, so riders will have to make a tough decision coming out of the corner. You can rail all the way around the berm and carry as much speed as possible coming in, but eventually that line through the whoops will probably break down, and riders will have to cut down on the berm to protect the inside and get into a new line.

The triples are steep, they're really throwing the bikes up high, and a few of the guys hesitated on them during the free practice session. But the toughest combinations will come through the rhythm lanes. Right after the start comes three jumps, two tables and a single. No one has figured out the best combo yet. It's possible to double, then jump on to the first table, then jump off onto the next table, then jump off of that over the single. But the gap between those tables is very large, so it will be hard to consistency go on-off-on-off there. Sound complicated? It is.

That's a lot happening here, but it may not materialize. Riders may come up with the right combos and leave us with another tight track with everyone running the same rhythms. But we've seen soem exciting racing on those tracks--maybe tonight's race will be one of those, too.