Advertisement | Advertise with Us
Angel Stadium Anaheim, CA Anaheim 2 (A2) Monster Energy AMA Supercross Championship
For the only rider in the pits that can say he won the first professional race he ever competed in, patience could be hard to come by for Eli Tomac. But he’s still a rookie to supercross, still a teenager, and still waiting to add a big AMA Supercross trophy to his AMA Motocross triumph last year.

He’s getting closer. He took ninth at the Anaheim opener, followed it up with a quiet fifth in Phoenix, and then grabbed a breakthrough second-place finish in Los Angeles. At that race, he even got a look at race leader Cole Seely. Then he finally led laps last weekend in Oakland before crashing and finishing third. 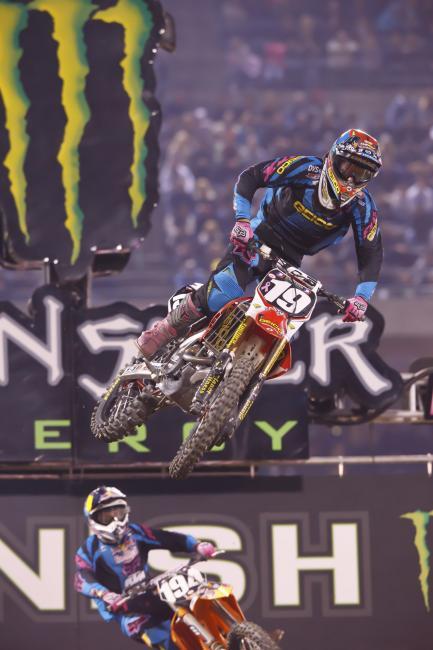 Tomac is slowly moving his way up the championship ladder.
Photo: Simon Cudby

In Anaheim over the weekend, he was ready. After another good start, he made a move on fellow rookie Ken Roczen, and went after race leader Josh Hansen. Hansen, struggling with a broken hand, looked ready to be taken, and Tomac slid inside him to grab the lead.

But the veteran Hansen wasn’t phased. He simply stayed inside of Tomac and executed an aggressive pass in the next corner to get the lead back. That pass seemed to knock the wind out of Tomac’s sails. He lost time and fell back into a battle with Roczen, while Hansen pulled away. Once again Tomac came close, but was denied victory.

On this night Tomac had the speed and the start. But Hansen ultimately used his experience to make a hard pass at the right time, and ice the victory. Just another lesson learned for the young kid from Colorado—the one who’s proven to be a very patient study.