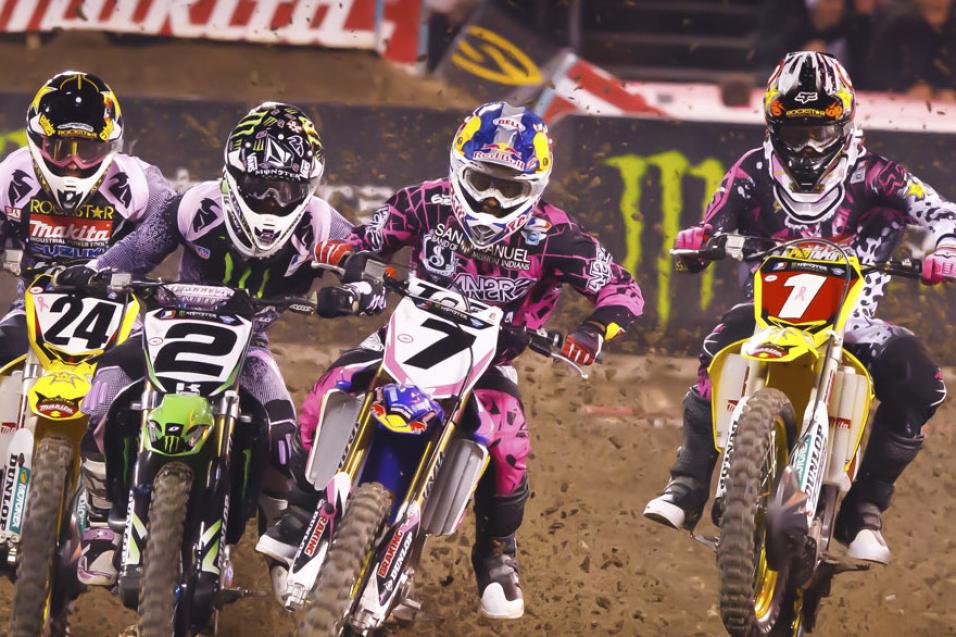 Advertisement | Advertise with Us
Angel Stadium Anaheim, CA Anaheim 2 (A2) Monster Energy AMA Supercross Championship
We’ve been waiting for this type of performance from James Stewart. You know, the “Watch this, I’m going to dominate this entire night by doing things that no one else can”-type of ride. It was Round 5 of the supercross series and the fact that Ryan Villopoto had won two races had caused some (including this guy) to wonder if he had reverted back to being, I don’t know, more normal?

The Anaheim 2 race was a tour de force for the number seven, and although he wasn’t the fastest in practice (mostly because he chose not to ride the second timed-practice for some reason) he blitzed his heat race and then in the main grabbed the start and took off for a complete twenty laps. His closest pursuer—Villopoto—admitted afterwards that he didn’t have the ability to once again chase down Stewart on this night and relegated himself to only losing three points in the championship series. 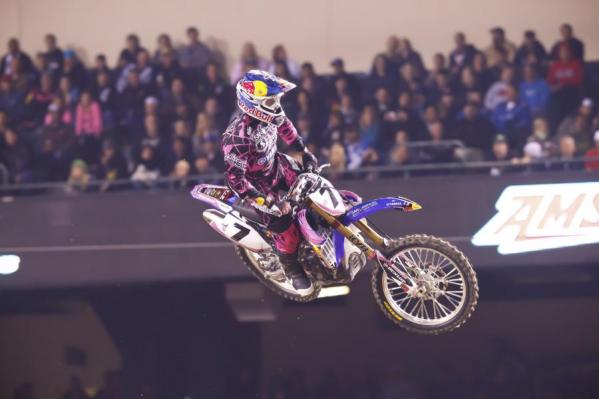 Stewart ran away with the victory at A2, his second straight.
Photo: Simon Cudby

Before the season I predicted James to win the title and one of my reasons was that he can do things on a bike that no one else can. I got more than a few emails and tweets asking what I meant by that, but nothing I responded back with had as much power as watching James make quad jumps out of triples. Right along the third-base and first-base line was two rhythm sections, and in the first practice Stewie quaded the one along the third-base line one time. He did it once more in the heat race and put it in his pocket. It was his ace in the hole.

The first-base line quad was probably a little easier than the other one, but it presented its own challenges. You couldn’t be short or long on it; it was disaster with anything but a perfect landing. RV jumped it a few times but came up short in the main, almost bought the farm, and told me he backed it down. When I asked Reed about it, he said he wasn’t comfortable enough to pull the trigger on it. And that folks is all she wrote on the night.

So that’s two wins in a row for James (and a five-point gap on RV) and he’s certainly getting his mojo back. This sport is so very mental and you can’t let someone get on a roll like the one that James is getting or it gets away from you quick. We’re going to Houston this weekend where the dirt will be a little different from what the guys are used to, but something that is pretty familiar is the race we just saw this weekend.