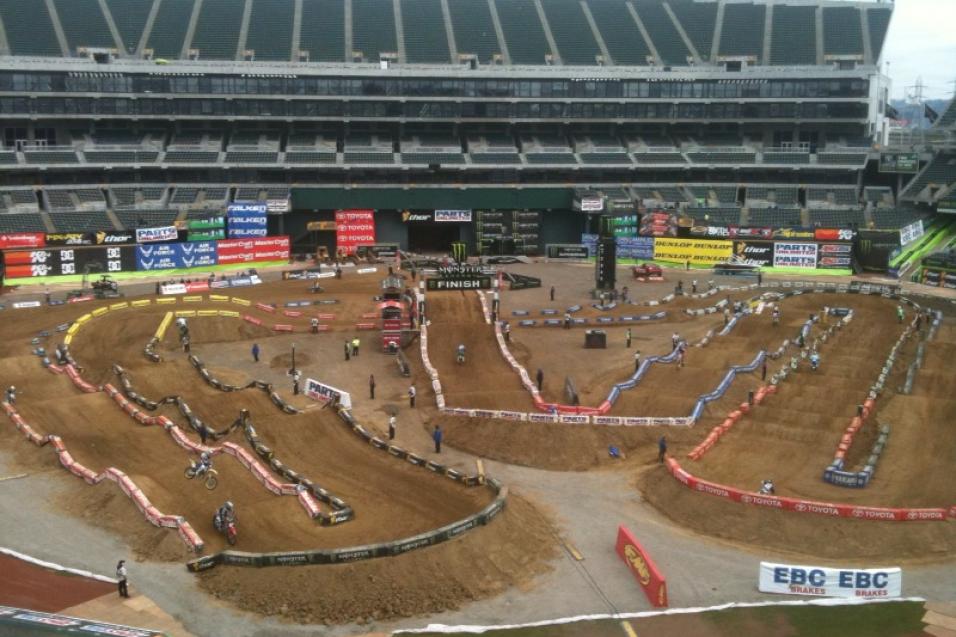 Welcome to Oakland Alameda Coliseum and round four of Monster Energy Supercross.

This Oakland track is very challenging. The start is short, the first turn is wide, and a diffuclt triple-triple rhythm lane comes up next. The riders hit a big triple and then turn over the top of a tabletop, which has two lines built into the top. Railing around the outside may be the fastest line, as the inside of the table has a lip that puts the riders up in the air.

Then riders race under the over/under bridge and into a short rhythm lane, then take on a right handed sweeper built entirely of black sand. Then it's back to the dirt, for a double and a big triple. Then comes the huge whoop section--by far the deepest, steepest set of whoops we've had all year. LA was pretty tough, but nothing like this. A few riders weren't even bothering to blitz them in the first un-timed practice, figuring they wil break down and form much different for the actual races tonight.

Then it's a another rhythm lane and then over the over-under bridge, which serves as the finish.

The soil is much softer than the hard-packed stuff we've had the last few weeks. In other words, this track is totally different than what we've had so far this year.

And to add another element, we are hearing of a 70 percent chance of rain after 6 pm tonight, and there's a very light drizzle coming down. Wow. Could be a crazy night tonight.

James Stewart went down on a big triple, dusted himself off and went to the mechanic's area to straighten his bike. He rode a few more laps and then pulled off.

Ken Roczen also went down in the whoops in the first practice. Austin Stroupe went down in a rhythm lane. Everyone is back and okay, but this track deserves respect.