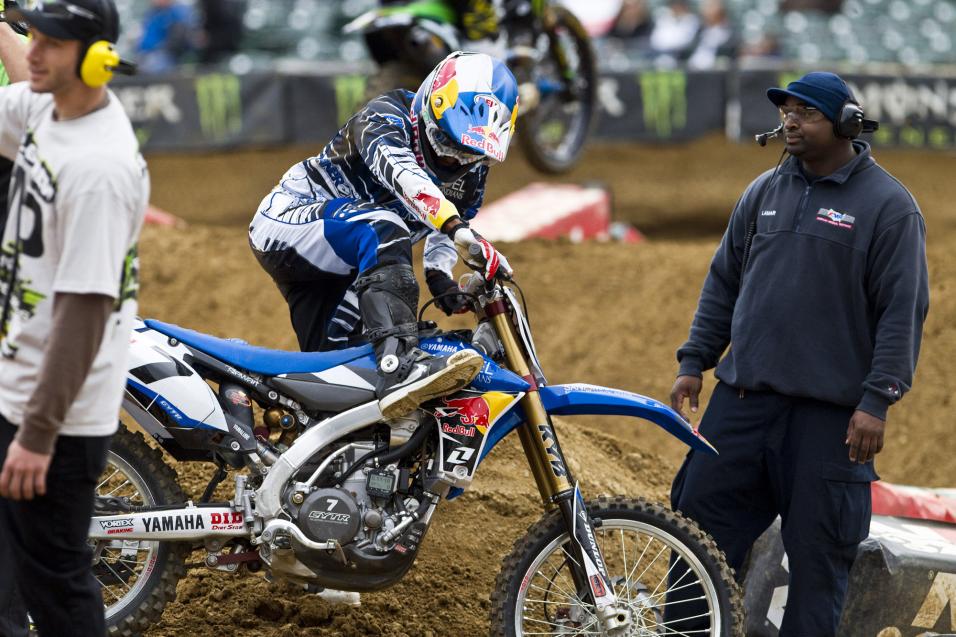 The first group of qualifying sessions are over here at the fourth round of Monster Energy AMA Supercross here in Oakland, Northern Calif, where the chilly weather is a drastic departure from the sun we had last week in Los Angeles.

The track is the most interesting yet, for several reasons. With a 70 percent chance of precipitation this evening, they were forced to build the track slightly smaller than normal in order to create extra space to push the mud into in case it rains. During track walk, the term, Arenacross, was thrown out several times, but in reality, the track is still much larger those of the Arenacross circuit. The dirt here is very fine, almost sandy, and the track should get pretty gnarly by the end of the main events. We are back to a single whoop section, but it’s a doozy. The whoops are the largest so far, aren’t consistently spaced, and if they hold up, will be a separating factor tonight. There are also a few sections that have alternate lines, including a cool right hander that can be railed from the outside, or jumped on the inside. Hats off to the track designers for building another exciting track with unique and original features.

The free practices were full of crashes, and at times, resembled more of a destruction derby than an AMA pro supercross practice. It was quite a spectacle to see some of the world’s fastest riders having a hard time familiarizing themselves with the intricacies of the track, including James Stewart, who had an ugly-looking crash on a triple that ended with his bike kart wheeling into an oncoming lane in the first, un-timed session.

When it came time for the timed qualifying sessions, everyone seemed to have settled down a bit, and there were fewer crashes, although the monster whoops were still giving everyone fits. In the Lites session, it was Kyle Cunningham who stood out. He looked smooth and aggressive, and was the first rider I saw to triple-triple the rhythm section coming out of the start stretch. He set the fastest time, 47.660, but Josh Hansen was just a tick off at 47.766. Ken Roczen followed with a 48.066, then Broc Tickle with a 48.146, while Rattray rounded out the top five with a 48.763. Travis Baker had a rough practice, finding himself on the dirt several times, and the usually speedy qualifier Martin Davalos was only able to muster seventh, with a 48.899. Last week’s winner, Cole Seely, was eighth fastest, at 48.967.

James Stewart kicked off the first supercross timed session by crashing in a rhythm section right off the bat. After getting up, he just stood on the side of the track, hands on his hips, and stared down at his bike for a few moments before picking it up and riding over to the mechanics’ area. Meanwhile, Ryan Dungey seemed to be gelling with the track, and he set a 46.413, the fastest lap at that point. Reed also looked good, especially in the sand section, and spent part of practice trying out alternate methods of getting through the whoops (blitzing vs. jumping through). At one point Reed was third fastest. Then, Ryan Villopoto set a ridiculous 45.964, but he was penalized at the end of the session for stopping on the track, and his time was taken away. By the end of the session, despite the crash, Stewart had climbed to his familiar spot at the top with a 46.084. However, he's still feeling the effects from his crash, and reports are that he's considering sitting out of the next timed session.

That’s it for the first round of qualifiers here Oakland. Make sure you keep it locked right here on Racer X Online, and follow us on Twitter, @racerxonline, for updates on the action.