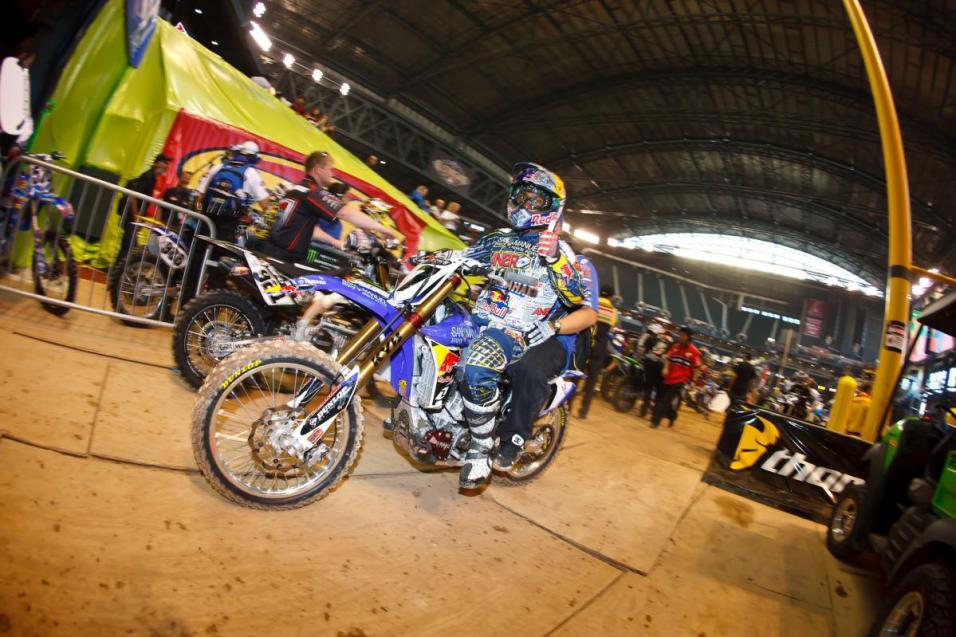 Good afternoon, and welcome to your practice report from the first timed session from Chase Field in Phoenix, Ariz. Right off the bat there are several noteworthy differences between this track and the one we saw last week in Anaheim. While last week’s dirt was wet and stayed greasy throughout the night, the dirt here is already getting dry and hard. The whoops here look a little deeper than Anaheim, but this week there is a straight approach to them, versus the double that immediately preceded the whoops at A1. No long rhythm section this time, instead there are a few smaller sections that have several options. Since a lot of the turns are already starting to look one-lined, these options could provide some of the night’s passing opportunities.

During Lites free practice, KTM’s Ken Roczen had a scary moment when he launched a triple and jumped completely off the left side of the track. He somehow managed to avoid the tuff blocks, and executed a surprisingly graceful landing on the very edge of the dirt. When qualifying rolled around however, Roczen was all business and set the fast time right away. Monster Energy Kawasaki’s Josh Hansen topped Roczen and held the fast time for several laps, but when the session ended, Roczen was once again on top of the leader board with a 50.435, just ahead of Hansen’s 50.686. If Roczen’s leg is bothering him after the crash he had in last week’s practice, he isn’t showing it. Martin Davalos wasn’t able to find the same groove he used to qualify second fastest last week, and he ended the session sixth fastest. 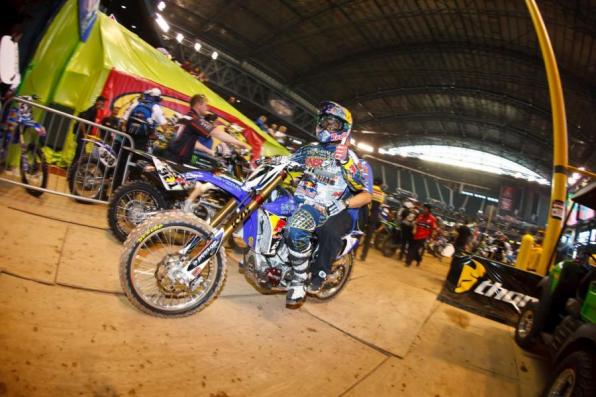 Stewart gives the thumbs up after collecting the fastest lap in timed practice. Session two coming up next.
Cudby photo

Next up were the big boys, and American Honda’s Trey Canard wasted no time in jumping to the top, where he would stay for several laps. James Stewart was in this practice, but if you were just looking at the fastest times, you would never know it. Finally, six laps into it, Stewart hit the button and rocketed to the top of the pack, and just like last week, the only person to beat his time would be himself. He was also the first guy whose lap times dipped under 50 seconds, although Canard and Villopoto would follow suit a few laps later. During the practice, some of Stewart’s guys were in the press box filming. This by itself is no big deal, as a lot of racers have someone film their practice sessions for them. What’s interesting is that when I was able to peek through the viewfinder, I noticed that in addition to filming Stewart, they were also getting footage of Chad Reed and Ryan Dungey. They may have filmed other guys too, but you can only see so much when you are trying to be sneaky.

That’s the action from the first qualifying sessions here in Phoenix. If we have time to post an update from the second sessions, we will. In the meantime, follow @racerxonline on Twitter, and stay tuned to www.racerxonline.com for live updates, all day long.