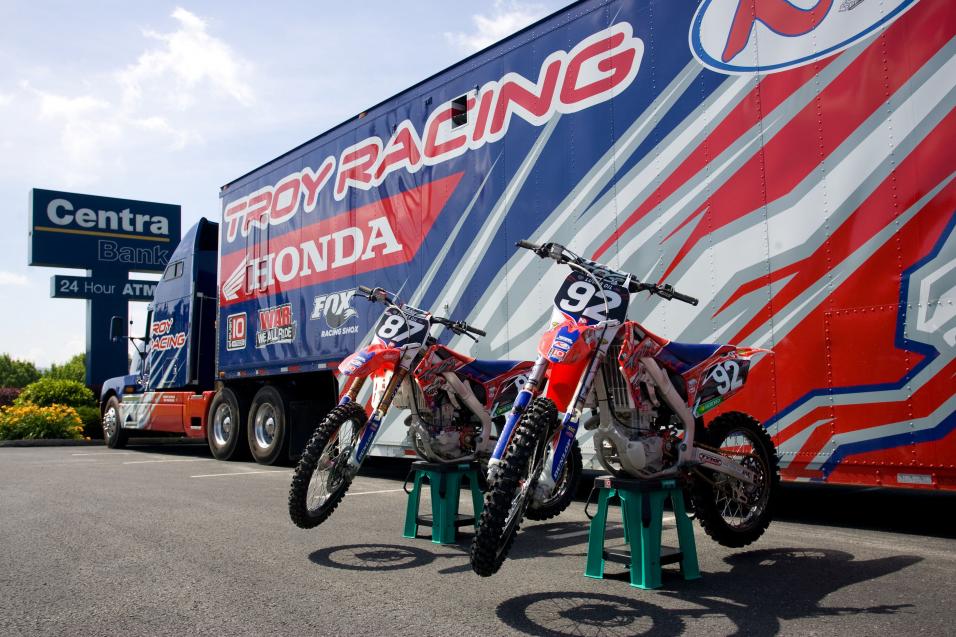 Many teams have come and gone in this sport, but few of them have had the success that Honda of Troy (and later, Yamaha of Troy) enjoyed during their peak years. The team has somewhat fallen off the map in recent years, but looked to be making a comeback in 2011 with Phil Alderton, the original manager, back at the helm. Unfortunately, not everything went according to plan, and Alderton is no longer associated with the team. Unhappy with some of the rumors he was hearing about his resignation, Alderton contacted Racer X and requested the opportunity to tell his side of the story. In this interview, he talks about his plans for the future, the team, and his reasons for leaving it.

Racer X: Why don’t we start off by refreshing the readers with a quick overview of your involvement with Troy Racing over the years.

Phil Alderton: I started the Honda of Troy Team back in late 1992, and then kept that going through 1998. In '99 we switched to Yamaha and won four championships through 2004. I parted ways with the team in 2004, and this past summer I came back as a team manager for the new Honda of Troy team. 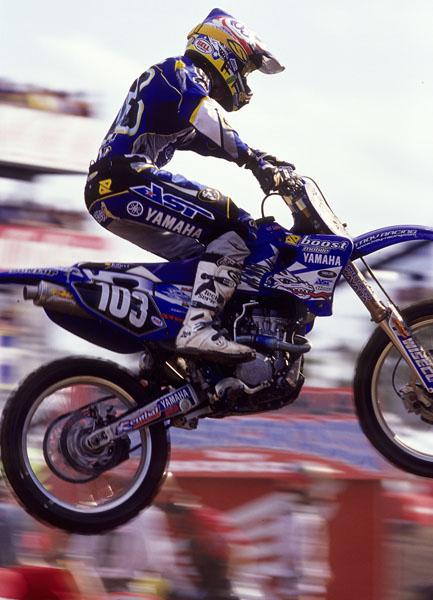 I had a falling out with my partners over a serious drinking problem I had developed at the time.

The team had some pretty good success in its heyday, didn’t it?

Oh yeah, they had some great success in the heyday. We had Ernesto Fonseca, Stephane Roncada, Chad Reed, and between those three guys, they won four championships for us. We won forty 125 Supercross main events, eight outdoor nationals, and had over three-hundred podium appearances. So I would say that we had some success, yeah.

You were named as the team manager for the 2011 Honda of Troy/Kilbarger Race Team. How did that come about?

I came on board with the Honda of Troy team in June, right at the start of the AMA Nationals last year. Chad Sanner had put it together with the Kilbargers, and at the end of the Nationals, Kilbarger and Sanner had a little bit of a falling out. Kilbarger wanted the race shop to be in Ohio, and Sanner didn’t want to move it from Pennsylvania. They couldn’t come to terms with that, and there was a lot of peripheral stuff going on, but that’s basically what it boiled down to. When they parted ways, Kilbarger wanted me to continue as the team manager with those guys in Ohio and build a team. He kind of understood that for the first couple years, he might have to pay for everything himself—there was no guarantee that there would be any sponsors coming on board. I explained that the way I did it back when I started it back in ‘92 and ‘93, I funded everything myself and after a couple years, when we had some success; the sponsors kind of came to me, and I was able to build it up over a long period of time, where ultimately it was self-funding. Kilbarger understood all that, and that was the way that we proceeded. It was a long-term plan, and we were off and running. 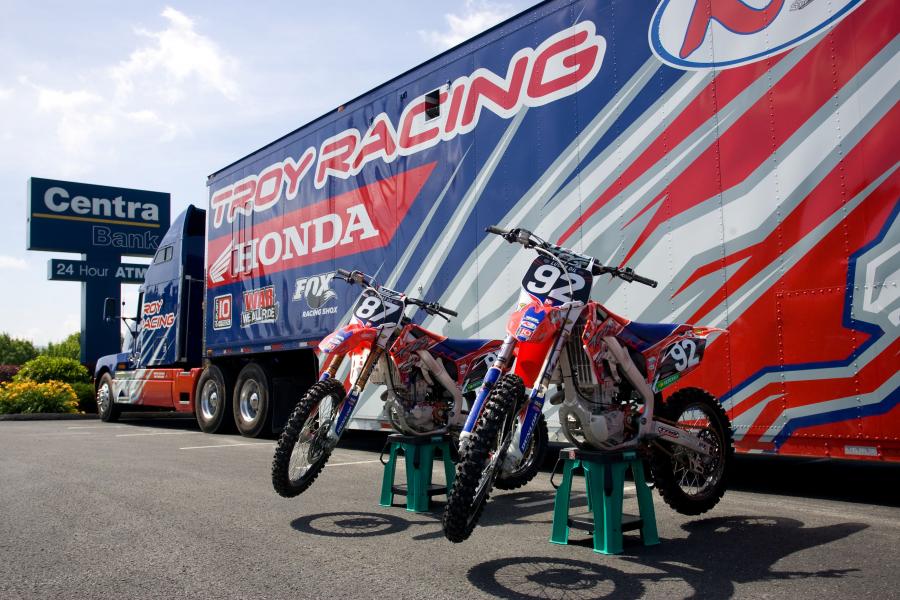 Honda of Troy rig at the High Point press conference.

You recently resigned from that position, and there’s been some rumors surrounding your resignation. What happened?

What really happened, when I first got together with those guys in September, it was to build a race team, that five, six, seven years down the road, would be successful and self-funding. I explained that it was going to be a long and expensive process; that was really clear, and everybody was okay with that. Initially I worked up a budget for two East Coast riders, two West Coast riders, and running all four guys outdoors. That was a little high, so we pulled that back to running three East coast riders, and outdoors, with no West Coast program.

Over the next few weeks, we picked the riders that we thought would be the best fit, out of the riders that were available. That turned out to be a slow process. I might have pushed that a little bit hard, but at that time we were getting in to mid-October, and the teams that we were going to be competing against had all their rosters full and were already testing. Plus, I wanted to get some sponsorship dollars coming in, and the first thing a potential sponsor wants to know is who’s on the team.

We went with Levi Kilbarger, Les Smith and Nico Izzi. I sent out letters-of-intent for those guys, well, obviously not Levi, because he was kind of on the team by default. Smith sent his back right away, but Izzi wasn’t too happy with the salary and sent a counter offer back. The Kilbargers weren’t in a hurry to get Smith’s letter of intent back, or to respond to Izzi’s counter. That probably should have been a little bit more of a red flag than it was at the time, but I was thinking, at least we’ve got riders, and I can start lining up team personnel and start talking to sponsors. I started working on that stuff and making progress, and in the meantime, Smith and Izzi were wanting to know what’s going on.

About that time, mid- to the end of October, I started having a little bit of a problem getting any answers from the Kilbargers. So I’ve got these riders, personnel and sponsors on hold. Honda of Troy (the dealership) was—and still is—going through a rough time, and they wanted the Kilbargers to buy the semi truck, or they were going to take it back, which they ended up doing. So now I needed to find another option for a truck, and the Kilbargers needed to make a decision on that.

So the entire first three weeks of November, I had all these people on hold again, and I was having a real hard time getting in touch with Kilbarger, let alone having him make any decisions. So finally, the Monday before Thanksgiving, we all had a meeting, and I asked him if this was really something that he still wanted to do. He said yes, but only if we could get some sponsorship dollars in place, and that he wasn’t going to fund the whole thing by himself. At that time he wanted me to tell Izzi and Smith to start looking at other options.... That was a little tough to do, and from those guys’ standpoint, there wasn’t a whole lot of stuff left out there.

Les Smith racing at Steel City for Honda of Troy.

Needless to say, I was a little bit disappointed after that meeting. I came back out to California and continued to work on all this stuff, and almost immediately the people that I had talked to about coming on board, personnel especially, didn’t want to quit what they were doing to become involved with a program that might not happen. It started getting really tough, especially with the lack of communication with the Kilbargers. In the meantime, I found out that the Smith’s were called and told to bring some suspension back and pick up their motorcycles. On December first, Izzi’s agent called me and told me that Izzi had to have his deal signed by noon, pacific standard time, on Friday the third, or he was going to go do something else. I had already kind of told him he might need to start looking for something anyway.

I couldn’t get Kilbarger to call me back, so I explained the situation to Levi, Kilbarger’s son. My concern at the time was that if we lost Izzi and Smith, and there wasn’t a team, and we’d also risk losing the sponsorship dollars that I was able to secure, which was $134,000. I was told at that time by Levi to let Izzi go and pick up his motorcycle. At that point I saw the whole thing coming apart. We didn’t have any riders finalized, I couldn’t get any personnel to come on board, and even if I could, the Kilbargers weren’t hiring them. We didn’t have a truck, I couldn’t get a decision from Kilbarger to buy one, and the sponsors didn’t really want to sponsor one guy. So, on Friday evening, I sent in a letter of resignation and bowed out.

Are there any specific rumors you would like to address?

I think the biggest rumor I want to address is that I had heard that the word was out that the reason there might not be anything going on—that there might not be a team—was because I had promised all this sponsorship money and didn’t deliver. That is one rumor I want to squelch, because I made it very clear, right from the outset, that I couldn’t guarantee any sponsorship dollars, that this thing might have to be completely self-funded for a while, and everybody was on the same page. That was one thing that bothered me a little bit, and I don’t want to throw anybody under the bus, but the stuff that I just explained, is actually what happened, so I just wanted to clear the air a little bit on my end.

How can people get in touch with you?

E-mail is the best way, alderton2005@yahoo.com. Thanks for your time.