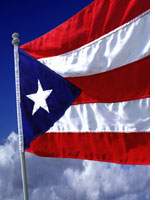 Following the lopsided 92-73 defeat the Puerto Rican men's basketball team handed the United States in Athens Sunday, many Americans were shocked. Not only did the U.S. team lose for only the third time in the history of its Olympic competition, it lost to a commonwealth of the United States.

How can Puerto Rico, whose residents are U.S. citizens, field its own Olympic team?

Puerto Rico can send athletes to Greece because the International Olympic Committee, the governing body that makes all decisions about the administration and operation of the games, has recognized the island's National Olympic Committee. Such committees are the official representatives of each Olympic delegation and are approved only after meeting criteria established by the IOC. But while the standards such national committees must meet are clear, the rules governing who can form them are considerably murkier. The Olympic Charter explains that "the expression 'country' means an independent State recognized by the international community," and the IOC recognized Puerto Rico as such an entity in 1948. Although the United States granted the island the right to elect its own governor in the same year, that power is nothing like full independence. The U.S. Department of the Interior still classifies Puerto Rico as an "insular area" of the United States—a "jurisdiction that is neither a part of one of the several States nor a Federal district." But apparently the IOC considers insular areas sufficiently independent to participate in the games; the committee recognized the U.S. Virgin Islands in 1967, Guam in 1986, and American Samoa in 1987.

Over the years, the IOC's practice of recognizing states that are not fully sovereign has generated controversy. In 1965, for example, the white elite of Rhodesia declared independence from Great Britain to avoid following through with a British plan to cede power to the country's black majority. Other African nations considered the new republic illegal, and in 1972, several of them threatened to withdraw from the Munich Games unless the IOC barred Rhodesia from participating. The IOC had earlier recognized Rhodesia under its colonial flag and thus found itself in a dilemma; eventually, the committee excluded Rhodesian athletes on a technicality related to their travel documents. More recently, the IOC angered some Israelis with its decision to recognize a Palestinian National Olympic Committee. Following the move, which came in response to the 1993 peace accords between the Israelis and Palestinians, Israel petitioned the IOC to bar Palestinian athletes from marching under a "Palestine" banner. Israel's foreign ministry claimed no such nation existed, but the IOC rebuffed the request.

And the US troops we so madly admire, congratulate and are grateful for, are full of americans born in Puertro Rico

The following is brief history of the military events in which Puerto Ricans have participated: