Momentum is a funny, sometimes fleeting, thing. When you have it, the goal is to hang on to it, and when you don’t have it, the goal is to take it from whoever does. But momentum, by definition, is a tough thing to overcome, although it’s not impossible. Also, in racing, momentum is essentially a zero-sum game, so if you don’t have it, you have to take it from the person who does. You can’t just acquire it from space.

For example, GEICO Powersports Honda’s Trey Canard started to pick up momentum at the Colorado National, grabbing a couple of podium moto finishes, and he gained momentum in winning the second moto (and overall) the following week at RedBud. Is this momentum enough alone to keep him headed down that path?

And we all know about the momentum Rockstar/Makita Suzuki’s Ryan Dungey has been carrying this summer...

Vet-class racer (well, he could be, anyway) Kevin Windham, who is filling in for Davi Millsaps on the Honda Red Bull Racing team, grabbed a very popular holeshot to start the first moto at Millville, and for the first seven laps (out of 16), he made life very difficult on young Dungey. Dungey was second from almost the get-go, but he couldn’t do much for Windham until Windham began to feel the effects of the considerable heat and humidity (along with the fact that he hasn’t raced since Las Vegas). 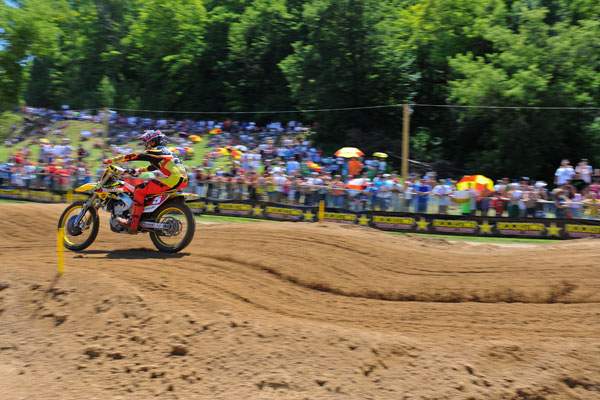 Ryan Dungey scored his sixth national win in a row at his home race in Millville, Minnesota.
Photo: Steve Cox

Other notable occurrences in the moto include Jagermeister KTM’s Mike Alessi falling in the second turn and being forced to come from the back up to 15th, and the returning Ivan Tedesco’s crash just past the third turn that landed him and GEICO Powersports Honda’s Bret Metcalfe on the ground. Metcalfe caught back up to 16th while Tedesco eventually pulled out of the moto. Also, with four laps to go, defending series champ (and runner up, at the time, in this year’s title chase), Chad Reed, pulled out, and the official story is some sort of a problem or injury to his neck. We’ll know more soon, but he sat out moto two as well.

Short grabbed the second-moto holeshot over Townley, Sipes, Windham, Dungey, Hahn, Chisholm, Alessi, Metcalfe and the rest of the field, and by the time the leaders came back into view from the back sand-whoop section, Townley had overtaken Short for the top spot. As the two battled into the second lap, though, Townley fell and Short inherited a nice little lead. But it wasn’t long before Dungey came knocking, and he got by Short on lap and proceeded to pull away to win by more than 30 seconds.

Windham held tough in third until losing the spot to Hahn, but then Hahn fell, so instead, Windham lost the position to Regal, who went on to chase down Short for second, pass him, and finish second in the moto (third overall).

At the finish, it’s Dungey over Regal, Short, Windham, Townley, Metcalfe, Sipes, Alessi, Chisholm and Grant. Overall, the win goes to Dungey over Short and Regal, with Windham fourth in his first race back.

Attempting to pick up where he left off at RedBud (out front), Canard grabbed the moto-one holeshot over none other than points leader Chris Pourcel from the Monster Energy/Pro Circuit Kawasaki team. Canard led the Frenchman for three laps before Pourcel was able to put a move on him for the lead. Canard began to fall back into the clutches of Pourcel’s teammate Jake Weimer periodically, but nearing the end of the moto, Canard actually reeled Pourcel back in, then passed him for the lead, which lasted for a lap before Pourcel got him back. 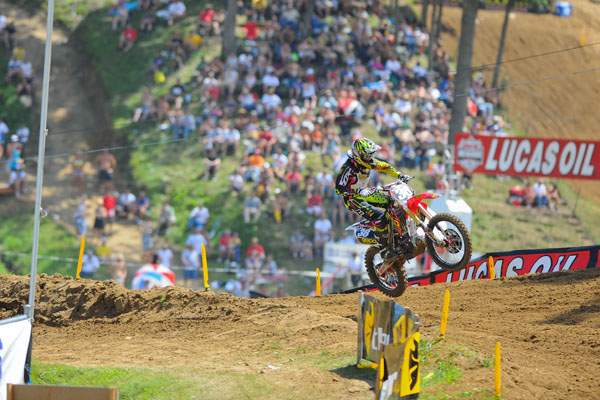 Trey Canard captured his second AMA National win in a row with a 2-1 score at Spring Creek.
Photo: Steve Cox

Wilson grabbed the holeshot in moto two, but Canard wasted no time in getting around him and establishing himself as the man to beat in the moto. Pourcel started at the tail end of the top 10, and a few laps in to the race, it began to rain. Not just rain, but rain very, very heavily. Wilson was forced to give up the chase, as Canard didn’t seem to slow down in the mud very much.

Canard went on to take the moto victory, and the overall for the second week in a row (and in his entire outdoor career), over Wilson, who grabbed second overall as well as second in the moto. Mud specialist (it seems) Justin Barcia was third in the moto, with fourth going to Rattray, fifth to Weimer, sixth to Tickle, seventh to Wharton, eighth to Darryn Durham, ninth to Tommy Searle, and 10th to Pourcel, who struggled in the sloppy conditions.

Overall, it’s Canard with the win over the four PC riders, Wilson, Rattray, Weimer and Pourcel.

Jessica Patterson got back to her winning ways at Millville, taking a 1-2 score to the overall victory over rival Ashley Fiolek, who went 3-1 to take second overall. While Patterson still controls the championship, it's clear now that Fiolek is going to give her fits as often as possible until the series ends. 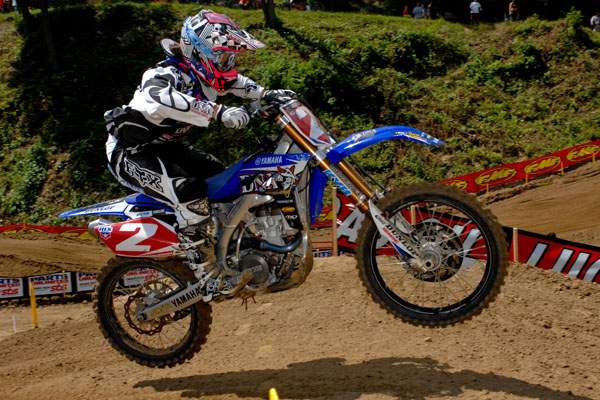