Sometimes revolutions start with a bang, and others with a whisper. When we were first introduced to the 2010 Yamaha YZ450F, we knew that was revolutionary with a bang. But the 2011 Kawasaki KX250F doesn’t represent that type of revolution. This is more of a whisper.

Cosmetically, the 2011 KX250F doesn’t look much different from the 2010 model. But the revolution in this bike is almost completely hidden. 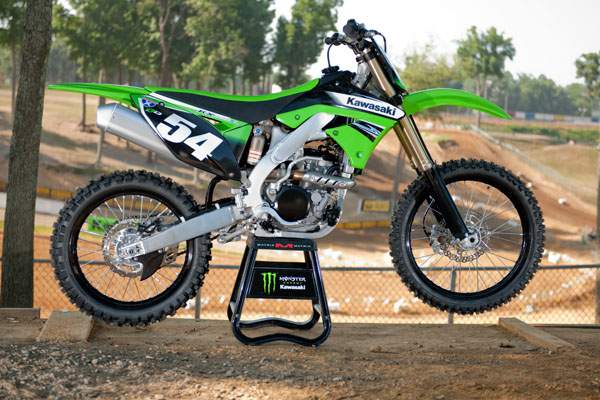 What is this revolution? The forks. Made by Showa, and classified as "SFF" (Separate Function Fork) technology, the forks are something never before seen in modern motocross. Don’t get caught up too much in the name, though. It’s not really important. What is important is what it does, and how it does it.

And the funny part is, this idea is so simple that it’s almost baffling how nobody has done it in the past 20 or so years since upside-down forks came to be.

Here is how the forks work: The right-side fork handles compression, the left-side fork handles damping. It’s that simple. Kawasaki claims a 25% reduction in operating friction, and that’s not hard to imagine, as there is now only one spring causing friction on one side, and only one plunger on the other side. Yes, the plunger and the spring are necessarily bigger, but in terms of surface-area friction, there is much less.

Now, while this didn’t hit me at first as being that big of a deal, it was once I hit the track. 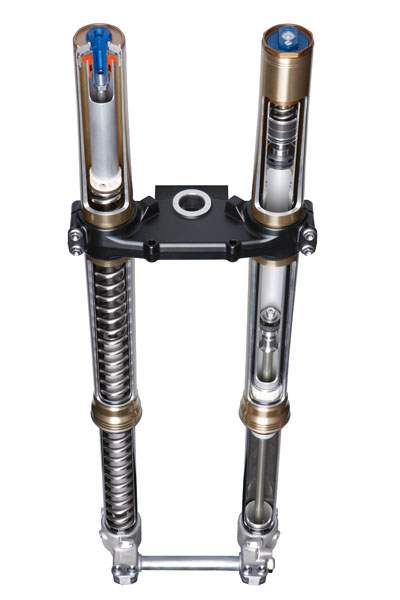 As viewed from the front, the right fork (on your left) handles compression, and the left (on your right) handles damping. The blue nut on top of the right (your left) fork handles ride height.

The intro was held at Budds Creek, where the YZ450F intro was held last year, and the track is notable for a couple of reasons – hills and off-cambers. The first time out on the track, the bike felt a bit like a stink-bug – the tail end was too high going down the hills when on the brakes. But it turned really well.

I went into the pits and one of the Kawi techs took a wrench to the top of the right fork to adjust the ride height. He said he brought it up two millimeters. When I went back out, I immediately noticed that it wasn’t diving anymore up front, but also that it wanted to stand up in the turns, so I went back in and asked the tech to split the difference. He went back down one millimeter on the ride height, and that did the trick. The bike quit diving and still turned like a champ. 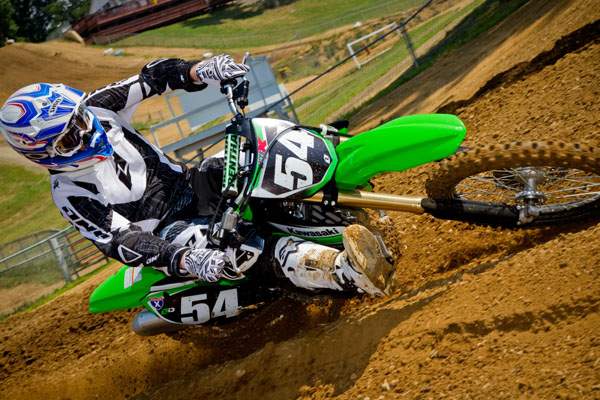 After the forks were adjusted, the bike felt perfectly balanced, and it still turned like a champ.

And to me, this is genius. This is a level of tune-ability that we haven’t previously seen, even with factory bikes. At no point did the forks feel funny, or like they couldn’t handle the obstacles being thrown at them, but they were super-easy to set up, and it’s easy to imagine the versatility an adjustment like this could give for track conditions on any given race or practice day.

Thumbs way up for this innovation.

The other major change to the new Kawasaki is that it now has fuel injection, just like the Honda in the 250cc class, and just like the big-brother KX450F got last year. Kawasaki calls it "DFI" instead of "EFI", which stands for "Digital Fuel Injection".

However, in the past, people have figured that fuel injection would rob power, especially in a 250F. All I can say is that there is no way that’s true in this case. Of course, there are plenty of other engine changes – like changes to the piston, exhaust, etc. – that you can read about on the Kawasaki website, but overall, if this bike lost power over the 2010 bike, I’d hate to ride the 2010 bike. 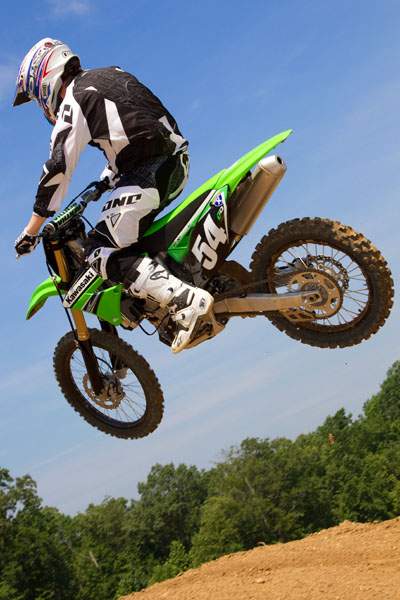 The bike has torque, but it still revs. This is a step-up jumped wide-open in second gear, and it still had more to give.

The 2011 Kawasaki KX250F is a revolutionary bike, even if it doesn’t look it. It’s powerful straight out of the dealer, and it’s almost guaranteed to handle well, as you have all of the adjustment ability necessary to make sure that’s the case.

The only question is: Will aftermarket suspension-modification companies suffer or thrive with this new system?

For more information on the 2011 Kawasaki KX250F, go to the Kawasaki website, or head to your local dealer. 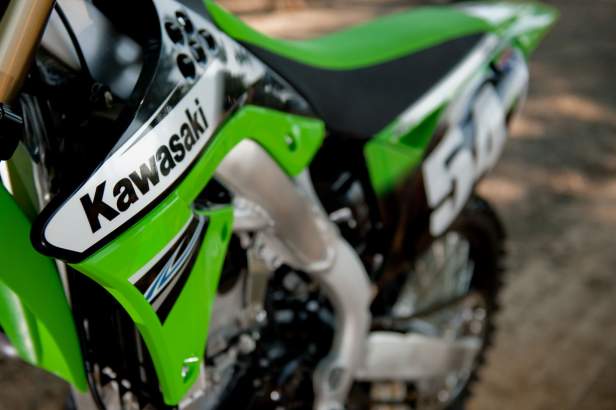