TLD/Lucas Oil Honda’s Ben Townley had a weekend reminiscent of the old days, if you can call them that. At the US GP at Glen Helen, the Townley that showed up was the same Ben Townley who matched Ricky Carmichael’s pace at the 2005 MXdN in France, who won a few GPs, and then came to America and gave Ryan Villopoto all he could handle in the AMA Nationals. After a couple of years off to recover from injuries, Townley is back, and at Glen Helen he showed that he’s not just back in name only. We talked to him after the race while he sat in a recycle bin full of ice water. It looked comfy, too.


Racer X: It’s been five years since your last GP moto win, and here you are again...
Ben Townley: It doesn’t matter what race it is, but to beat the best people in the world – whether it’s here in America, or in the World Championship, or wherever it is – just to win again was my goal, at the highest level. And I don’t feel I’m anywhere near as good as what I can be yet. There’s so much more to come, and once I get to that point, it’s going to be pretty cool...

You made that second moto look easy...
Yeah, and that’s the thing: I said to some people yesterday, after that qualifying race, that I felt like I’ve got some of the old magic back a little bit, but... Last weekend, I did it every now and then; yesterday, I sort of put pieces of it together; and today felt great. This morning in the warmup, I had a really good warmup, and in the first [moto], following Mike [Alessi] and Tony [Cairoli] wasn’t hard for me; I wouldn’t say it was easy, but I was doing it. That’s when I kind of thought to myself that I needed to get by Mike, because I could go faster, so I felt like, speedwise, there was no problem at all.

Last weekend, you talked about not being in good enough shape, and said you felt like you missed an opportunity because it was cool and all that, but it was not cool here, and it was not smooth...
Yeah, but, to be honest with you, the GP guys aren’t even in summer yet [back home in Europe], plus it’s tough to travel – dealing with jet lag and all that – and you don’t take that lightly. I mean, I’m definitely not in the best shape, and no bones about it, it was very hard for me. Mentally, I had to concentrate so hard... Mentally, it was just as hard as it was physically.

What’s your opinion about the US GP now that you’ve been here?
I guess I’m a big fan of GPs, and I’m disappointed with the crowd turnout, but I don’t know if that’s going to be any better wherever you go in America; this is the ultimate motocross location. It’s hard when you don’t have those huge draw-cards [big-name riders] – the people don’t really know the GP riders here. So it’s hard. In some ways, I’d like to see it happen, but at the same time, if it’s not going to be a bigger show than this, it’s hard to justify seeing it happen, really. I’m of two minds about it, to be honest. 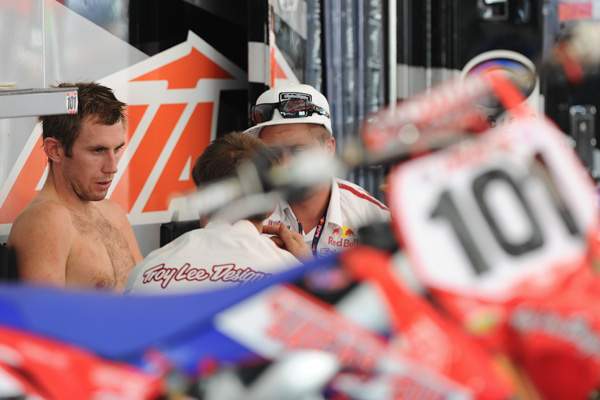 Ben Townley talks over some settings stuff with his team after warmup on Sunday.
Steve Cox Photo

What was your motivation for racing here instead of just coming and visiting your old GP friends as a fan?
Troy [Lee] obviously wanted me to be out here for the team – it’s good for their brand – and for me, I had that stupid injury [his internal injury], what was it, nine weeks ago or 10 weeks ago? So, I need the time, and that was way better than practicing. To be honest, after the last weekend, we didn’t have the best setup, and we found that out by racing, then we came here, and we actually found some more changes this weekend – compared to yesterday, we’ve made a big change, so we needed the race time for testing.

Can you talk about what happened between you and Alessi in the first moto that ended your run up front, more or less?
It’s just Mike being his usual self... You know, I passed him around the outside, and I was in front of him, and out of nowhere, he squared the turn off... To be fair, because of the way I passed him, I didn’t quite hit my turn right, and he had every right to come up the inside of me, but I was going in one direction and he was going in almost the opposite direction of that; we were doing a left-hand turn, and he was sort of veering off to the right, so... It’s just him. Nothing more to say about that. Did you see me go out off the start line [for the parade lap before moto two] and just roost the hell out of him? He was going up on the side of me, and I jumped my back wheel off the ground and just f@#%in’ showered him... [Laughs]

Knowing what you did in that second moto, does it make it a little bit harder to swallow what happened in the first moto? You could’ve very likely had the overall today...
I mean, it means a lot to win here, but at the same time, it didn’t pay points for me, so it’s not a big deal. But yeah, it sucks. I walked past the podium thinking that I should probably have been standing there. Those trophies are cool. I’ve already got two of them, so I was hoping to get a third one.

Does this change your outlook at all for the next few nationals?
Not really. I think, on American tracks, the American riders are faster. Like, I think if we would’ve had [Chad] Reed and [Ryan] Dungey and guys like that out here, it would’ve been a lot different. Just because I did well here this weekend doesn’t mean I’m going to be back to winning next weekend, you know?

The guy who won the second moto last weekend was here...
Yeah, I know. It’s a bit of a confidence booster for me, but at the same time, I’ve set myself a four-race plan right now, and I hope to be doing something like this in the Nationals by maybe Colorado or Budds Creek.

Is this a bit of a shot across the bow for the rest of the guys that you’re going to be racing against in the next few weeks? Like, "Hey, I’m back... This is the real Ben Townley."?
Not quite, no. I’m definitely showing that I’m on my way back, but I’ve still got a little bit to go, and I don’t want to put the cart in front of the horse right now.