Salt Lake City is always a special race, and a race where the tuning of the bike is important. SLC is at more than 4,000 feet. Bikes are really slow up there. Teams change compression ratios, injection maps, or jetting and gearing. 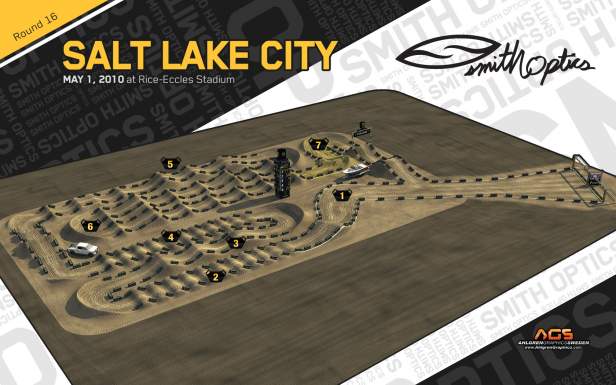 1. We can see that they made an outside start a la Vegas, which is good, since Rice-Eccles is a little smaller. It makes more room for the jumps inside. It's good for the crowd - they will see the first turn, unlike in Vegas.

2. This is the first of two sets of whoops, which is always good and technical with a nice 180-degree turn following the set. It's always a great spot to pass and where you can make a difference. It will be important to try not to slow down too much with a big single before the whoops.

3. Then we have the triple. They are always pretty much the same length, but the bikes being slower, they'll have to gas it a little more. Back in the day, the 125s would dread those altitude triples!

5. Jump-on-jump-off-triple: this is a basic section that we see pretty often. Depending on how hard it is to get over the jump-off section, the triple could be technical. Here again, it's 64 feet but feels like 80 at sea level.

7. The famous sand pit, and it could be possible to jump over and across the first sand part with the last rhythm-section jump. I was never a fan of the sand pit as a racer, but it looks good on TV since I stopped racing!