For this week’s Smith Optics Track Walk, sidelined privateer Daniel Blair takes us on a lap. 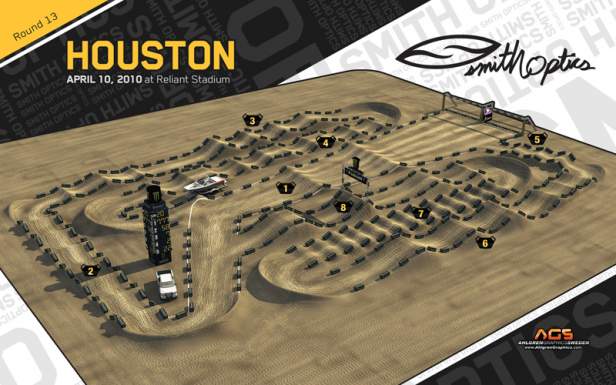 The first thing that comes to my mind when I think of the Houston Supercross is how amazing the dirt is. Houston is by far one of my favorite rounds, and this year’s track looks pretty good.

1. I’m not sure how big the Dirt Wurx guys are going to make these rollers on the start, so riders might be able to double them or just have to attempt an extreme Bubba Scrub down the start straight. If you can double these rollers, you might want to stick to pulling a tear-off somewhere else, because there definitely won’t be any hang time.

2. This rhythm section is going to give a lot of options. Every jump seems to be equally spread apart and the same size, so it will be up to the riders to figure out which option is the fastest. If I were racing, I would easily be able to triple in and quad out. I don't think anyone else would be able to do it, but that's because I have extreme talent that nobody else has, except maybe Travis Pastrana.

3. Up next is the quad. This should be a fan favorite, with all the riders skying out what will probably end up being about an 80-foot gap. I have been watching a lot of BMX lately and have noticed how much faster it is to manual the obstacles instead of jumping them. This jump is where that technique could really come in to play. Instead of quadding the jump and wasting all that valuable time floating in the air, I think the fastest line would be to manual the entire quad. At least that’s what I’d do.

4. This next rhythm section looks awesome. Depending on what size bike you’re on, the options are endless. I really am not sure what option would be the fastest, but if you watch any videos from the Kawasaki test track, watch what those guys do—it looks like their practice track is pretty close to this one. My first guess would be to triple onto the first table, jump off to the next table, jump off again, and then table over the single into the berm.

5. I really think the AMA needs to be careful on this next section. Going down the start straightaway backward is dangerous, especially on the parade lap—just ask my buddies Li’l William Hahn and Blake Wharton what it feels like to collide on a parade lap. After you cross the start, you have a little roller section, which drops down into a right-hander, and then you have a small triple coming out of the corner.

6. The next triple looks pretty easy. According to my measuring tape, it looks like it will be approximately 65 feet. By my calculation, this gives you at least two seconds of airtime. In these two seconds, you can do a number of different things: pull a tear-off, point to hot chicks in the crowd, wave to your mechanic or team manager in the tower by the finish-line jump, or simply just try to hit it fast and win the race. I know which three I would do, but maybe that's why I’ve never won a race. 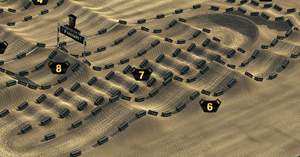 7. Next up are the whoops. Do you know where they got the name whoops? A few years back, someone built a set of these stupid little bumps, and after the track builder was done, he said, "Whoops, that's the stupidest thing I’ve ever built." I hate whoops. I suck at whoops. If it weren't for whoops, my career would have gone in a whole different direction. Instead of watching Bubba’s World on TV, you would be watching Daniel’s World. I would be filthy rich and famous, and I definitely wouldn’t have time to be sitting behind my computer doing a Racer X Track Walk.