I wanted to switch it up a little bit this year. It just always seemed like the start was kind of in no-man’s land, so I wanted to move it to bring it closer to the fans. I also wanted to have the finish line closer to where the NASCAR finish line is. I think it’ll be cool for the fans to be close and able to see the finish. I really think with the start and finish there, the fans will feel more a part of the race. Also, the track will be the same for the amateur supercross on Sunday, but we’re just going to tone it down for everyone. 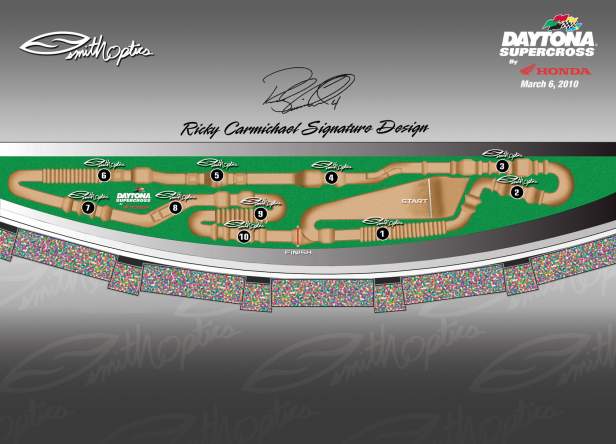 You see where it says “Start?” If you drew a line below the word, right there is where I'd try to line up, a little left of the dog house. You then go into a left-hander, and then go into a little tabletop. You’re just going to roll over it.

1 - After that, there’s a set of whoops, which will be the longest set on the track. They’ll be rough and chewed up; typical Daytona whoops.

2 – Then, you go into a left turn there and there’ll be a little double, and then into a right-hander and there’ll be a three-footer, then a roof-peak jump, and you can either go triple-triple or double-double-double into the corner. This left-hander will get some good grooves in it and it’ll be pretty much the same as years past.

3 - This next section, some riders will probably choose to hit the first three-footer and go all the way onto the tabletop, off the table onto the first single, then double, triple out. There’s a little single after that, just to slow the riders down, then they go into a little chicane. It’s hard to determine which line will be the fastest here, as the track will change throughout the day.
{LINKS}
4 -5 Where the old finish line was, they’re going to have a tunnel so we can get the bikes onto the starting line, so this will be a pretty basic jump onto a table. You’ve then got a little straightaway and then a little indentation into the dirt, a dragonback, and then another indentation, similar to what they had last year. It’s a really cool section. It gets all rutted up and it’s a fun place to watch as the riders will come into this wide open.

6 - Next is a little tabletop, and the popular line will be to land in the pit, and then they’ll jump out of the pit into the whoops. You make a tight left next, which is where the start used to be, and that’ll get really rutted and rough coming in and out. I’m sure there’ll be multiple lines here.

7 - Next is a four-jump section, but it’ll probably be triple-single, or double-double – no quad. But this depends on how steep the take-off is. You may have someone go for the quad!

8 – Then, you turn left and there’ll be three small tabletops. You turn right and hit two tabletops, which the guys will probably try jumping table-to-table.

9 – 10 - Another right-hand 180-degree turn here, which leads directly into a small whoop section. Since it’s a short run leading into them, I think most guys will be jumping through them. Then, you turn left, another 180, and you go into a five-jump section, which will be double-triple, or triple-double. Most of the Lites guys will probably be going double-triple.

For more information on the 2010 Daytona Supercross by Honda, including ticket information, a rider list and a special Ricky Carmichael video invitation to the fans, click here.