For this week’s Smith Optics Track Walk of the Atlanta Supercross, Honda Red Bull Racing’s Andrew Short is going to take you on a lap. Take it away, Andrew.

This race is known for its loud, crazy atmosphere with one of the largest crowds you race in front of all season long. The red Georgia clay makes for a demanding race surface because of all the bumps and ruts that form, and there is a need to adapt to the track changes, as it deteriorates far more than any West Coast track. 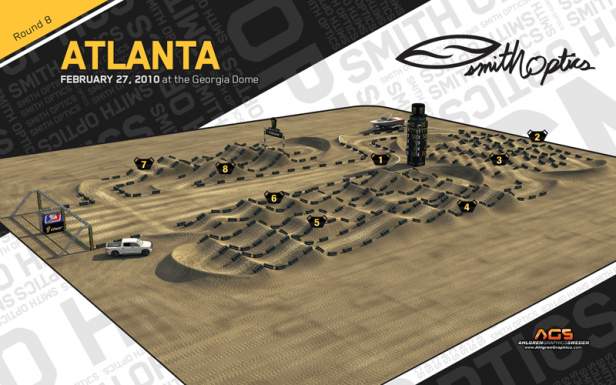 1. This track offers a long start straight where a quick jump will be important, but even more important will be shifting and keeping the power to the ground and getting to the first turn first. The start looks really even in terms of gate choice—whoever gets to the first turn first will control the switchback. And these flat turns can throw people off in the main when it gets bumpy, as the rider’s suspension is so stiff for supercross.

2. This first rhythm lane looks pretty simple, with a focus on keeping your momentum up. It depends on how these jumps are built, but you may be able to jump all three as a triple or do two-one.

3. Next up are two 180-degree bowl turns filled with back-to-back whoops that are going to be perfect passing lanes. These whoops will get severely cupped-out and rutted, similar to what the riders saw in Indy this past weekend.

4. It will be interesting to see the quad jump replace the famous triple and see how big they actually make it. This could be a struggle for the 250Fs and a ton of fun for the 450s and the fans. If the jump face ruts up, look out—it could get dangerous!

5. The next double is something you have to charge through, because there are two 180s coming up with a big rhythm section and numerous ways through them. Whenever there are two 180s together, it’s always great for passing.
In the first rhythm section, you can hit the first jump and bounce off the second one onto the table. You’ll then go off the table over the single and triple from the second tabletop into the corner.

6. In the second rhythm section, the 450s should be able to triple-triple-single onto the start straight. This is where they’ll get a message on the pit board from their mechanic. But I expect the 250s might have to wheel-tap or bounce over the first triple, then triple-single out onto the mechanics’ straight. My guess is as good as anybody’s on the rhythm section; it really depends on the ruts. A general rule is you want to stay on top and not get into a rhythm where it pops you up really high.

7. This track offers a good mechanics’ area that leads you into the Travis Pastrana special, which is the dragon-to-dragonback with the single in between it. The 90-degree left-hander before the dragonback should funnel everyone to the inside, because going outside would be covering too much real estate to be fast. These dragonbacks are very difficult, and at Anaheim 3 and Indy 2009 we saw a lot of crashes (Anstie and Stewart). It would be great to see the riders get from one dragon to the other. At A3 the dragon-to-dragon obstacle didn't have anybody clear it like they did in Indy. Can they do the dragon-to-dragon at Atlanta?

8. Finally, you get to the fifth 180-degree bowl turn and the finish-line double before you’re back onto the start straight.