Whenever someone mentions the Las Vegas Supercross finale, we always seem to end up talking about Doug Henry's historic win there. After an injury sidelined Doug for several rounds in 1997, he returned to action in Las Vegas aboard a very special Yamaha prototype: the white YZ400M, the four-stroke the company was about to bet big on.

Amazingly, Henry won that night on the hard-packed Vegas clay,and in doing so became the catalyst of the four-stroke revolution. No professional AMA Supercross race had ever been won by a rider on a four-stroke before Henry came along, and it was a snapshot of the future. Twelve years have passed since that night, and this Saturday evening every single rider on the track will have the aide of valves and cams.

So who better to preview our final Smith Optics Track Walk, than the legendary Doug Henry? We’ll pick things up just after the starting line and “Thunder Alley.” 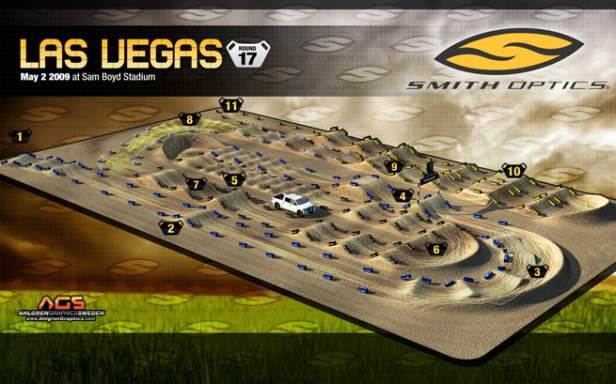 2. I think this will be exciting for the riders because it’s going to be such a fast straightaway and heading into a left hand corner you’re really gonna have to be careful. You’re gonna want to go as fast as you can but you gotta watch your speed because with the conditions of Vegas it’s gonna  get hard, slippery, and maybe a little bit marbley. I think it’ll just be a nice place to actually take a rest for some of the guys.

3. Looking at the track map the outside is gonna definitely be the faster line without having those obstacles and carrying your speed will be the way to go. The guys building the track are gonna have to keep an eye on how many obstacles they put on the inside corner to make it two lines. It looks like you could jump the inside two, go to the outside, and maybe square up and jump out before the finish line.

4. Even though it’s an easy obstacle, the finish line is a great place to make up a little bit of time if you can absorb the jump and keep your height low and your momentum forward. [DC: They call that a scrub now]. Yeah that’s called a scrub!  That’s the definition now, but I was gonna give the old-school way. The more speed you can carry through that jump instead of over it, you could definitely knock off a tenth or two a lap if you’re good at that.

5. Heading into the whoop section I think those are gonna be rock hard, blue groove, I think you’ll be able to go just about anywhere and not have to worry about holes or a big whoop or a small whoop or anything like that. Coming out of that corner into that next whoop section I’d click it up a gear and use a lot of the torque of that motor. Even on a 2-stroke you bring it up a gear and it really helps you get through the whoops a lot better. It keeps your front end up, it gives you better traction on hard conditions, so I would definitely kick it up a gear and get through them whoops a lot easier.

6. I’ve seen these [obstacles] at a couple different races and it could make for a couple different lines because you can double and go to the inside, and maybe snake around the inside. It’s kind of tricky but you might be able to triple and keep momentum to the outside and that might allow you to triple off the next jump and carry more momentum down that straightaway.

7. This is the same as #4. Keep it low and set up for that sand. You’re going to be landing and turning it looks like, you’re gonna be turning on a little hardpack to sand and some of that sand is going to get pushed out onto the hardpack section. That right hander after the triple is gonna be really key to getting through the sand and not just washing out. I can see a lot of guys sliding out right there.

8. The sand is going to be changing every lap, and these guys are gonna be set up for hardpack conditions, so they’re gonna have tires with not much spacing and they’re gonna get into that sand and it’s gonna be tricky, but depending on how the holes form, that could be a really good place to pass.

9. These guys will probably get out there and get two good lines through this section and that’ll be it for the evening. They’ll just try to improve every time they go through that section to try to hit the downsides, gas it, stay low and just really work on the timing aspect of that section. I don’t see it changing very much, I think they’ll get it down and stick with it through the night.

10. Those step-on-step-offs are a great place to make some time or lose some time so hopefully you try to make some time. If you can get inside your competitor and just have them bobble to where they couldn’t step-on and step-off, that’s a second and a half or at least a good second advantage if you can do that. If you’re in front of somebody you really need to protect your line and not let somebody force you to roll that first jump. It’s key to be able to get through that corner clean, step-on-step-off, and again you have a basic triple where you just want to keep your momentum forward into #11.

11. This is another fast corner, it’s gonna be slippery, and these guys are definitely gonna need some supermoto skills out there that’s for sure!