This week's host for the Smith Optics Track Walk is none other than our own David Pingree. Ping used to be a fast guy, but now he's in charge of other fast guys, and those guys return to action this weekend in Seattle when the series returns to the West. 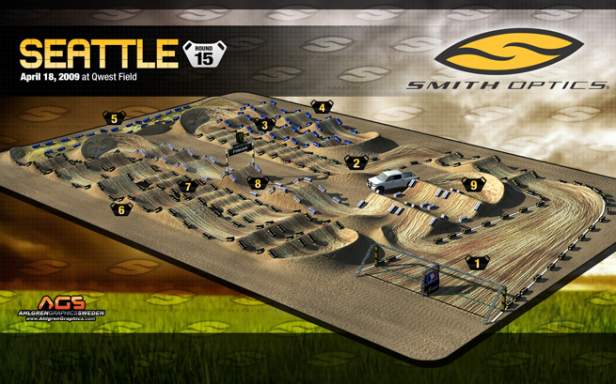 1.) Put your mud shoes on, folks, because its time to walk the track in Seattle. One thing for sure about this start is that you have to be on the inside. If you are lining up on the outside you are going to get a good view of the cheap seats just over the first turn berm. There is a standard 3-5-3 coming out of the corner that riders will either triple over, double-single or smash into the face of the second one and bounce over the third.

2.) This little chicane section will be critical. If you race from inside to inside to protect your line then you aren’t going to be able to get a drive into the whoops, or “Hoops” as RC would call them (or whoop-de-doos as anyone from the 1980’s would call them). There haven’t been a lot of long difficult whoop sections this year for some reason so hopefully this set will be challenging.

3.) This brings us to our first rhythm section. It’s hard to tell what will be the fast way through by looking at a digital drawing but I would guess that a 3-2 or 2-3 combo will be likely. And of course James Stewart will just seat bounce all five of them.

4.) The following corner looks like it will good for block passing. I like it any time the Dirt Jurks put in a 180 degree corner because it opens up passing opportunities. If you make it our of this one without being torpedoed by the guy behind you there is a relatively simple triple jump in front of you. Just pin it off the face and throw the bike sideways as you leave the lip to lower your trajectory while keeping enough speed to land in precisely the correct spot on top of the landing. See… it’s relatively simple.

5.) Section five is either sand or the track runs over the stadium’s septic tanks because the soil is discolored. My guess is sand and it will be cool to have a section this long because it will get rough. There should be some passing in here if they create multiple lines. And if it rains this will be the best part of the track.

6.) This is a no-brainer. Everyone will double-triple-double through this section. If they can’t do that then they should park their bike, head to the stands and have a hot dog and a Budweiser.

7.) This section will be more technical. It starts with a simple double but that sets you into what looks like a pretty good set of whoops. Again, I hope they make these big mostly because all my riders are good in the whoops. You have to be careful here not to get too much speed going in the whoops because you will slam into the face of the double at the end. Go too slow and you will be casing that little double into the turn.

8.) The finish line section looks like a little triple and then a fun little finish line double. Of course that “little triple” could be much more daunting when it’s made of real dirt and sitting right in front of you. If you can only double and then single you will lose a bunch of time to the guys who “give it the berries” and get over all three. Don’t forget to scrub the heck out of that finish line jump.

9.) This section could be key because you could lose a lot of time here. It doesn’t look like you can make either of these doubles from the inside. But if you are racing closely with someone and you go wide, they are going to park you. And if neither of you are jumping it the guys in front of/behind you are going to pull away/close in. It could play a role in the race’s outcome. Of course, if the rain comes down like it has a tendency to do in Seattle then everything I just wrote is a bunch of crap and I’ve totally wasted my time. Guys will be lucky to double anything and staying on two wheels and getting a start is all that will matter. Right now the weather forecast is for 30% chance of rain all weekend. If you’re going to the race, the best advice I can give is bring an umbrella.