This week’s Smith Optics Track Walk is brought to you GEICO Powersports Honda's Brett Metcalfe, who should have been racing but instead will be watching from the stands after a shoulder injury. 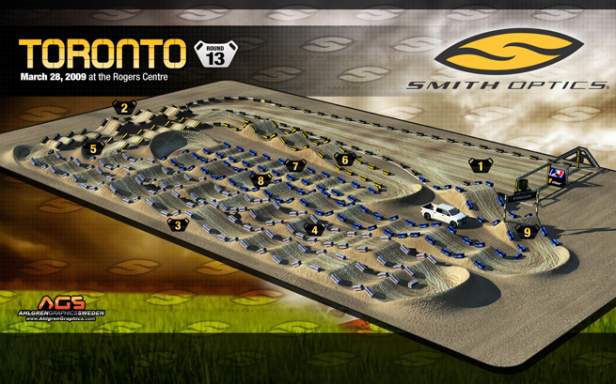 1.) The inside set of gates is going to be more suited for this type of start. I think, with that double straight out of the turn, having a good inside run and then having another left-hander, it will be good to have control of both insides of those turns and kind of avoid getting pushed out of the outside over those jumps.

2.) It’s going to be difficult to tell, but I think if you double those first two, and then use that third big one to jump all the way over those whoops will be fast. Or it might be possible to triple, or even single-double, then blitz through the rollers at the end. Maybe even off the start, that’s an option to do it that way – roll it, double, and then blitz out.

3.) I think this section depends on section two, whether you jump all the way over those rollers and hit the outside, or not. If you do, it will be possible to do that first little triple on the outside so that you go triple, then hit the big triple and try to stay really low. If you go inside on that turn, you’re basically forced to roll the first one, then double, then triple. Unless you pull off something spectacular and double, then double over the first jump of the triple [laughs]. Then, after the triple, it’s basically going to be a triple onto the table, then bounce off over the jump into the turn. But the Toronto dirt is normally pretty soft, so by the end of the night, the ruts might be pretty gnarly into the face of that first jump after the triple and cause a bit of a G-out, so it might turn into a double/double thing for a lot of guys. But the fast way will be to triple onto the table and then bounce over the next jump and into the turn.

4.) Everyone is going to rail that turn, and then it’s just about jumping onto the dragon back, then skipping down. And it looks to me like if you can get a good enough drive down that dragon back, you may be able to go triple in the middle, then triple onto the next table, and then bounce off again. That’s going to be the absolute fastest way. Section four is going to be a section where you can make up a lot of time on the track if you can pull those rhythm sections off. Otherwise, it’ll be a double, double, double, on/off. And on a 450, those guys will probably jump over the dragon back altogether, then triple, triple onto the table, then bounce over the last jump and into the turn.

5.) Depending on how you get over the on/off, the right-hander will probably end up with the inside being quicker, because that’s a short section of whoops or rollers or whatever, and it will be easy to wheel-tap or just jump through them from the inside.

6.) You’ve got to jump the triple. That’s the fast way, and land with the throttle on. [Laughs]

8.) There are nine jumps in this section, so the fastest way will be to triple all the way through, but it’s not going to be that easy – especially the last three. So the key is going to hit all the low ones and avoid the bigger, steeper ones, so you stay as close to the ground as possible.

9.) That last corner is going to be a good one. I like to see an open turn like that before the finish line, especially with the finish-line jump being as big as it is here, so you pretty much have to go to the outside to jump it. If someone needs to make an inside pass, there’s an option there. This should be a good turn if there’s a battle to the finish.