This week’s Smith Optics Track Walk is brought to you by former pro Matt Walker, winner of the 2002 Houston 125 main. Matt has recently started the Matt Walker School of Moto-X and can be reached at MattWalkerRacing@yahoo.com.

Hello everyone. It’s been quite a while since the SX tour has been back in the N.O. From the 3-D picture, this track looks to have some different sections and obstacles than what we have seen in the previous rounds. Before I break the track down into what I think the riders will do, I must say that the dirt in New Orleans has always been awkward for the riders and will be a factor on Saturday night. It’s a gumbo/clay mix that is notorious for having large chunks of debris hidden beneath. What I’m trying to say is that the dirt is hard to read. It’s a weird color, and traction is always a problem. So, if Bubba doesn’t do the rhythm lanes just how I’ve typed it, don’t blame me. Blame the dirt... Here we go! 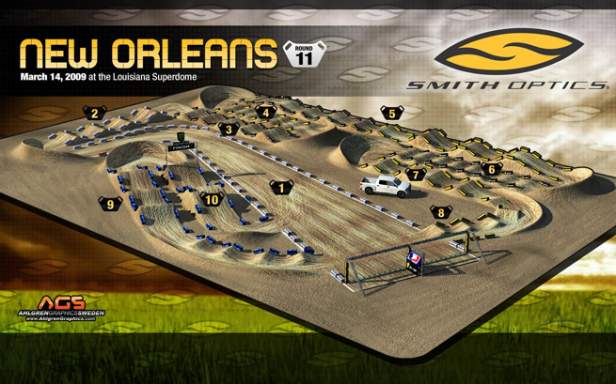 1) The start looks to be the same distance as Atlanta, but what’s different is the immediate right that follows. This should be a real clean first and second turn. I like that the second turn has a big bowl on the outside. This most definitely seems to be the best start package this year.

2) This is going to be a hard shot to call. It looks like the track should go the other way! I honestly think guys will go three in, then roll the ant hill (depending on its steepness).
If the fourth one is mellow, well who knows? 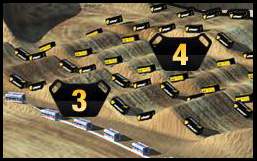 3) The top 450 riders, and maybe a couple of 250s, will go triple-double in this section. The basic way is double, double, single, although the turn before is awfully close.

4) This is the first set of whoops. They're not that long, which normally means that these will be the bigger set. From past experience, look for the whoops to have that "Cow Path" look, which, in turn, means that this set will more than likely be jumpers by the main.

5) This next section seems kind of retro. We’ve got a dragon back over a single, then they will triple, then jump hit the big triple. I’m pretty sure every rider will do the same thing here. If the dragon back is gnarly, some riders may just elect to roll the back side then go two, two, triple. 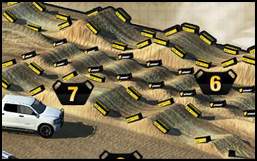 6) This second set of whoops will be a little smaller than the first set. This could be where a lot of passes are made because of the big right-handed bowl before followed by a left-hander after. This will be a spot to watch for sure. Someone will get knocked down in this section. Mark my words...

7) Now you’ve got a basic on/off over a single, or downside the table and roll the single. Riders will most definitely try it both ways. They will choose one over the other based on how it sets them up for the next section.

8) This next section is moguls! Turning moguls, at that, with an outside sweeper option. This is where the mechanics’ area will be. I would have to bet that they will hit the first mogul then sweep the rest. This is a very interesting section. I doubt many passes will be made here, but it’s still interesting. 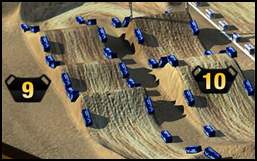 9) A turning 70-foot steep triple. This new wave of triples is no joke. They're big. At 7:15p.m., whoever is sitting beside this massive triple will see the drain plugs from the #7 bike and the #1 bikes. I guarantee it.

10) This finish-line jump looks to be cake, but what I like most is the next two turns following the finish. This is where you will see riders try an outside-in technique. It’s where they will drift wide in a section, then cut underneath in the following section, to make a pass. This track looks to be all about setting the rider in front of you up. Although most jumps are basic, I think the old-style flat turns will make for more passing and better racing.