This week’s Smith Optics Track Walk is brought to you by the 1985 125 National Champion and the winner of eight 250 supercross races. Ron “The Machine” Lechien walks you through the track we’ll see in Indianapolis, Indiana inside Lucas Oil Stadium. 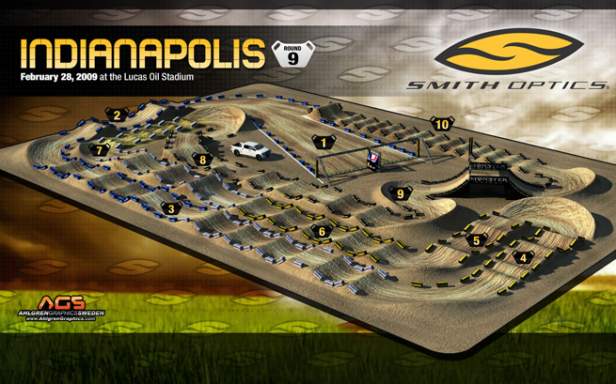 1.) I think that next to the box on the left would the best spot. I think there is going to be a push to the left and you’d hate to be on the inside. If you get the jump on the guys, you can move over and box them out. I always liked being next to the box for some reason, and this weekend if Lawrence is on the other side of the box I could kick it and jack with him.

2.) Looks like a little step-up and over to me right here. I’m thinking you should be able to get over that first lip, depending on the size, and then all the way over. Not off the start, but the laps after that. It’s hard to tell by the look how far that gap is but maybe the guys could wheelie up and then go all the way over. That would obviously be the fastest, but again, I’m not sure about that lip.

3.) I think this is going to be a step-all-the-way-over that tabletop and then double instead of the on-off. I think if you could step all the way over that table, you’d have a better rhythm for the next set of jumps.  You would then double the next two jumps and then triple. After that, the triple all the way over the tabletop would be the hot line. Who knows though, maybe the guys will step on and off and stay lower. Back in the day we didn’t have the combinations like they have now. I was thinking the other day about how in Tampa 1989, they had a step-off and only Bayle was doing it and I was like, “Man, I don’t know about that,” and it had a lip on it! Now they just step off a flat tabletop. 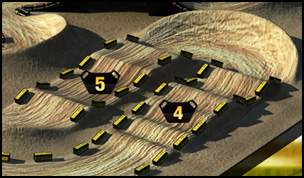 4.) Looks like a dragon-back where you jump up to the top one and then double into the turn. I remember we had one at the Kawasaki test track in ’89, but it was the opposite where you jumped onto it and then had whoops going down the back side. It was crazy back then and Jeff Matiasevich was really fast on it. He was just coming up and rode that good. I had some trouble with that thing, it was pretty gnarly.

5.) Looks like the big bowl turns are back which leads you into something I’m not sure about. It’s hard to tell the distance but I think the guys will end up going outside and seat bounce that thing all the way over the single. I wouldn’t think they would make the guys go over a table and then just have a single but maybe.

6.) The next section is five jumps and I think its double-triple and then hit the big triple. I think it looks too tight to hit the triple coming out of the turn but maybe. I’m thinking double and triple out is going to be the move and then do an old school no footed whip off that next triple. The triples now are all about the same size but in the old days they varied every week because there were different guys building the tracks. The triple could be completely different week to week, you didn’t go out and triple first lap back in my day that’s for sure. 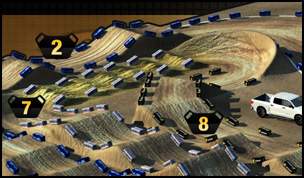 7.) A cool sand section, we had them back in the day. I would think you’d go outside and try to fly are far over it as you can. You definitely want to get over the back and try not to get bogged down by it. This weekend in Atlanta the sand was cool, it was giving the guys fits. This one looks long and tough.

8.) We have an angled tabletop here where you’re going to kick the bike out to the right to set yourself up for the next section. That would be good for me because I always liked kicking it to the right for some reason. That looks like a cool obstacle and looks fun. It shouldn’t be a big deal for the riders. This is interesting, I was thinking you could hit the little kicker thing on the right, triple, and then go all the way over the tabletop. Who knows how far the gap is? I wouldn’t think that would be the fast line because you’ll be in the air for a while. I think it might be hard to get inside of that kicker jump. Because of the way you’re set up after the corner table, it might be hard to get down to the left side. That bowl turn before that tabletop is going to set you up to go to the right, I guess we’ll see. 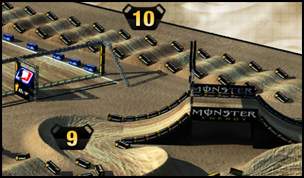 9.) This section looks one lined to me but maybe the actual arc of the corner will be different when they design it. That finish looks cool to me, a little old school where you can cut under somebody that takes the berm to make it over the finish line. You’re not going to want to be off in the turn I think. You should just go inside to inside here if you can. The over-under bridge coming back is cool. In Europe they used to put a step before the finish tabletop and you’d go all the way over.

10.) Next section is a long set of whoops and they look like they vary in shape a little bit as they start off smaller and then get big. I guess the guys will be skating those, go around the bowl turn and get a run going towards the wall. That wall looks like what they had last year a few times and Villopoto and Grant are not liking the look of that thing. They are going to have a rematch on the wall.

I’m liking the look of this track for sure. I wish it was live again, as it’s pretty cool sitting in your living room watching Supercross live on SPEED. I’ll be watching to see how well I correctly predicted what the guys will be doing.