The San Diego Supercross is the last stop on the western tour before the series heads back east, and we had former East and West Lites Champ Grant Langston walk us through this year’s track design for this week’s Smith Track Walk. 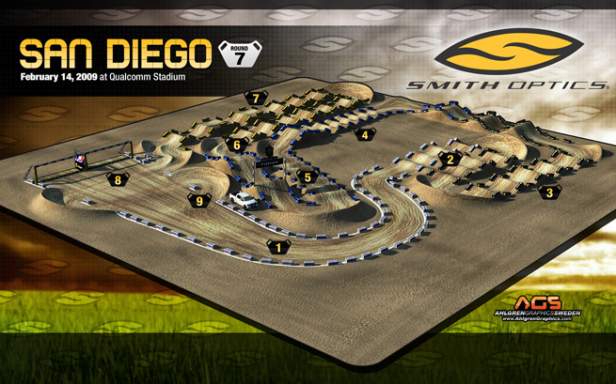 Click Image for Wallpaper
1.) “Well, the interesting thing is, I think the start is kind of generic in the sense of the way it goes. One, it's pretty long, which San Diego has always been known for. Then, it's got a sweeping left into a right, so it gives guys a chance to funnel down. I think during the race, it's going to be an area where you can't pass because if you commit to that, I think that’s where you'll see separation between some of the guys. It’s definitely a unique entrance into a supercross track, let's put it that way. [Where you line up] depends... If you are playing the conservative route, I think near the inside you're going to be okay because you can hug those bails all the way around and come out all right. The thing is, on the outside it's a little bit of Russian Roulette; if you get a good jump, you're going to have a huge holeshot because you can hold it on way deeper into that first turn. I don't know man. I think you could holeshot from anywhere on this gate. I might lineup next to the starter’s box. That way if I didn't get the greatest jump, I have some room to one side to move over.”

2.) ”This section looks to me, with being a dragon back, it's almost like you're going to jump double-double because between jumps two and three basically it looks like a banana back. So, it's not complete; it's sort of a bowed-out dip. So, that looks like its going to be the fastest way. Then coming backward off the next turn is going to be a little interesting because you are jumping up onto a backward dragon back. You might see guys try to do the same thing, sort of hop on and hop off or maybe go triple then single into the turn. But it will be kind of interesting because it's hard to skim whoops downhill. A reverse dragon back is a little more difficult than going up it. That one might bring a couple of different options.” 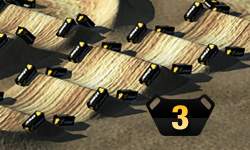 3.) “Looking at the track map, it looks like the third one is the tallest of them all. If that is the case, I think you are going to see guys going double-triple here. If they're all the same height, you never know. Triple-double in theory is always the quickest way to go. They have a massive berm like you said. So, you've got to be able to come in with some speed. It'd be hard if they go from a three-foot jump to a five-foot landing or something along those lines. Same thing there, depending on how it comes out in reality, it may create some options. I think double-triple will probably become most generic, or you may see guys double-double-single, running the hay bails on the inside for the triple afterward. But I think the 450 guys are either going to go triple-double or double-triple there.”

4.) “Those have always been tricky because if you don't come out of those whoops correctly, you are not even going to get that step-up dialed in. So, I think there’s a lot of it that’s going to be momentum. If a guy makes a mistake, it's gong to cost him because we always see stuff happening in the whoops, but in this instance, with an obstacle afterward, if there is no momentum, you are passing an opportunity right there.”

5.) “Same thing there. If you roll that step-up and then you got to try to get your speed again. It's almost like one bobble can cost you those whole two straight-aways worth of your momentum. I like the way it's laid out with some 90s. You’ve got that first straightaway, whoops into a step-up, a 90 into more whoops. What's great about that is you can go inside, outside; it's really going to create, I think, a ton of passing opportunities, which I think some of the guys have struggled with this year whether it's been the layout or the mud that we've had. I don't see there being any excuses to get around guys there. If you're fast, then you're going to make a pass between the triple and the finish line. I think that section’s great; definitely going to separate some of the guys.” 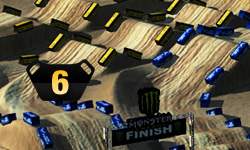 6.) “Yeah, well, I looked at this section pretty carefully. What can you do because there is only a minimum of two options, which are obviously inside and outside. The outside might be a little slower going in, but it looks possible to go triple-triple, which could be the fastest way to go. Going to the inside, you're only going to be able to go double in and then I think you can go triple-double. But now, you're going to be landing in that rhythm section twice as opposed to going to the outside, where you'd be landing in it once. That's where you're definitely going to see the team managers with stop watches and timing guys that are doing it inside and outside to basically be able to tell the guy, ‘Hey, we feel the outside's the way to go, a triple-triple.’ Or maybe they'll be telling otherwise. That's definitely going to be a section where I think they're going to try hard to make both lines as even as possible in a sense to create some different options there. That might be the trickiest part of the track I think.”

7.) “Personally, I think I would go triple jump from the first table-top, land on the second one, and bounce off the little step-off into the turn. The one thing that obviously is going to be important to see is how steep the face of that first tabletop is. If it's really steep, and shoots you to the moon, you may be better off coming out of the turn sort of soaking it up, double it, and jumping on. Jumping from tabletop to tabletop, you've got to have a lot of forward momentum, which is crucial. If you triple and you hit the first tabletop, if it's shooting you way up and you're not getting much forward trajectory, it may be slower than going double, step-on, step-on, step-off. I think if the tabletop is just a generic tabletop, the fastest way is going to be triple, jump on the first one, onto the second one, off, and then set yourself up for that little twisty-windy afterward because that's a long section that comes up after.” 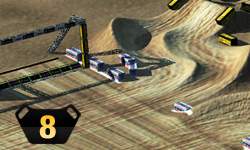 8.) “The thing that I think people sometimes forget about with supercross bikes and supercross tracks is when you’ve got a flat, motocross-style section with some chop on it, the bikes don't have it so good because the suspension is so rigid. So, sometimes you think it's a good time to relax, but everyone comes into those switchbacks so fast that they blow the berms out. So, you have to be careful you don't go too high because it will eventually break away. You'll see the hay bails forming at the top and the track crew trying to put them back in place. You would think it would be a place to relax, but I think if you relax in that section, you are going to get passed because there's definitely a lot of potential between those turns to set a guy up. I think if you hold it on a little bit longer, it's definitely one of the easier spots to pass somebody.”

9.) “I think [Stewart and Reed] have both elevated their game. I think in the beginning Chad looked more comfortable and stronger, but I think the San Manuel team has that bike dialed in. It's going to be tough. I think they're going to be close. I think a lot of it is going to have to do with the starts. I think Chad needs to get out of the gate. I do think it seems like he's got those switchbacks, flat turns dialed, so that long section up front might suit Chad a little bit. They got those 2 whoop sections, which I think might be in Chad's favor, but then they got 4 technical rhythms where James has always been so phenomenal. I don't want to sound like a politician here, but I think it's going to be really close battle. I think a lot of it's going to come down to the start. I hope if one gets a good start, the other one does. If one gets a bad start, I hope they both do because I think that's going to create some awesome racing for everyone. If I was a betting man, I think I am just going to keep my money in my pocket for this weekend.