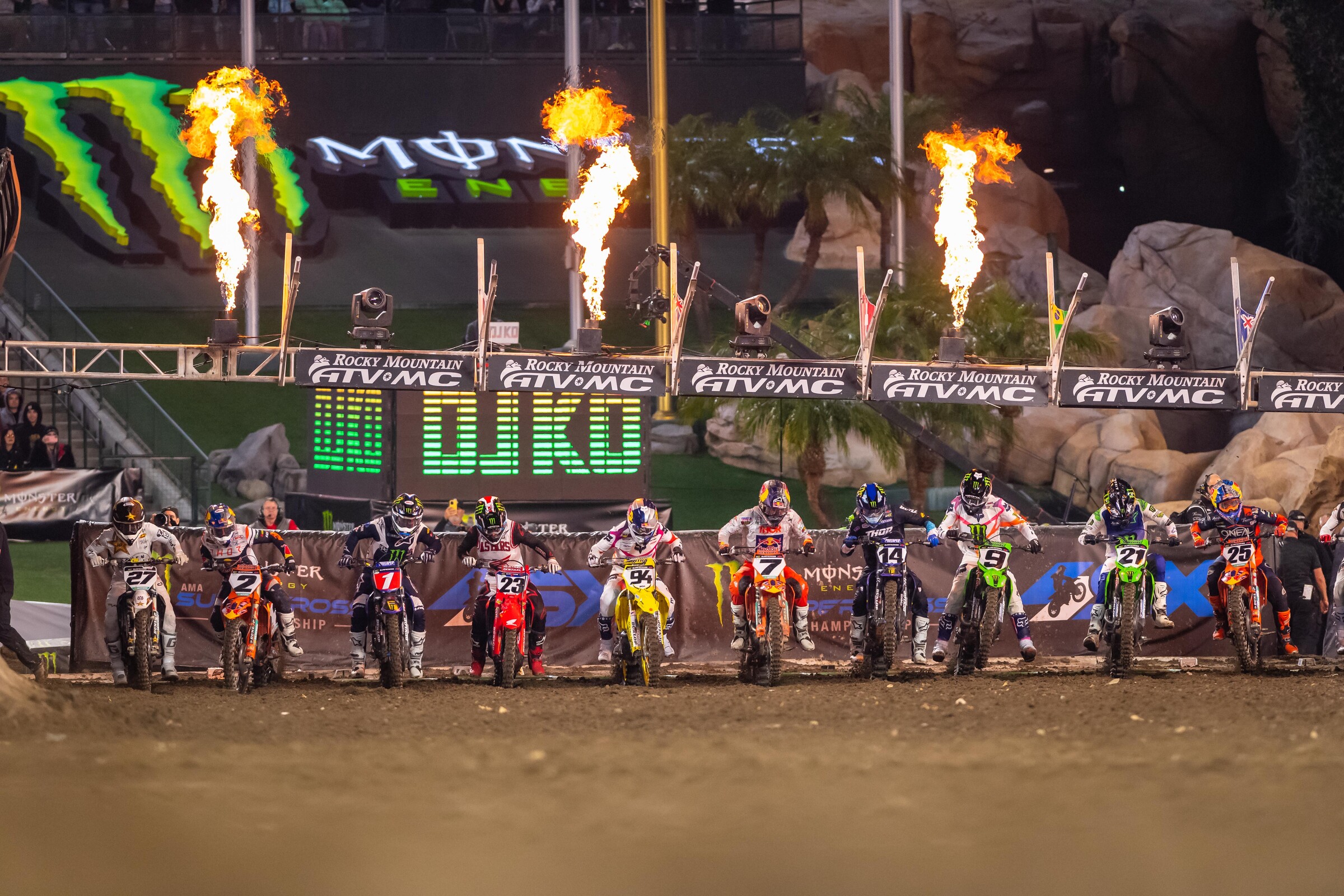 Plenty of riders will tell you that the goal of Anaheim 1 is not to thrive, but to simply survive. The first race is always accompanied by uncertainty and jitters, and the outcome isn’t always indicative of how the rest of the season is likely to play out. This time, however, some of the results sure seem like they could be a sign of things to come in 2023. Let’s get into the first Saturday Night Live of the season and break it all down.

The 450SX main event was, in a word, bananas. Honda HRC rookie Colt Nichols kicked it off with a holeshot, but Justin Barcia quickly took over the lead and attempted to make a dash for it. Eli Tomac wouldn’t let him go, however, and would eventually take over the lead when Barcia made a mistake on the tunnel jump going into the whoops. Barcia would hang in there, but a mistake in a rhythm lane resulted in an off-track excursion and crash. At that point it looked like the champ had this race firmly in his grasp. But then Tomac went down all by himself on the tunnel jump when he, in his words, got too far back on the seat!

Tomac’s misfortunate was Malcolm Stewart’s gain, and the Rockstar Energy Husqvarna Factory Racing rider took over the lead with the crowd absolutely loved it, roaring their approval as he circulated the track. It soon became apparent, however, that Chase Sexton was catching Stewart. Sexton eventually  threw a block pass on Stewart in a 180-degree lefthander that bumped Stewart off the track. Stewart didn’t lose much time, but he did lose the lead. He continued to put in a strong ride, but would unfortunately suffer a tremendous crash later in a rhythm lane. We weren’t able to confirm what happened, but it sure looked like he hit a false neutral or somehow lost drive, because his front wheel took a big and sudden dive, sending him over the bars hard. The good news is he eventually did get back on his motorcycle, so he appears to have escaped the scary crash without injury.

Back up front it was all Sexton, but the craziness of the night was far from over. Tomac had regrouped and was coming on incredibly strong, and the crowd, which hadn’t been quiet for seemingly the entire race, somehow got even more raucous, reaching biblical levels as Tomac closed in on Sexton, and they absolutely exploded when Tomac moved back into the lead, this time for good. Not long after, the checkers flew with Tomac recording his first ever 450SX victory at the season opener.

“I guess I just needed experience,” Tomac joked afterward. “This is my tenth round one, apparently it took ten times to finally figure out how to get to it right at round one! Overall, a wild race. Early battle with Justin [Barcia] there, then I got too far off the back of the seat of my bike and crashed on that tunnel there. Luckily everything on my bike was straight.”

Riding to a relatively quiet second place was Cooper Webb, who didn’t look especially impressive at any point during practice, but, as he does, turned into a sneaky assassin deep in the main event.

“The start was not good me and Malc [Malcolm Stewart] got into it. I wasn’t too bad, I was behind Chase [Sexton] and I kind of stalled it,” Webb said afterward. “I put my head down, but I saw up ahead of me there was a freight train and luckily no one was really getting away. It’s tough because it’s A1 and everyone is feisty. I was battling with Dylan [Ferrandis] and we came through together, I got around him, got around Kenny [Roczen]. At the end I felt really good. The track was insanely rough but I found some good lines. I was just hoping to get a top five after that start.”

After leading five laps Sexton would end up third on the night.

“I actually overjumped the quad into the corner and it shifted to third, and I didn’t realize it,” Sexton said. “I had no drive and then it messed up that entire rhythm lane. It felt like it went on forever. I never really found my groove until the last lap when Cooper got me and I changed my lines. Overall I wish I had ridden a lot better the last ten minutes of that main event, but we’ll take what we learned and go to round two.”

Riding to fourth was Dylan Ferrandis, who was able to recover for a solid finish following a bad start.

“In the main event I had a bad start, I banged bars with AC [Adam Cianciarulo] and had to chop the throttle. I just worked my way up and felt like I had a shot at the podium. At one point I thought I was third, but a little mistake cost me my shot. I passed Webb but he passed me back. I’m just happy to be in the mix and I have a shot for this championship. It’s good to finally have this feeling.”

Fifth went to Ken Roczen, who was spicy in his debut on the Suzuki. He immediately put some moves on Tomac early in the race but wasn’t able to get anything to stick permanently. Still, Roczen was strong at the opener before eventually losing ground due to small, but multiple, mistakes in the second half of the race.

Fastest 450 rookie of the night award goes to Colt Nichols, who notched sixth on the night. The Honda HRC rider got out of the gate well, but quickly got shuffled back a handful of positions before steadying himself. Afterward he told us just jitters definitely played a roll. But still, sixth place in a 450SX main is great, especially when it’s your first race!

If there were two things most riders seemed to agree on it was the difficulty of the track and the exceptional roar of the crowd.

“The track was probably top three on gnarliest I’ve ever ridden,” Tomac said. “The transitions there, if you weren’t absolutely perfect you wouldn’t get it. I honestly thought I had thrown it away and I would be lucky to get a podium. But the track, I guess, was so gnarly there was time to make up and time to be made. The triple-triple-triple was tough, the first ramp had a massive pothole leading up to the ramp. That was unbelievable. We started inside and then we had to just deal with it. When the dirt is like that it’s really easy to go short or long on those jumps. The crowd, you hear it and there’s nothing you can do about it except just focus. It’s part of supercross and that’s what makes it so cool.”

“For me it’s awhile since I’ve heard it this loud,” Webb added. “Maybe that’s because I haven’t been up there.”

The action in the 250 Class wasn’t quite as dramatic, unless you count the tremendous crash Austin Forkner experienced on the start straight immediately following the 250SX main event gate drop. It was extremely violent, with Forkner slamming into the ground while his bike bounced end-over-end rapidly. Forkner didn’t rejoin the race. Look for an update on Forkner’s condition in the upcoming week.

Up front it was all Jett Lawrence, as the Honda HRC rider led every single lap without challenge. Afterward Lawrence admitted his main goal was just go get through A1 unscathed.

“It’s always nervous before the first round,” Lawrence said. “The big thing today was, how was the track going to form up for the main? I just didn’t want to die. The joke all day was, ‘I just want to see Sunday.’ There’s always so much hype before Anaheim 1. Just made sure I really focused on the main and really did what I needed to do. Just do my laps. The biggest mistake would be to try to show it [speed] the whole day. To be honest I would have been happy with a second or a third, I just wanted to make it through safe. I just knew tonight with the main event, it was like ‘Whoever makes the least number of mistakes is going to win.’”

Second place went to RJ Hampshire, who’d been speedy all day and won his heat race over Lawrence.

“It’s building, really. Each manufacturer will go through it, and we went through it last year,” Hampshire said. “I knew my speed was good coming in, yeah I was a little bit worried, I didn’t know how my bike would be in the whoops, I knew it was good everywhere else. They did a huge engine update after outdoors and my starts were good.”

Finally, in third was Cameron McAdoo, who held second most of the race but handed the spot over to Hampshire late after developing arm pump.

“I made a really big mistake in the rhythm after the mechanics’ area,” McAdoo said. “I messed up my elbow a little bit and then I got arm pump. I didn’t feel like I executed toward the end.”