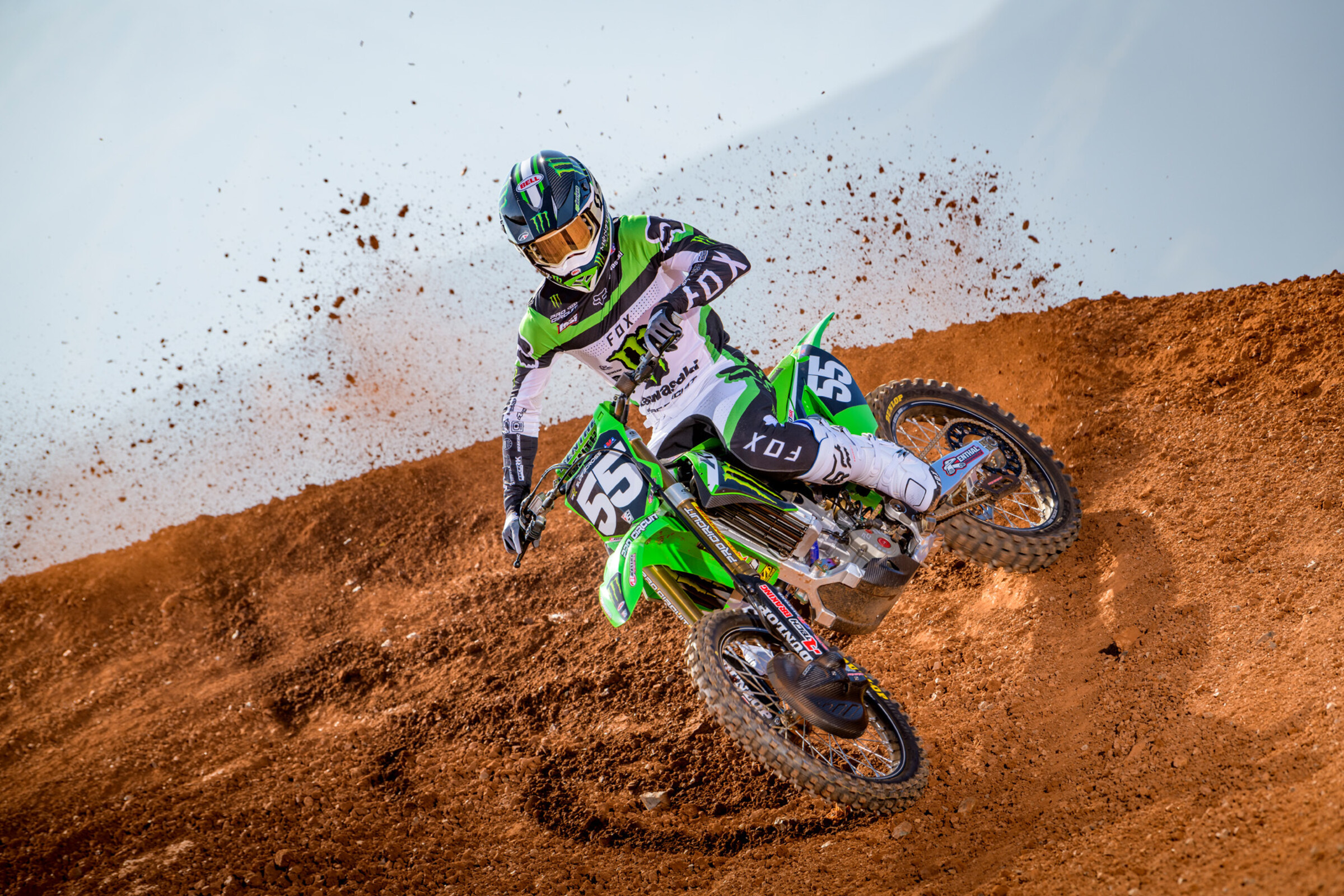 Monster Energy/Pro Circuit Kawasaki team rider Austin Forkner competed in six races in 2022. Yes, the veteran 250cc racer out of Richards, Missouri lined-up for five 250SX East Region Supercross main events – he won the Foxborough round last April – and one Lucas Oil Pro Motocross Championship National before a shoulder injury forced him to call time on his season and head on over to the local surgeon for a badly needed reparative procedure. A star-crossed racer with sensational speed who has not been able to escape the window of bad luck and healing body parts, Forkner, poised to launch his seventh Monster Energy Supercross Championship racing season this coming Saturday night at klieg-lit Angel Stadium of Anaheim, California, desperately wants 2023 to be his breakout championship in the classification. Forkner and his team are now breaking in their race bikes and putting the finishing touches on what will be their 2023 racing programs. Taking a breather and waiting out some rain on Monday morning, we tracked down the 24-year-old charger and got his take on what is about to come.

Racer X: Austin, how are you, my man? It’s been something of a rain-lashed week here in Southern California, hasn’t it?
Austin Forkner: Yeah, this week has been rainy, but not as bad as what they were calling for. At the beginning of the week, they were calling for big rain and everybody was freaking out and saying, ‘Oh, we’re not going to be able to ride this week!’ I was much more like, ‘I guarantee you that we will ride almost every day or every day that we planned on!’ And then we did ride every day for five days. When they say it’s going to rain in California, it doesn’t mean it’s going to rain. In Oklahoma they’ll say there is a 20-percent chance of rain, and then it’ll flood.

So, it’s true that you will be racing in the 250SX West Region?
Yeah. Yeah, they already announced that I’m West Coast.

Good for you. I know how keen you are to simply get out there and get back to racing.
Exactly. I’m good. I’m ready. To be honest, I didn’t really care which one I did. It wasn’t really a huge difference. I wasn’t really stressing on it, whichever coast I did, I was like, ‘Whatever. I’m ready now.’ To be honest, though, I probably prefer the East Coast tracks a little bit. I’ve just always liked that dirt better, but still it was good news to go West, I guess. I’m ready to go. I don’t even know 100-percent know who is racing on this coast or the other coast, but to be honest, I don’t really care. I just have to show up and be better than everybody else that lines up against me.

You’re a fighter and I know you put absolutely everything you have into your racing. Have you had a good off-season?
Yeah, I honestly feel like I’ve had the best off-season coming into this year that I’ve had just as far as being low key. It seems like it has been really easy-going. I mean I have hardly even fell at all during this off-season. I’ve been riding pretty much nonstop for the past four months, so that has been really solid. Yeah, I came off of an injury from the outdoors, but I’m fine now. I’m ready to go. It just seems like since December hit, I was good fitness-wise, and the bike was good. We made a couple of bike changes and for whatever reason the past couple of weeks my intensity has really come up on the bike. Everything has come together kind of at the right time and I’m going good right now at the practice track. I’ve got a new off-the-bike trainer with Charles Dao. He’s worked with Broc Tickle and Justin Brayton and Vince Friese and the Hill brothers. He’s worked with different guys throughout the past 10 to 15 years. It has been really good with him. Robbie Reynard is still my on-the-bike-coach, and he was just out here this week and everything is good and he says I look really good. Yeah, this off-season just seems like it has gone by relatively quick, but relatively stress-free.

In the past year or two after something bad happened, I’d get real negative for a couple of weeks or even longer. This time that hasn’t been like that. Once I healed-up over this past summer, I was back on the spin bike and doing normal things like that. I never had that kind of negative period. I guess I’ve made the decision with myself that, “Okay, look, this is what I do. Quit having that mindset of, okay, if something does happen, take it on the chin.” Basically, I don’t want to threaten myself in saying things like, “Oh, I’m done!” I don’t have that mindset now. I’m not going to do anything else. This is what I’ve been doing my whole life, and this is what I’m good at. If something bad happens, just get back in it. Even with this whole recent year not being a great year, obviously, but I feel like everything has been more fun and this whole off-season I’ve kind of found that fun again riding the bike. It’s been good. I don’t have that “I don’t want to be here” type of attitude. It was definitely getting to that point in 2021. This year has been solid.

You’re not the first racer who has told me just how tough the injuries and ups-and-downs can be in this sport. And not only is it an unforgiving and brutal sport, but you also have to do so much to simply keep from getting hurt, huh?Yeah, exactly. I think all of that just really got to me in 2021. Even though all I did that year was break my collarbone and just had a few nagging little injuries where I jammed my thumb or whatever, it was probably the hardest year for me because it was more of the mental-side. Once I got through that and found that fun again, that was kind of the change. It was good to have that motivation to wake up every day and go to the track and enjoy it.

So just how is doing laps and motos with Jason Anderson?
Yeah, we just kind of link up. It’s usually with Nick Wey’s guys like Adam Cianciarulo, Jo Shimoda and Cameron McAdoo, they kind of do their program and me, Jason and Seth Hammaker are all kind of on our own program, but we all kind of link up. It’s kind of like our group and their group. Sometimes we don’t meet up intentionally but we’ll be at that track riding at the same time, but me and Jason have intentionally gotten together. If we are doing sprints, it’s not as important and we’ll just kind of do our own thing that day. However, pretty much any day that I had a moto or that he had a moto, we’d go over to each other and just kind of link up. It didn’t matter if I started first or if he started first or whatever. If I was in front of Jason, I’d be pushing to not let him catch me and he would be pushing to try and pull away from me. Basically, it was great to just have something to chase so you just don’t get bored. We weren’t out there just clicking off our laps or that type of thing. It’s an incentive to push and to try and go fast.

Anaheim 1. That’s a big race. You still get excited to race inside Angel Stadium?Yeah, but I haven’t raced there since 2020. In 2020 I rode good. I led 10 minutes of the main until I hit a Tuff Block and ended up getting third or something like that (Note: Austin was fifth in 2020). I’m as ready as I can be. Mitch Payton called me, and he said, “Are you good?” I knew what it was about. I knew why he called me. It was the day before Christmas. I said to Mitch, “Yeah, I’m good.” Mitch said, “West Coast then?” I said, “Sounds good to me I’m as good as I can be.” Whether I come out and absolutely dominate and win the first race, or get third, or get fifth, or get whatever, I’m ready to go. To be honest I don’t feel too much pressure. Even with everybody saying, “Oh, this is your year! You’ve gotta make something happen this year! This is your last year on the 250!” I also read on Instagram: “Oh, if you don’t win something this year, you’re going to lose you’re ride for next year!”

Whatever, you know? I don’t feel pressure, really. I’ve been at the highest and kind of the unbeatable guy like back in 2019 and even 2020. I was beating Dylan Ferrandis before in the supercross series before I crashed at the last race. And I’ve been at the lowest of lows when I was either hurt and not racing or even worse than that, racing and just getting your ass getting handed to you. That’s almost worse than being hurt and not racing. I’ve kind of experienced the highs and lows, so I’m just honestly happy to be at the races now. Man, just being at the races and seeing the fans and seeing people come by, I really enjoy all that. I just appreciate being at the races now. That’s been kind of a change in mindset. My goal is to win races and to win a championship. That’s kind of the last of my worries right now. It’s just take one race at a time and try to do the best that I can at each race and if I am good at each race and in the championship, then the last two or three races, then we’ll start looking at the championship. Definitely no sooner than that. I’m not worried about any of that right now. Anaheim 1, that’s the first race, so let’s go there and let’s see how we shake up.