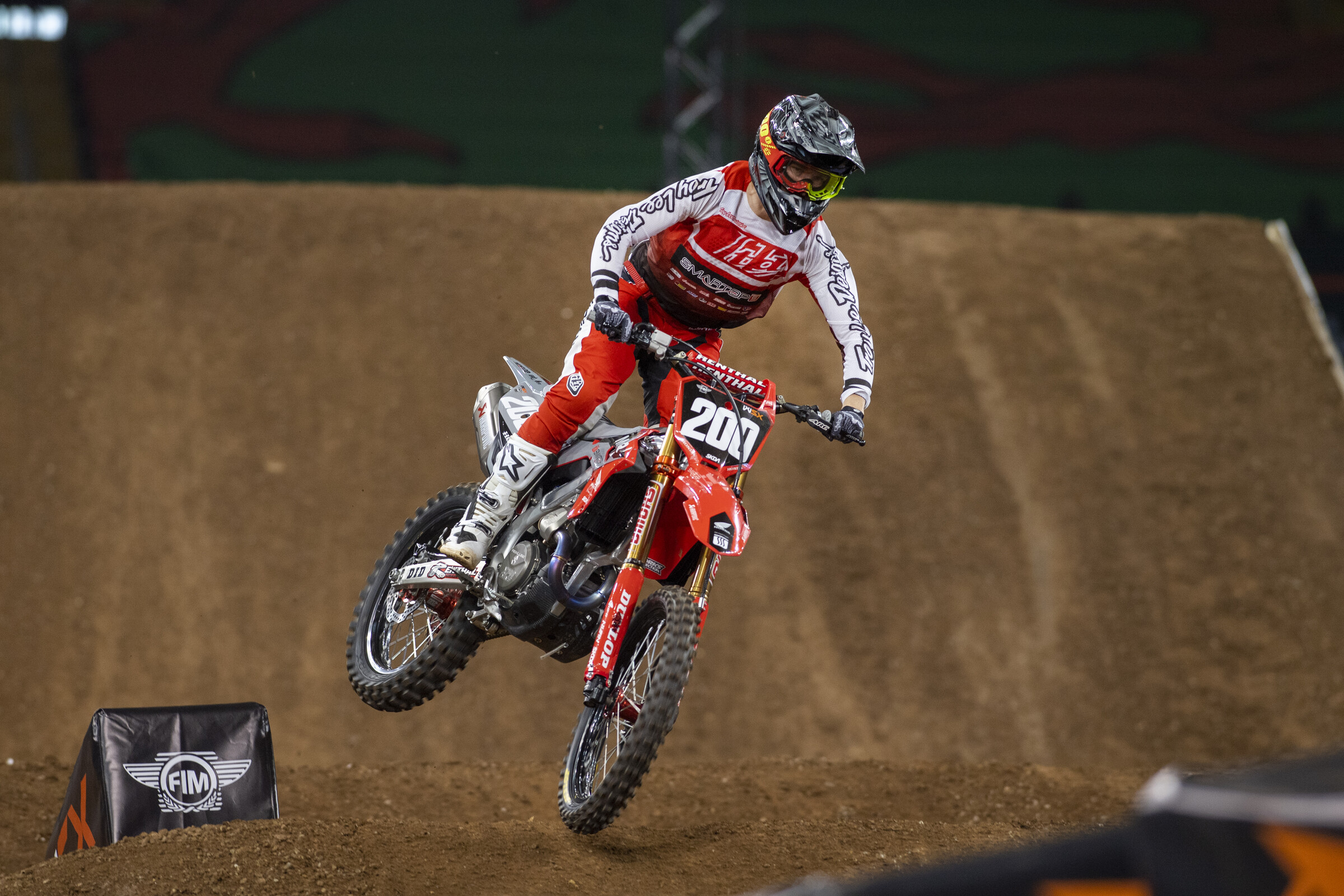 It’s been a while since we’ve seen Cole Seely in action on the track. The former Honda HRC rider retired in 2019 and, like plenty of other people, suddenly found just about any sort of opportunity to do anything evaporate in 2020. Well, the veteran finally got a chance to get back in the saddle and compete this fall in the inaugural FIM World Supercross Championship season. He had a bit of a hard time adjusting to the format and racing in the 250 class again (he went down in the first turn in all three mains in Australia), but he had a good time and was quiet positive about the whole experience when we caught up with him after he'd returned stateside.

Racer X: Just kind of give us your thoughts on the tracks and format in general. What you liked, didn’t like, what has potential, that kind of thing. And you have to say more than just the first turn for things you didn’t like.
Cole Seely: [Laughs] General impression is, it’s a great series. The hospitality is amazing, from the way they treat the riders to the way they treat the teams. They really do all they can to make sure everyone is happy. As a rider who’s been at this a long time, that’s really special. It’s really cool to work with the guys behind the scenes, and to see the way they work with my manager, mechanic, and everyone. I think everybody was pretty happy with how things were handled. There are a lot of moving parts with these things, especially traveling the world. There’s a lot more going on than loading up a semi-truck, which is no small task in itself. Boxing everything up, shipping everything, making sure everyone is happy, making sure every part gets there, every bike gets there, there’s a lot going on! It was pretty cool to see.

I think they’re going to go through some growing pains, and that’s probably happening right now with riders not being super happy with the tracks. They were fun tracks to ride, but to race, they didn’t really allow for a lot of passing, and as we saw in Australia, the first few turns were a little tight. [Laughs] It’s a learning experience though, and just like racers, they learn from every race. I think the guys behind the scenes, they want to learn and make it better. They also look for input from the riders and teams and having these first two out of the way and with us giving our honest feedback, I think it’s something they’ll apply next year. It’s cool. But it was a little tight, and it got the best of me, and a few other riders. I’d like to see a few more opportunities to pass. I think it was set up more like an arenacross where you really have to force the pass, versus like a supercross, where you can kind of be a little more creative and not have to force it. Speed matters more. I felt like I was racing guys who, in practice, I was a little bit faster than, but they had that racing dynamic down where they were ready to go saw off front wheels.

Why do you think they made the tracks and format the way they did? Was it to try something different, or to differentiate it from Monster Energy Supercross, or something else? What do you think?
I think it’s a cool format, it’s definitely different. I think they made it like that to keep it exciting. At a certain point in a normal supercross race it kind of becomes a little monotonous. There are some passes that happen late in the race, but the majority of passes happen in the first six laps or whatever. I think it’s cool and creative to cut the race after that point and line everybody back up again. I just think the track needs to suit that type of racing better. That style of track might be better for longer races, where it kind of tightens everybody up. When you want to see the fast guys actually make it through the pack, I think the track needs to accommodate that. Let us be able to set up more creative passes and square people up, let us go faster through the whoops or hit a rhythm section a little faster. The tracks didn’t accommodate that, but it’s a learning experience. They can take the criticism and be able to build better tracks that make for better racing.

Did you notice much evolution on the track from the first round to the second? Did they implement anything you guys had said from the first round at the second round?
I don’t think they had time for it. The track map was already laid out. It’s a big process to hold a series that races in England, then in Australia two weeks later. I just don’t think they had time for it. But I’ve spoken to the guys behind the scenes, and they’re very open to input from the riders. It’s not like they’re just, “This is how it is, deal with it.” Putting a track on paper can be completely different than how it is in reality. You can draw it, then when you see how it races you’re like, “Oh man, this didn’t turn out how I thought.” I think them alone just seeing how it played out, they can learn from it. It’s the first two races from a brand-new series and I think they did a phenomenal job. They want to do even better in the coming years too.

Talk about the travel aspect of it. At least for the American riders, it’s definitely not something you’re used to. One week you’re in Europe, the next you’re in Australia. You’re spending hours and hours traveling, the food is wildly different, and you don’t have your normal resources. What’s a whole season of global travel going to be like?
I think it’s cool. It gives us a little more time to focus on actually being there, if that makes sense. In my experience racing overseas, I loved going to new countries and I loved meeting new fans, but I was really on a time crunch. My focus was to get there as late as possible, and get out of there as quickly as possible because we’ve got testing and training to do for the upcoming supercross season. But if your main focus is that actual race, it lets you relax and enjoy it more. Going to Australia, we got there Tuesday and didn’t race until Saturday, so I had a little more time to adapt. We had a practice day beforehand so we could kick out the jetlag, loosen the nerves a little bit, and go for it. If racing it [the WSX] is the main focus, that makes it a lot more plausible than showing up on Thursday or Friday, race Saturday, and fly home on Sunday so I can get back to fulfilling my commitment to my team, which was preparing for, and racing, supercross and outdoors. But if your preparation is to get ready for the races overseas, it puts you in a better mental state for that long flight, which really isn’t that bad, and to kick off the jetlag and race. When we went to the UK, my wife and I stayed a few extra days because I wasn’t in a rush to get home.

I know what you mean, to a lesser degree, as a media member in terms of flying to whatever city just in the United States. My friends think it’s cool I get to go to some of the cities I do, but really it’s, get there Friday, work Saturday, leave early Sunday morning. It’s not like we have time to go sightseeing.
That’s the kind of thought process I used to have going to like, Paris. I’d get there as late as possible because I wanted to train and test all week, do my race on Saturday or Sunday, and get home the very next day. You really don’t get to see where you’re travelling. I’ve been to a lot of places in the world, but I really didn’t experience a lot when I was there because I was so focused on my job.

What was it like to be back racing? It’s been a minute for you. Were you excited? Did you get nerves? What was it like?
Yeah, a lot of nerves. I was really excited. I’d planned on racing still, I really wanted to call it a retirement just from American motocross and supercross. When I retired in 2019, I’d planned on going to Australia and doing their series, kind of following in the footsteps of Justin Brayton. But I had a gear conflict with the team I was talking to, and I’ve been very loyal to Troy Lee, and Troy Lee has been very loyal to me. I didn’t want to break the relationship we have, so it came down to, “Oh, we’ll just try again next year.” Then COVID hit. I really hadn’t planned on stepping away, and it felt really good to race in the UK and Australia. Not having raced for three-and-a-half years, there were a lot of nerves and all that stuff. I feel like my speed was there, but when I’d line up I’d get really nervous. In the heat races it really got the best of me. In my last three races, even though I went down in the first turn, that’s when I figured my starts out with getting out of the gate quick. If you watch the playback I was one of the first guys to the first turn, but I was just too far outside because I had a bad gate pick. I don’t know if it showed in the broadcast, but I had a little off-track excursion in my heat race, which gave me like 14th gate pick.

Was it weird being back with those animals in the 250 class?
[Laughs] Yeah, it was! It’s definitely different, and not what I’m used to. The 450 class has a lot of race etiquette the 250 class lacks. But I was lining up with a lot of guys I was used to too, like [Shane] McElrath, [Justin] Bogle, [Mitchell] Oldenburg, just guys I’ve been racing for a lot of years. Everybody was hungry, and everyone knew how short the races were. The biggest wakeup call was in the UK. It was like, “All right, where am I going to pass someone?” I’d be looking for opportunities and trying to set people up, and all of a sudden someone is coming to make a pass on me in the same turn! It was like, “Holy crap, how do I manage this?” It was a big learning curve, and it was a disappointing two rounds for me. But at the same time I learned a lot and I feel like I progressed a lot, even though I didn’t get to show it, especially in the last round winding up on the ground in all three mains. Showed a lot of speed, in qualifying I was right there, and almost qualified fastest in Melbourne. Fast lap times are something I always lacked in my career. I felt spunky and my intensity was up, so I’ve got to take the positives. We learned a lot I’ll be able to apply next year.