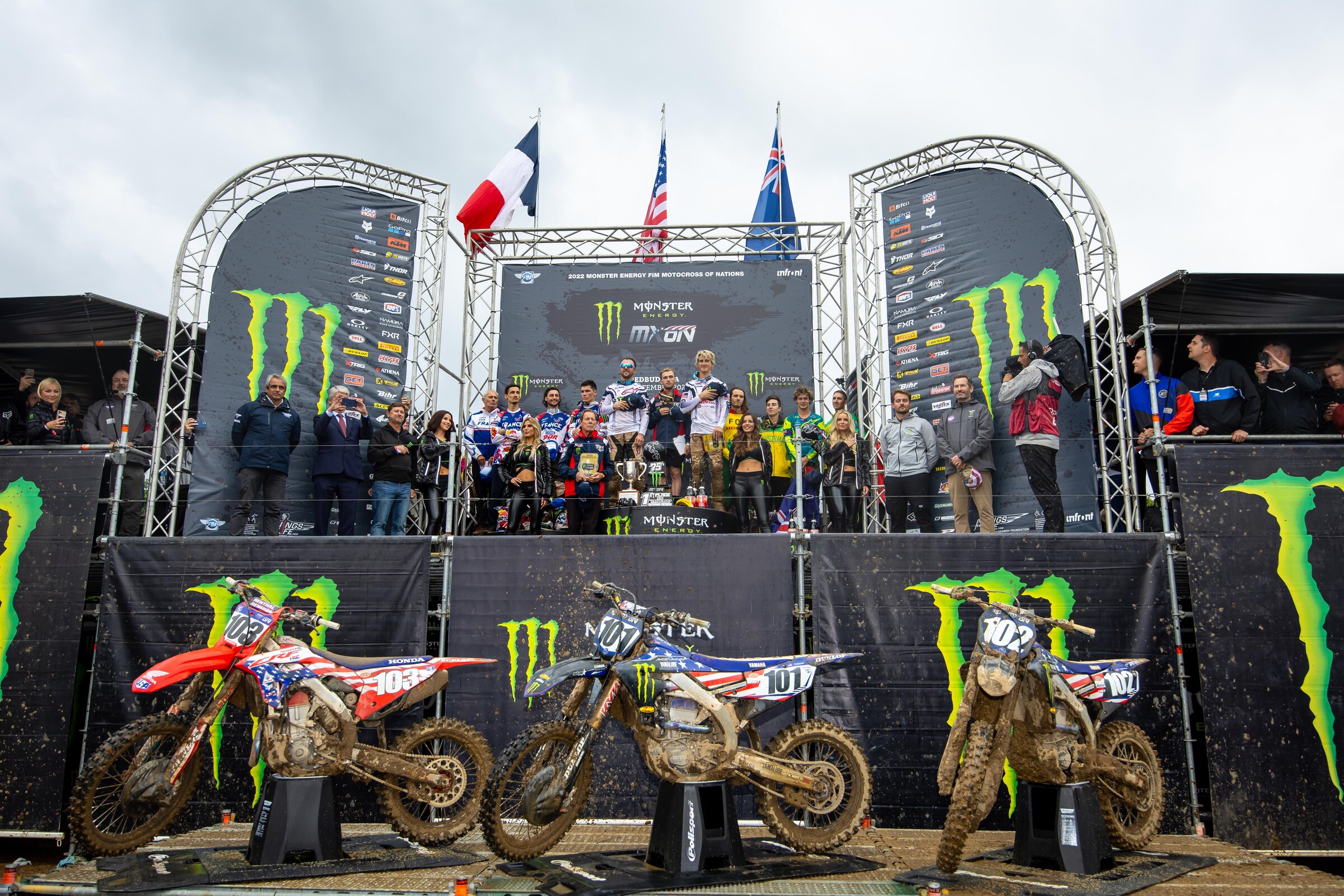 Well, the streak is over! Team USA won the MOTOCROSS DES NATIONS this past weekend and they did it in style. There was inclement weather, there were obstacles, there were things happening that’ve stopped previous Team USA efforts at this race, and then there is the luck factor, but this time USA managed to avoid the negative side. All three riders rose to the occasion and put in some great laps to get it done.

For example, early on it looked a lot like some other MXoN’s, when Team USA couldn’t get it done. Saturday’s qualifying effort went great, the crowd was into it, and USA should’ve probably swept all three heats except for a late Chase-Sexton-brain-fart. That was all good, everything was good, and everything was in fact, great.

But then the rains came and like so many other years, things could’ve went sideways for Team USA. Justin Cooper won a qualifier at Assen in 2019. The team looked good on Saturday at RedBud in 2018. Then next day the conditions ruined the team. How was it this time? Not as bad as Redbud 2018, not as bad as Matterley Basin in 2017, but the track was still not good. It was a mudder and that’s where things get sketchy for Team USA. It went from going in as the favorites and perhaps widening the gap between them and everyone else after Saturday, to it really being a crap shoot come Sunday morning. All of the Team USA members said after the race the rain made them nervous, made them a bit freaked out, and you can’t blame them or anyone in the crowd for thinking, “Oh, here we go again.”

Great showing for all three guys. Justin Cooper’s fourth in his second moto was massive, the MX2 class is always key to this event, and that gave him five points over the next 250F guy (Marvin Musquin). Eli Tomac getting that holeshot in the first moto was so huge, as he did it from the outside gate, which allowed Cooper to pull out a top-ten start. Chase Sexton was very good as well. Every rider performed and stepped up despite the conditions. In talking to both Sexton and Tomac on Monday’s PulpMX Show, both guys seemed to indicate they did have some more in the tank in the third moto but realized the team win was in their grasp. The goal wasn't to flex on it and win motos, it was to stay off the ground and win it for the team in the mud. Very impressive job by all three and congrats to everyone on Team USA, as it seemed to be a much better and more cohesive effort this year behind the scenes.

Great work for France. Maxime Renaux was great in winning the MXGP class, Dylan Ferrandis showed, like, amazing speed in MX3, although he had some self-induced mistakes, and Musquin rode well. I guess Marvin was the team’s weaker link but on a 250F, I’m not sure what else you could expect from him. I heard he has only ever ridden a 250F at this event for France, which is wild, right? Anyway, the French were really good and even when running 1-2 in the third moto, that wasn’t going to be enough to beat the Americans. Next year, this race is in France and yeah, these guys will be tough.

I think Hunter Lawrence’s move on Justin Cooper early in moto two was probably a little harsh. It caused him to crash and that kicked off a tough moto for the Aussies. Mitch Evans did what he needed to do in moto one but in moto three, he went down in the first turn and that was the throwaway. The team needed Hunter to be around Cooper, or to do what he did in moto one and beat him. The Jett was phenomenal. I didn’t think he would win the class overall but that’s what he did and further cemented his “next” status. Hey, it was still a great MXoN for the Aussies, as this is just the second time they made the podium. But oh, what could have been. If Hunter just stays behind Coop in moto two and Evans doesn't crash on lap one of moto three, they’re second and putting heat on the USA. Hunter crashed three times in his second moto and still got tenth!

In what was the great Tony Cairoli’s last motocross race, he went out with a fourth for his country. The Italians got a massive surprise ride from Mattia Guadagnini, who led most of race two before ending up with a third. There’s almost always some ride at this race that comes out of nowhere, my pick this year to do that was Jorge Prado, but it came from Guadagnini. If Mattia gets a tenth (where about he usually should be, maybe further back even) Italy’s just inside the top ten. But hey, he rode great, Tony had two top tens wearing the #1 and this was the surprise country at this year’s MXoN. Also, just for the record, Cairoli’s last ever pass on a motocross race was Canada’s Dylan Wright. Yay for Canada.

Oh, what could have been for the Belgiums, who always seem to be in the top five at this event no matter who they bring over. They were running third after moto one and Jago Geerts, who normally rides MX2, rode great in moto one on the 450. Liam Everts was also in the mix for great rides until late crashes in both of his motos. The team’s third rider, Jeremy Van Horbeek, who’s probably ridden for Belgium for 15 years, competed in his final race of a great career on the Beta. Everts has really come into his own the last year and gets a shot at the factory KTM in 2023.

Spain was a trendy pick to get on the box and Jorge Prado did qualify the quickest on Saturday in MX1 so that was good. Once the races hit, Spain’s best laid plans didn’t work out though. Normally a great starter, Prado didn’t get great starts (he merely got good starts). Ruben Fernandez did a nice job, but the team’s MX2 rider, Guillem Farres had a terrible day. If he just gets a 15th in one moto, the team is fourth overall. The bright side is all three of these riders should be repping Spain for a long time and I’m gonna stamp it here, they will make a podium at some point.

Missing Herlings obviously hurt the Dutch but so did 2018 hero Glenn Coldenhoff’s day. For whatever reason, despite being one of the only 450’s with an inside gate in moto one, Glenn couldn’t get it going in similar conditions to the last RedBud MXoN when he went 1-1. The team’s best finish came from Calvin Vlaanderen, which was not on the bingo card coming in. But to not have a good race and still get seventh is something a lot of countries (COUGH CANADA) would love to have.

How old is Max Nagl? Well, he was there for Germany yet again and got the team’s second-best score at that. He’s got to be sort of approaching Tanel-Leok-level MXoN participation, right? No Ken Roczen, but the Germans still did pretty well, and as expected, MX2 rider Simon Laengenfelder led the way, although maybe he wasn’t quite as good as expected. The team’s third rider was named Tom Koch and he had “Tom Koch” on all the timing and scoring, which was awesome.

I interviewed Jeremy Seewer after Saturday’s qualifier for my hit podcast “Saturdays with Seewer,” and he explained that yes, Switzerland would be lucky to get a top five, but he himself, had set the goal of winning his class. He didn’t do that, as crashes in at least one moto thwarted that plan, but he was top five in both motos, which was strong. Do you know he’s gotten second in the world championship five times???? Sweet Jesus that’s got to be rough.

A bad day for Team GB, as Tommy Searle ran out of gas in both motos on the last lap, Max Anstie’s bike broke, and Dean Wilson was left to soldier on and get the team’s top scores. Team Dad, Team Vet, Team Pop, whatever you wanted to call the guys, it wasn’t a great day. As Searle told me afterward, if you’re not close to a podium then who gives a shit where you actually end up. For as bad of a day as they had, a tenth is actually not bad.

The Latvians were maybe the most unknown squad to the American MX fans, but Karlis Sabulis is legit and the Latvians can credit their almost-top-ten performance to just steady consistency, as they never had a score worse than 23rd. The score they dropped was a 23, as a matter of fact. Out of the six scores they got, five were between 20-23.

Fast Freddie Noren was ninth on Saturday in his qualifying race, which was solid, but he didn’t do that well in the slop and just logged the team’s third and fourth-best scores. That is less than ideal. Still, they beat Finland so there’s that. This team would be close to a top five with Noren (unless it’s in the sand), Michael Mosiman (who has a Swedish passport), and the injured Isak Gifting in MX2.

This was Team Fantic with two riders on the exotic looking-like-Yamahas-bikes and they were on two-strokes also. And one of them, or both of them on Fantics, cleared the Leap! Kevin Horgmo, on a Kawi, was the team’s best rider for sure, but didn’t have a great day out there. He cased The Leap bad on Saturday trying to jump it on a 250 so he might have been hurting. There were some sneaky, low-key “watch the Norwegians” vibes coming in, but it didn’t work out. Still though, they had Fantics!

The Fins were stoked to be in the A final and I wonder how mad they still are at Harri Kullas, who rode for Finland a few times and then “defected” to Estonia at some point, where he continues to put in good rides.

We’ll end it here with my home country’s performance, which wasn’t very good. The highlight was Dylan Wright’s tenth in the last moto, which was great and salvaged a completely shitty day for the maple leaf. Wright is a legit, world class talent and crashed early in his other moto and got ran over a bunch. The team’s MX2 rider, Ryder McNabb, was probably a bit overwhelmed with the whole thing and did okay in his first moto and then his bike blew up in the other one. MX3 rider Tyler Medaglia came in injured, hurt the hand that was injured, and struggled throughout the day. Another year of, “We’ll get them next year,” I guess…

That’s a wrap on the MXoN, and what a weekend it was. Lots of work, lots of talking, and little sleep and no wi-fi or cell service for a majority of it. Good times indeed! USA DID IT THOUGH!!!!! Email me at matthes@racerxonline.com if you want to chat about this race or anything else.