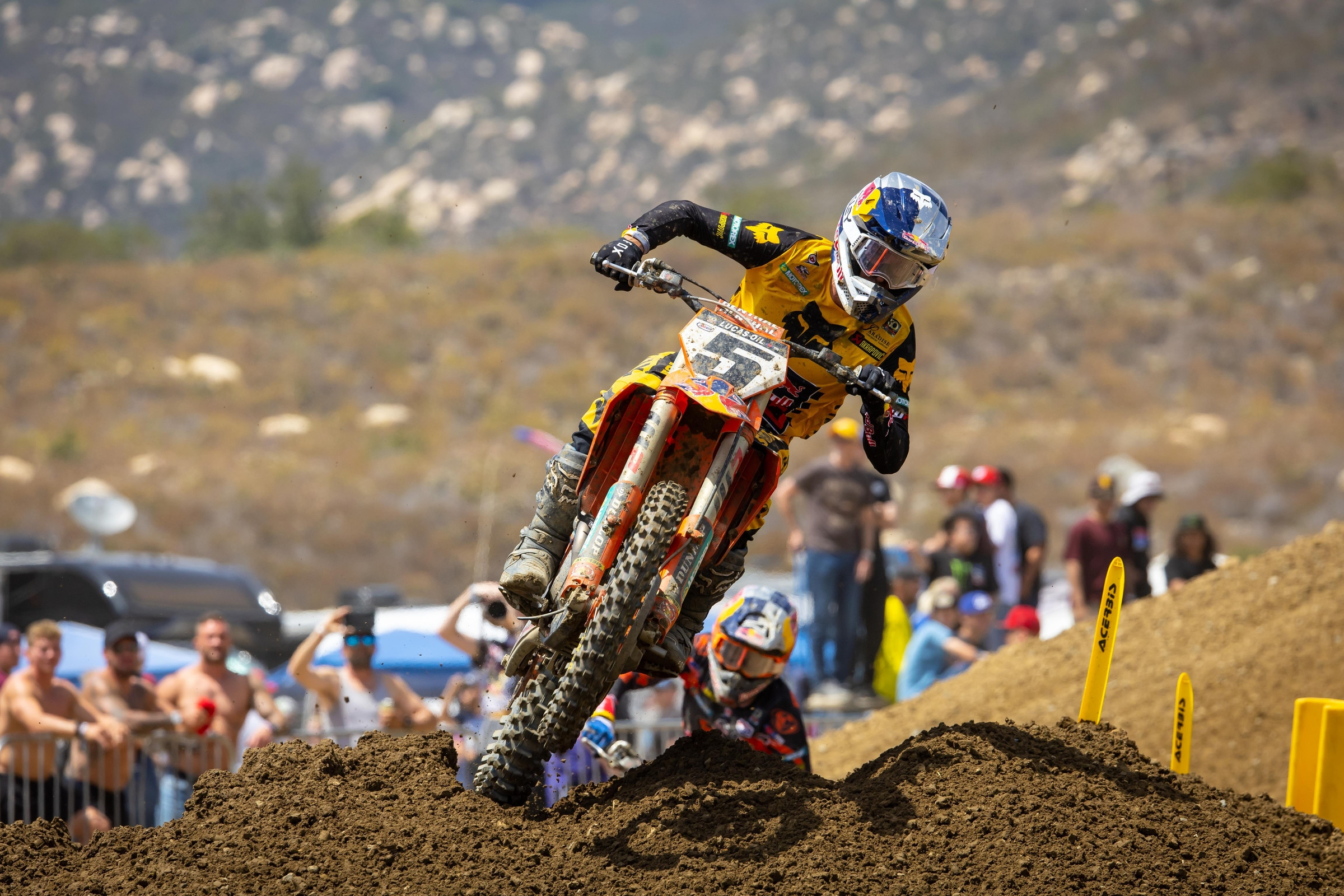 It all looked too normal. Ryan Dungey doesn’t look like he aged one bit. He looked as fit as usual. He was running all of his old logos and gear. His style looked the same on the bike, and, then, the clincher, is that he almost logged his same old results! When Dungey started to catch Eli Tomac for third in the first moto of the day at the Lucas Oil Pro Motocross opener at Fox Raceway, it was as if he had swapped his 2022 KTM 450SX-F for a damned time machine. There might not be a rider more notorious for podiums than Ryan Dungey. There he was, about to do it again, hitting 88 mph with a flux capacitor on the handlebars. This was a time machine. This was vintage Dungey.

In the end, he couldn’t quite hold onto that spot, as a determined Christian Craig came through and bested Dungey, as did Jason Anderson. He finished the first moto in fifth, and took fifth in moto two, as well. It wasn’t a podium, but no one is complaining. Dungey has not raced motocross in six years and retired completely in 2017. This is an insane performance after being off that long. Because it’s Dungey, and because he looked the same, it didn’t seem as shocking as the numbers suggest. But let’s take a step back and realize what this was. Shocking. Amazing. Incredible. This is an athlete coming back five years after retirement and performing within percentage points of his old level. This does not happen in any sport. Dungey made it look routine.

“It was nice to get on the track in practice just to honestly get the nerves out and get going,” Dungey summed up via a Red Bull KTM team statement. “I was just anticipating the day, waiting for it to come, and so it’s here. We had two good practices, chased the bike setup a little bit but we ended up coming to a good spot. Going into the first moto, I got off to a decent start actually, probably 5-6-7 in the pack, and for me it was just important to let it come to me. Don’t rush, don’t override, hit your marks and find good lines as the race goes on. I was able to make some passes and I was actually pretty happy with fifth at the end of that one.”

In the second moto, Dungey started with the leaders to further complete the throwback theme. Nothing looked weird or out of place. Heck, Dungey was even there with Ken Roczen, his old racing rival.

“I got a really good start in the second moto, almost holeshot, and that was nice because I got to run up there with Chase and Ken and get a feel of that pace that I need to work towards,” he explained. “I ended up fifth overall, so I’m not mad. I’m actually really happy with the day and the bike too. We made some changes going into the second moto and that really helped. For me, it’s the best outdoor bike I’ve ever ridden at KTM, so that’s really pleasing. The cool part is I see the areas I need to work on and that’s the challenge and the motivation, so moving forward.”

Yup. You can only imagine Dungey will get better from here, and the podium is close.

It is easy, in hindsight, to know it would go this way. Because it’s Ryan Dungey! We’ve probably all harbored the thought that he could just roll out of bed and get a podium anytime, anywhere. He didn’t quite land there at the end of the day, but this was far from an embarrassment or a tarnishing of his legacy. In fact, he did something athletes making comebacks hardly ever do: he actually enhanced his reputation! Ryan Dungey was already one of the legends of the sport, but in just one race, he already made this a legendary comeback.