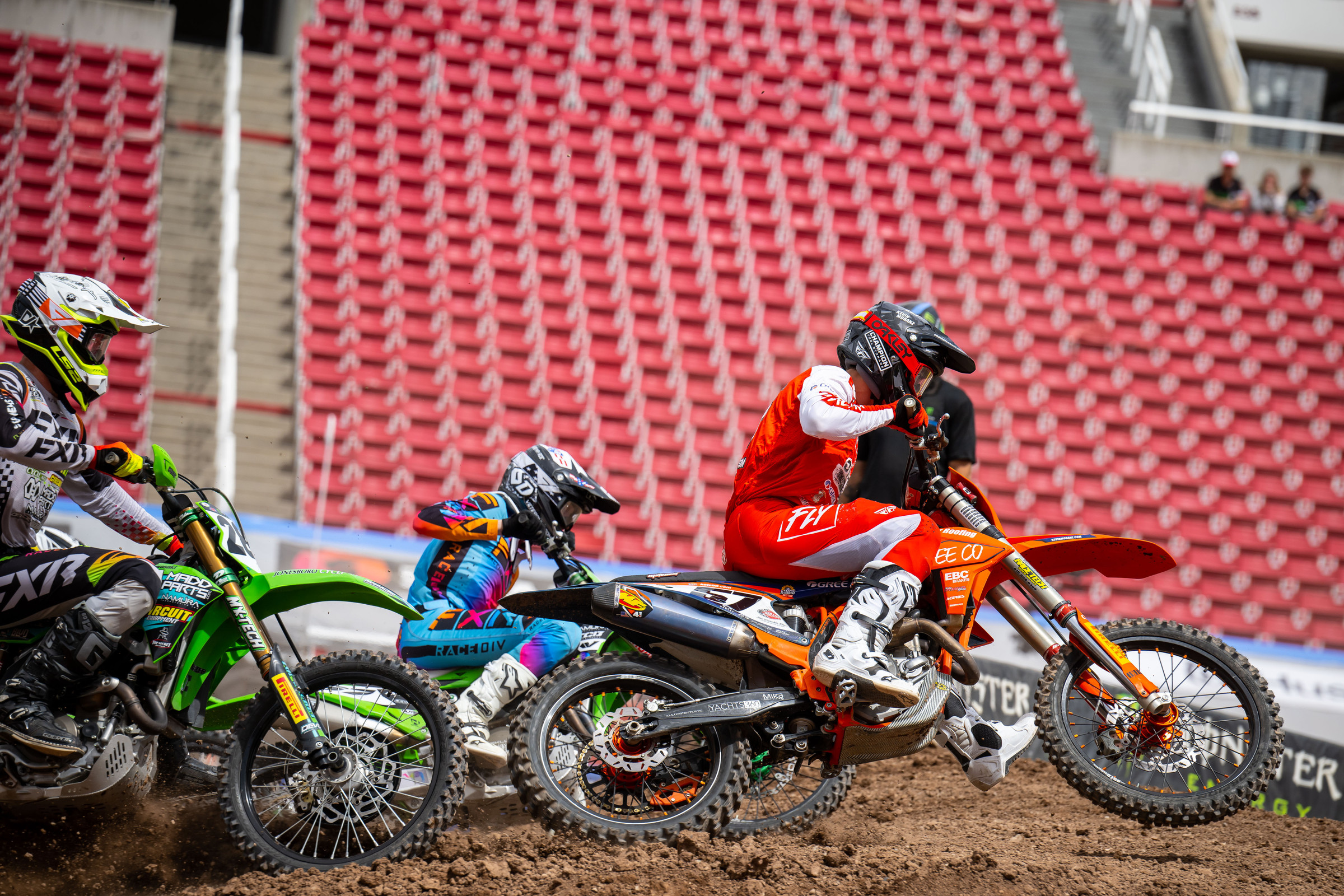 The cost of racing at any level can be exorbitant. Privateers, who crisscross the country burning fuel, sleeping in vans, eating sandwiches, and scrounging parts all to line up are particularly aware of this. Garrett Schlegel, creator of PrivateerLife.mx, wanted to figure out a way to help these riders who are the core of our sport. He came up with an idea to connect racers and race fans to ease some of the struggles of being on the road. With the Lucas Oil AMA Pro Motocross Championship just days away, we wanted to learn more about this program.

Racer X: Before we get into what PrivateerLife.mx is all about, tell us a little of your background with dirt bikes and moto.
Garrett Schlegel: I started pretty late. I didn't get my first bike until I was in college. I got a '92 KX125 from a roommate of mine who was moving back home and had no way to take the bike with him. When I moved to Sacramento to start my career I took my old high school buddy and roommate riding and got him hooked as well. We went to Hangtown and he bought a CR125 the next weekend. From there, some friends I knew were into hare scrambles and cross country and said I should come out and race. Those races started to incorporate motocross tracks into the loops. I realized I was terrible at jumping and knew I needed to practice moto. I started racing motocross and working my way up to Intermediate for moto and 'B' Class in hare scrambles/cross country. This was around 2000 to 2006.

How did you become interested in the plight of the Privateer?
Around 2001 is when the privateer videos from The Great Outdoors started coming out. You just saw how bad these guys were struggling. I was a single guy at the time and I'm looking at my two buddies that ride thinking how we had graduated from college and had decent jobs. I thought, “We can help these guys out.” We could have them to our house when they go to Hangtown, give them a place to stay and cook them a good meal. Something along those lines. I wanted to do a website to make it happen. In my mind I thought, "How could this fail? You're helping people." Fast forward to 2017 and I was at a point in my life where I never wanted to look back in my life regret at least not trying to bring this idea to life. I had a buddy that knew how to build a website and we just rolled it out. I didn't know anyone in the industry at the time. Just people around the Sacramento area. I put it out there and it started growing from there.

How did you spread the word?
I reached out to Daniel Blair through Instagram. He responded and said he really liked what I was doing. He had me on Main Event Moto and that's where it started to get some exposure. Daniel put in a word with Steve Matthes from PulpMX and eventually he had me on. After that I was on the MotoXpod Show and BigMX Radio and we just went from there. Without all of those media outlets and their voice we wouldn’t be where we are today.

Explain how it works.
First, I want to say this isn't just for pro level moto guys. It's for cross-country riders, flat-track riders, enduro guys, etc. Whatever you may ride, this can be of use to you. There’re two sides to it. You can sign up as a rider or a supporter. As a supporter you can offer a check list of things. A place to stay, a shop to use, if a rider needs a welder, maybe someone has a practice track they're willing to let you ride on, anything along those lines really that will help offset the cost of traveling the country. I used to pull a trailer all up and down the state of California with 100 gallons of water. If I didn't have to have all that water I would have gotten much better fuel mileage. If a rider can find someone that will let them fill up their water tanks when they get close to the race, that's a savings. As a supporter, you're signing up as someone who wants to support and you can choose the options you want to provide. You just list the amenities you can provide. All your information is there. Riders can map out where they are headed and see who is a supporter along the route. On the racer side you sign up on the site and then you can search for supporters.

Is there a fee to join? I've noticed on your Instagram page that sometimes you will draw a name and pay a rider's entry fee or give them gas money. Where does that money come from?
There is no fee to join. We don't really have official sponsors. I don't make a dime on this. It's not about that. I'll have a $1000 t-shirt bill in a few days and I just give those away. It's a labor of love for me. There have been people that want to help financially instead of offering a place to stay or such. They may throw in a couple hundred bucks and that's been amazing. A few years ago, a friend of mine that was the general manager at a building supply company, Westside Building Materials in Oakland, CA, and the following year, San Luis Obispo Painting, agreed to cover the entry fee at each round. From there, other people came on board. Andy Gregg at Guts Racing and Eric Phipps at Works Connection got involved by helping with a $100 gas card. Most of the money comes from just regular guys like you and me. All that money goes back to the riders that sign up on the website. We do an entry fee reimbursement every week and try to have two or three $100 drawings on top of that. If a business contributes I try to get them some mileage by letting them do the drawing on their social if they want. I can't believe how many people that have never met me are willing to send me money and support guys they’ve never met.

What's the reception been from the riders and supporters?
As you can imagine the riders are blown away. One privateer, Brent Rouse, told me when I walked up to him at PIR (the big local race in Portland before Washougal), “Everyone knows who you are. You're the guy that gives us money.” Word eventually gets around, but not as fast as I would have thought. You'd think I'd be getting flooded with people signing up. The riders who are signed up are stoked. Even if it's only $100, they are happy. The supporters are just happy to be involved. It's a fun thing. We've been helping guys like Kevin Moranz from the beginning.

What are the plans for this coming 2022 season?
Right now we're trying to build momentum again. I've been reaching out to people that have helped in the past and they are starting to come back onboard. It's not as big as it was the last time we did this before Covid, but I have a feeling it will get there. We would love to get some support from gear companies such as Fly, FXR, and others to donate signed jerseys that we could auction off and then use that money to give back to the privateers. This year O'Neal Racing gave us two Dean Wilson sublimated jerseys as well as a Hunter Sayles and a Justin Hill jersey that we will be auctioning off on eBay in a couple weeks. From the money we get from those auctions we then turn around and give that money back to the privateers in our weekly $100 drawings. Those kinds of things would be very helpful without having to just give us money from their budget.