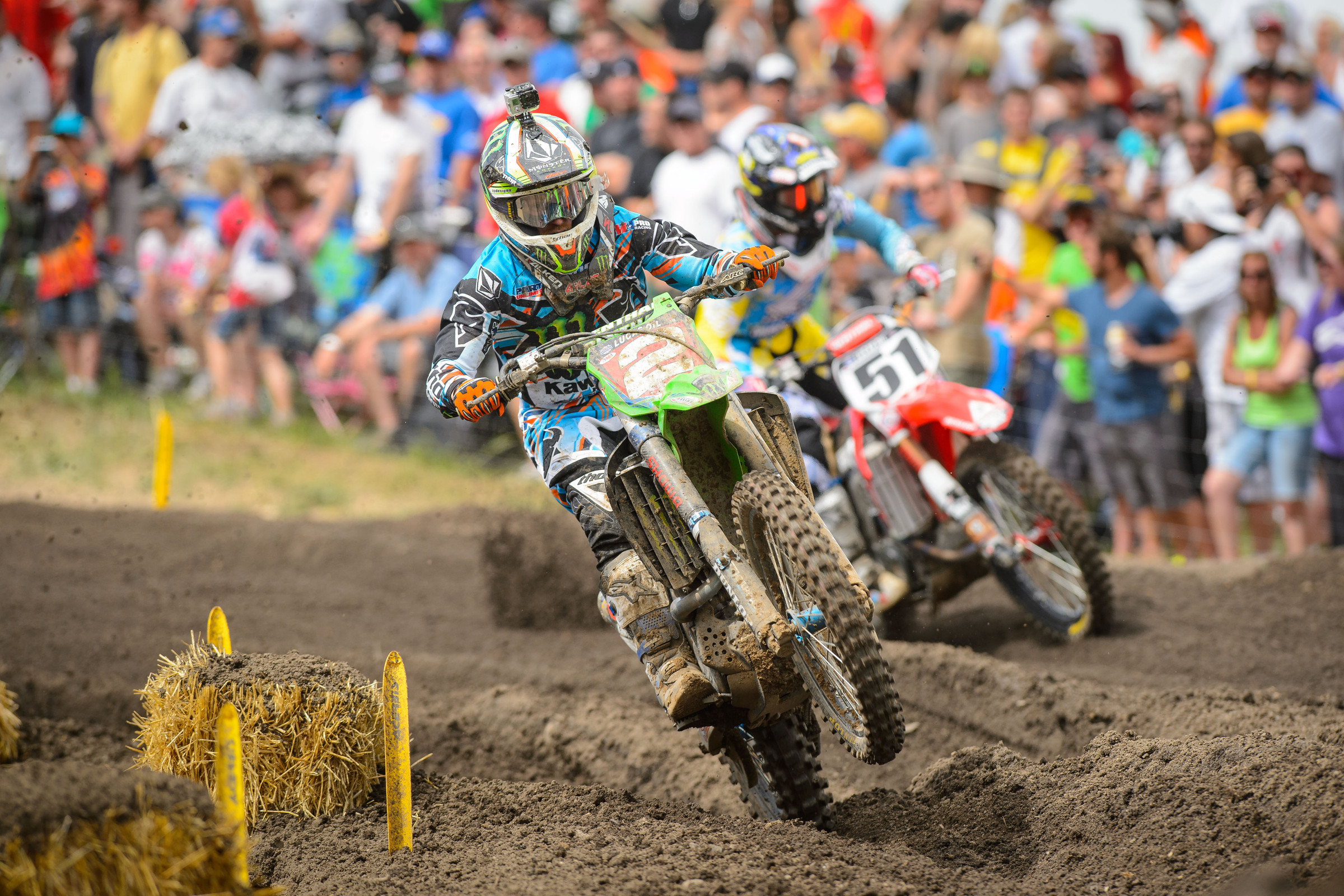 The MAVTV+ 50-Day Countdown to the 2022 Lucas Oil AMA Pro Motocross Championship hits 2013, as we go over each year of the series’ history, beginning with 1972. After a particularly bad year of injuries decimated the ranks of Monster Energy AMA Supercross, the field was rejuvenated and reloaded coming into 2013, but as good as everyone was hoping the action would be, nobody could have predicted how wild the first few rounds would be once the gates started dropping in Anaheim.

We should have known we were in for a wild ride of a season when Davi Millsaps came out of nowhere to survive an intense (that’s an understatement) battle with Trey Canard to win the season opener in Anaheim, and the surprises continued one week later when then rookie Justin Barcia exploded out of the gate in Phoenix and lead every single lap of the main event. He looked like a seasoned pro doing it too, so much so that we journalist types immediately started wondering if he would go on a run and take control of the series, not unlike a certain rookie back in 1993. With the benefit of hindsight, the idea now seems a bit silly (Barcia won just one more race, Seattle, and finished fourth in the points), but it just goes to show you how good Barcia looked in Phoenix.

By round three, defending champ Ryan Villopoto had had his fill of not winning, and stepped up to claim two in a row. One week later, the air shock on Ryan Dungey’s KTM mysteriously lost pressure on the line in his heat race and he was forced to go to the LCQ, where he barely transferred after crashing. Then Dungey went out and won the main!

Millsaps, meanwhile, was eager to prove his win at the opener wasn’t a fluke. He had been clicking off podiums and eventually won again San Diego. Millsaps continued to nail podiums pretty consistently, resulting in him holding the red plate deep into the season, but Villopoto would not be denied. The Monster Energy Kawasaki rider wouldn’t finish worse than second in the remaining 11 rounds after San Diego, and astoundingly, won eight of them. That’s a first or a second in the final 11 races of the year! Millsaps was fantastic on his Suzuki, but he banged up his knee around Daytona time and had a few tough races just as Villopoto was surging. There just isn’t much that can be done when one of the all-time greats goes on a rampage.

James Stewartwas around for this season, riding a Yoshimura Suzuki, but wasn’t himself. There were high hopes in the pre-season for Stewart on the Suzuki, after he came out of the box flying on the machine when he first started racing it the previous summer. Unfortunately, Stewart tore his ACL early in the year. He managed to win a single race, Atlanta, but exited the series early after breaking his wrist in Minneapolis.

Things were a bit wilder in the 250 Class. Out west Eli Tomac, in his final season aboard a 250, was cleaning up. Until Oakland, that is, where he had a big crash in the whoops that knocked him out of the race. That handed a big lead to Ken Roczen and just like that, the 250SX West Region title fight seemed like it was over. Then, inexplicably, Roczen crashed in his heat in Salt Lake City and opted to pull out, then wasn’t able to qualify out of the LCQ. The door was wide open for Tomac to even the score, but he had a bad race and was only able to take fifth. Tomac won a week later at the finale, but Roczen claimed second to land the title by just two points over Tomac.

In the east it looked like Dean Wilson’s title to lose when he won the opener. A crash in Indianapolis would result in broken ribs, however, and once again, Wilson would see another shot at a supercross title evaporate. Wil Hahn was the benefactor, but he had a serious challenge to contend with in the form of a surging Marvin Musquin. A broken hand sustained in practice at the finale in Las Vegas would further complicate things for Hahn, but he somehow soldiered through the pain for third. Tyler Bowers, who was filling in at Monster Energy/Pro Circuit Kawasaki, narrowly beat out Musquin for the win in thrilling fashion. Had Musquin won, the title would have been his. Hahn, broken bone and all, hugged Bowers ecstatically and spoke several words to him immediately afterward. Legend has it Hahn was asking Bowers what kind of beer he wanted in the keg Hahn was going to buy him. Who knows, really.

Next up was the Lucas Oil AMA Pro Motocross Championship, and just like in supercross, the best racing would happen in the 250 Class, thanks to Villopoto, who was simply on another level in the 450s. The worst he finished was sixth in a moto at Spring Creek, and he only finished off the podium three more times, taking fourth in motos at Muddy Creek Raceway, Southwick, and Spring Creek. When it was all said and done, Villopoto had won an incredible 18 of 24 motos, putting a big hurt on talented riders like Dungey, Canard, Barcia, Stewart, Andrew Short, and more. Again, there just wasn’t much anyone could do when Villopoto was performing at his best.

In the 250 Class Tomac and Roczen picked up right where they left off in supercross. Roczen drew first blood by sweeping the opener at Hangtown, only to have Tomac take the overall in his home state of Colorado at Thunder Valley. It would play out like this round after round, with both riders trading wins and neither one flinching. At roughly the halfway point, however, Tomac finally started putting some ground between himself and Roczen, and things really came apart when Roczen got pitched into the air and had a huge crash in the corner before the sand whoops at Spring Creek. It looked as though a bomb had gone off under Roczen’s front wheel! The result was a DNF, and while Roczen was amazingly able to come back and take second in moto two, the damage was done, and he couldn’t get within striking distance of Tomac again. Credit to Tomac too, who was nearly perfect in the second half of the season, winning 10 of the last 12 motos.

Defending champ, Blake Baggett, was racing but just wasn’t the same after a sustaining a badly broken hand and wrist at the supercross season opener. After the final round Tomac and Roczen would vacate the 250 Class to join an already talent-laden 450 Class in 2014, leaving the door wide open for the next generation of superstars—young 250 riders like Jeremy Martin, Cooper Webb, and Adam Cianciarulo were just beginning to rise to prominence. Of course, you’ll have to wait until the next Countdown to read about that.