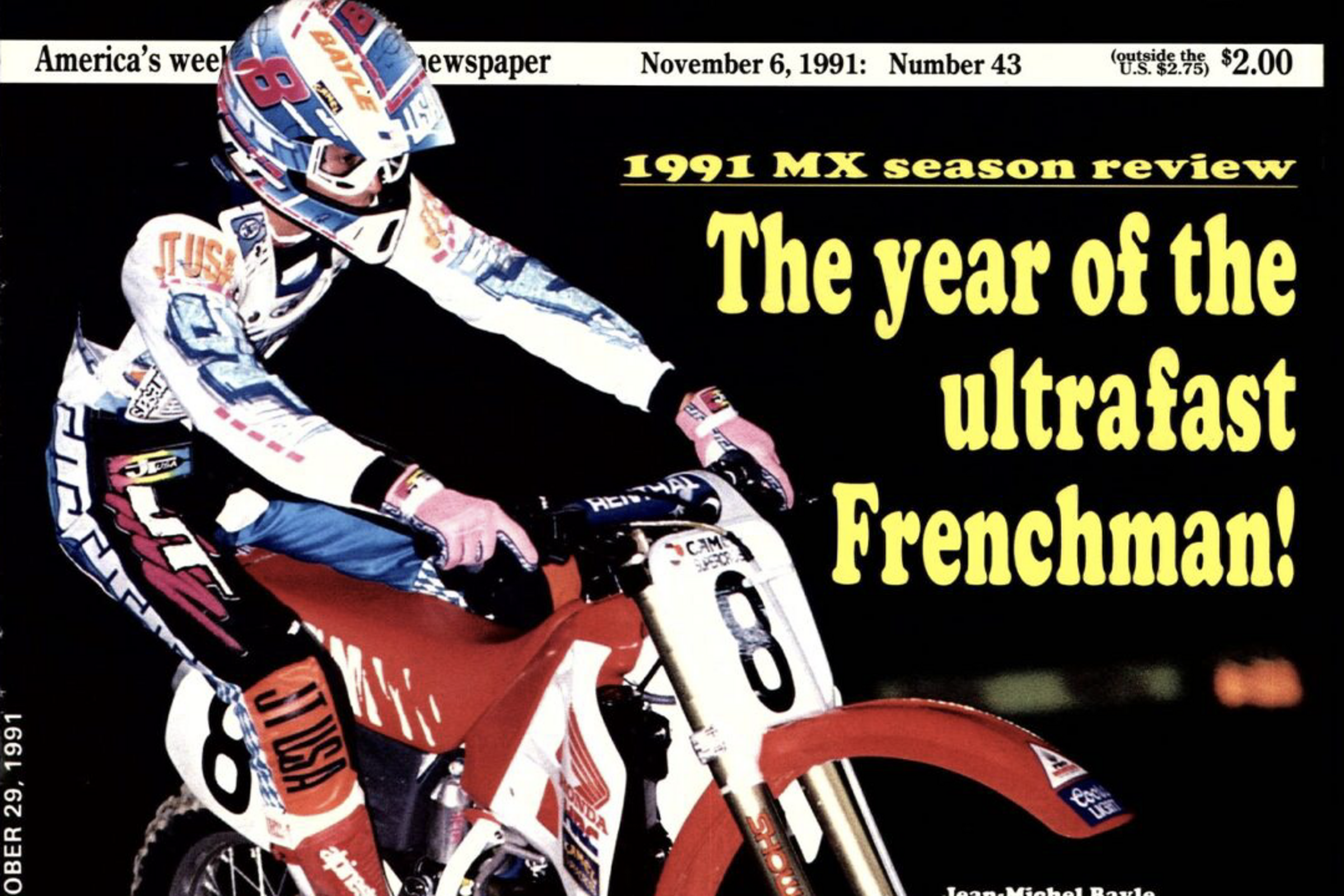 It’s time to take a look at the 20th year of AMA Pro Motocross, 1991, in our MAVTV+ 50-Day Countdown to the 2022 Lucas Oil AMA Pro Motocross Championship, which will begin on May 28 at Fox Raceway in Pala, California. What started in 1972 as a very quaint, scattered affair involving four different championship series had been boiled down to a thriving series that overlapped with AMA Supercross, which by then had become the biggest series in dirt bike racing.

When the 1991 season started, Team Honda’s Jeff Stanton was on top of the world, having won both SX and 250 MX in both 1989 and ’90. He had taken over just as a bevy of superstars were winding their careers down. Bob Hannah, Broc Glover, and Johnny O’Mara had recently retired. Rick Johnson would join him on the sidelines after five SX rounds, finishing 20-10-10-10-8 in those five races, his wrist constantly locking up due to his broken navicular bone. And Ron Lechien, injured for all of 1990 after breaking his femur at the ’89 Steel City 500 National, would pretty much be done by the end of the year after a brief 500cc National ride with TUF Racing.

The Hi-Flyers trading cards were a hit in 1991! Check out several of them below.

But into the open spaces those guys left were hungry young guys like Damon Bradshaw, Mike Kiedrowski, Mike LaRocco, Jeff Matiasevich, and more. There was also the ultimate interloper, Frenchman Jean-Michel Bayle, who now had a year-and-a-half of the American way of moto life under his belt. It would be Bayle would proof to be Stanton’s biggest threat, and this threat was coming from the box van next door, as they were Honda teammates.

It’s hard to explain exactly what kind of year JMB had in 1991, because it’s simply unprecedented. He would sweep all three championships he lined up for—AMA Supercross, 250 Pro Motocross, 500 Pro Motocross—and do it with a methodical consistency and grace that was remarkable to behold. The guy was just so fast and smooth and creative and consistent in ’91 that it still resonates to this day. He won the 250 Pro Motocross title without winning a single national, but rather by just steadily staying where he needed to be, especially after the Hangtown race got swamped by a heavy storm, causing so much flooding that few factory riders finished—not Stanton, nor Jeff Ward, nor Bradshaw, nor Matiasevich. It was so bad that the second motos were canceled. But Bayle’s second-place finish, behind only privateer hero John Dowd, gave him a 22-point lead that he would carefully manage for the rest of the seven-round series. He would win the title over Stanton by 26 points.

In AMA Supercross and the 500 Nationals JMB won more races than anyone else, all the while quietly planning to quit racing dirt bikes all together. It was at the Las Vegas SX, won by Suzuki’s Mike LaRocco (his first career 250SX main event win), that Cycle News’ Kit Palmer got the scoop on Bayle: He would soon be moving over to road racing.

“I want to ride the World Champion Road Racing circuit in the 250cc class,” said Bayle. “I hope to ride an HRC Honda, and I hope they will support me. That would be my first choice. If not then I will make my own team in France with somebody, or an organization, and hopefully ride the HRC bike.”

True to his word, within a year and a half, Bayle would be done with SX/MX and trying to make it on the 250cc World Championship Road Racing circuit. It would have been sooner had Honda not made him honor his SX/MX contract and race in 1992 with all of those #1 plates.

As for the rest of 1991, it’s also worth mentioning that Bayle also won the four-round Chesterfield Masters of Motocross Championship over a collection of both fast Americans (Stanton, Ward, Cooper) and Europe-based racers (Stefan Everts, Donny Schmit, John Van den Berk). The races were held in Monte Carlo, Milan, Barcelona, Villars-Sous-Ecot in France, and Maastricht, Holland. He also won the Paris-Bercy SX back home in France, rounding out a staggeringly successful season.

In the 125 class Mike Kiedrowski, now with Kawasaki, took his second #1 plate by topping defending champion Guy Cooper of Team Suzuki by 16 points, with Yamaha’s Jeff Emig third in the final rankings. But that wasn’t the biggest story in the 125 class in 1991, nor was it the upset win by DGY Yamaha’s Doug Henry at Hangtown. Rather, it was the introduction of the new PEAK Anti-Freeze/Pro Circuit Honda 125 team that Mitch Payton put together. Having hired four fast youngsters in Jeremy McGrath, Steve Lamson, Brian Swink, and Jeromy Buehl, it marked the start of the satellite team era, as well as the birth of the most successful 125/250 team in the sport’s history—a team still going strong now as the Monster Energy/Pro Circuit Kawasaki outfit.

Beyond that, a few other things in 1991 included Yamaha’s Doug Dubach getting his one and only AMA Supercross win at San Jose. And Jeff Ward would win the last of his career at Oklahoma City. Over in Europe Trampas Parker would win the FIM 250cc World Championship over fellow American Mike Healey, though Donny Schmit lost his 125 world title after winning the first three races, only to crash and get hurt at round four in Hungary. And Team USA’s Stanton, Bradshaw, and Kiedrowski won the Motocross of Nations again, Team USA’s 11th win in a row.

And somewhere out there on the amateur motocross tracks of Florida, Tennessee, Oklahoma, and Texas, a little kid on a Kawasaki KX80 with cut-down seats was starting to make a name for himself… More on him in a few more years.