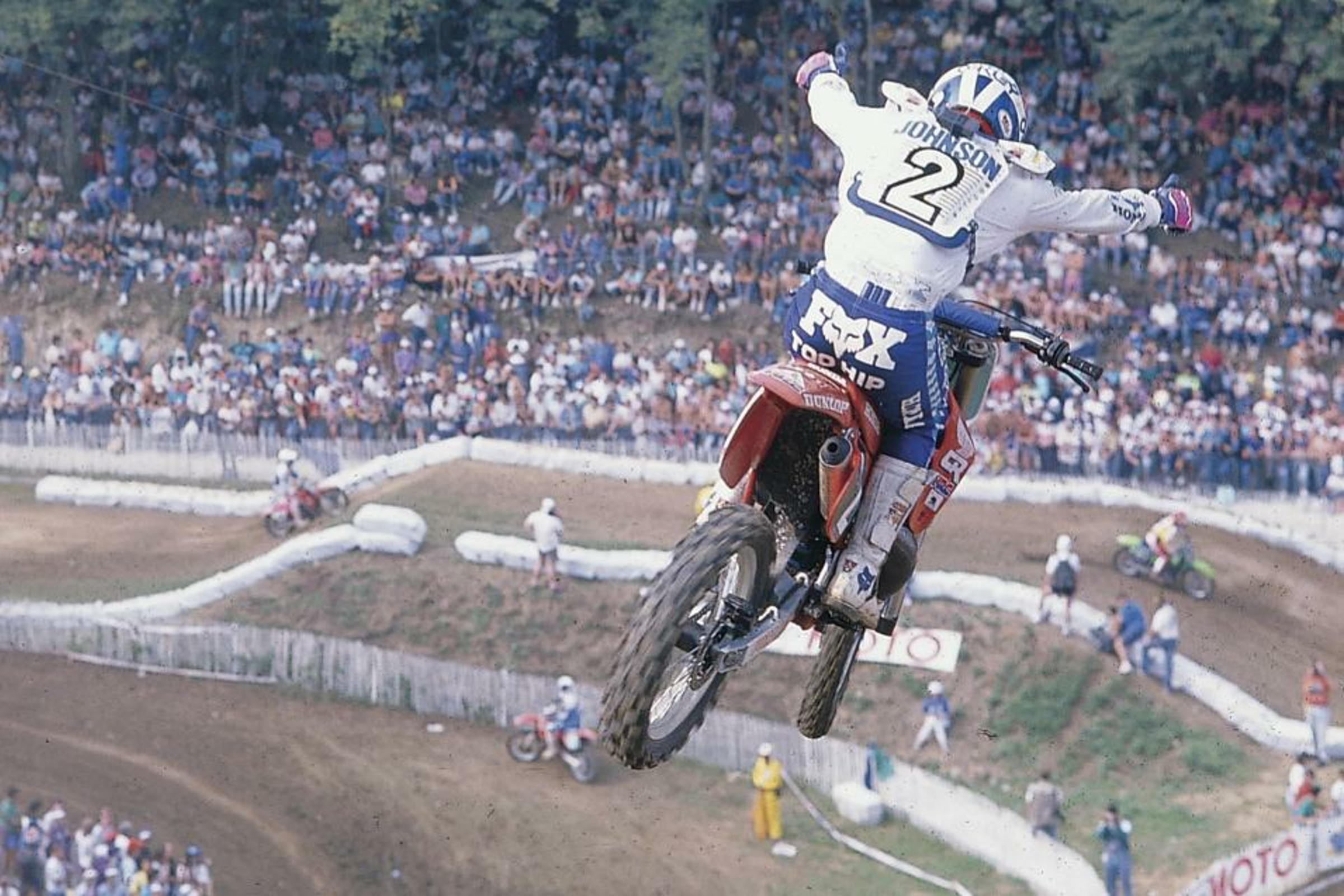 We’ve reached 1988 and a dramatic year, though more for what happened off the track than on it. The MAVTV+ 50-Day Countdown to the start of the 2022 Lucas Oil Pro Motocross Championship is addressing each year in the history of the series, one year closer to the present. The racing would be great in ’88, but it was all overshadowed by something sinister.

The drama came from the ongoing war that emerged from the conflict between the man who owned the exclusive rights on AMA Supercross races in California (Michael Goodwin) and the man who owned the exclusive rights to hold dirt-related events in California stadiums (Mickey Thompson) like the Los Angeles Coliseum, Jack Murphy Stadium in San Diego, and the Los Angeles Coliseum had turned toxic by this point. That’s why despite an ’88 Supercross at Angels Stadium in Anaheim, won by Ricky Johnson, it was not a part of the AMA series, which actually began one week later at the Houston Astrodome, won by Jeff Ward. And then the San Diego SX wasn’t a part of the AMA series, but rather the MTEG (Mickey Thompson Entertainment Group) Coors Super Crown of Stadium Motocross Series.

It all came to a tragic head on March 16, 1988, when two assailants on bicycles rode into Mickey and Trudy Thompson’s driveway in Bradbury, California, and shot them both dead. The killers escaped and were never identified. But over the years fingers pointed more and more towards Goodwin as a person of interest and, ultimately, after many years of investigation, he was brought to trial and convicted of double-murder for hiring the shooters. To this day Goodwin, serving a double-life sentence, claims he is innocent.

Here’s a very interesting video that goes deeper into the Thompson/Goodwin saga:

After the murders, the MTEG Coors Super Crown of Stadium Motocross would basically be absorbed into the AMA series, though the ’88 Anaheim and San Diego races would not count towards series points, only the late-summer Los Angeles Coliseum race that would be won by six-time AMA Pro Motocross Champion Broc Glover, in what would be his last AMA race. The ’88 AMA Supercross crown would ultimately go to Team Honda’s Rick Johnson.

Outdoors, Johnson would add what would be his seventh major title when he also topped the AMA 500cc National Motocross Championship, topping Kawasaki’s Ron Lechien and Jeff Stanton.

But in the 250 Nationals, Johnson would be beaten by his longtime rival Jeff Ward, with Lechien third and Stanton fourth. Johnson had suffered a mechanical breakdown at the Lake Sugar Tree round of the six-race 250 National Series, which gave Ward the cushion he needed to manage the title.

And in the 125 class Team Honda replaced two-time champion Micky Dymond, who had left for Yamaha, with Suzuki’s George Holland. The California-native responded by winning the ’88 AMA 125cc title, making it the fourth year in a row that Honda had won that crown. Finishing second was Suzuki’s Donny Schmit, with Honda support rider Guy Cooper third.

Despite the drama surrounding supercross, the sport was thriving in 1988. With old heroes like Bob Hannah and Broc Glover in the twilight of their careers, plus new stars like Stanton, Damon Bradshaw, Mike Kiedrowski, Jeff “Chicken” Matiasevich, and Larry Ward on the near horizon, it was plain to see that a transition of sorts was coming. And one other thing we spotted in the old Cycle News ads for the era was a very early sign of the coming four-stroke era, as KTM released a 600cc Motocross “Thumpin’ Thumper” to not a lot of fanfare or demand. That was to come later, and from another brand.

And at the end of the year Team USA’s Johnson, Ward and Lechien would once again win the annual FIM Motocross of Nations in France, with a superb effort by all three riders in the 500 (Lechien), 250 (RJ) and 125 (Wardy) classes. But they would meet a teenaged Frenchman who had just won the ’88 FIM 125cc World Championship and was able to begin shaking up the global order of the motocross world, but that’s a story for another year…