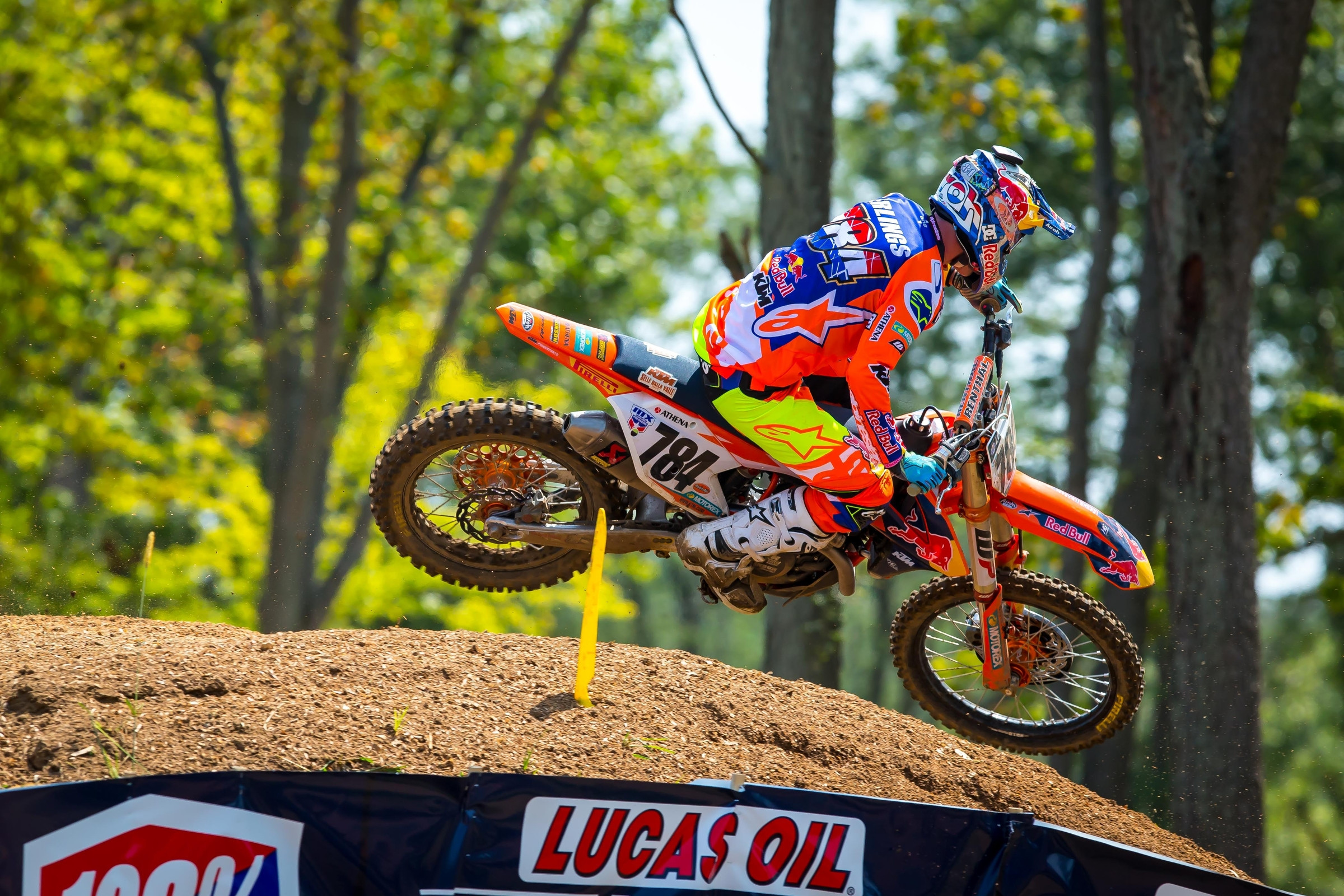 They're back! Huge news broke today when Red Bull KTM announced that nine-time World Motocross Champion Tony Cairoli would indeed come to the U.S. to race the first two rounds of the 2022 Lucas Oil AMA Pro Motocross Championship. The legendary AC222 retired from full-time racing last year, but said he hoped to keep racing here and there, mentioning his desire to try some races in the U.S. Of course, actually putting in the training, riding, and risk needed to race is much harder than just saying it, and it's good to hear that Cairoli, who last raced at the Paris Supercross back in November, is going to give it a go.

Yes, the world is also waiting for word on Jeffrey Herlings, who could also give AMA Pro Racing a shot if his injured foot heals up fast enough. It will probably be a few weeks before we know if he's in or out.

As for Cairoli, although he's making it clear this is just for fun and not a championship quest, it's impossible for fans to resist wondering how we will do once he gets here. Bench racing is built around GP vs. AMA battles.

For this week's The List, we dug back into the archives and found our last article charting GP-based riders showing an at occasional AMA National. We originally wrote this story in 2015, and now we've updated it with more recent examples.

By the way, we're not covering riders who officially moved here to race full time, like Jean-Michel Bayle in 1990, or Greg Albertyn in 1995, and so many others since then.

A gold standard in so many ways. JMB was here on loan for HRC in Europe, trying to get a foothold for a future in America. The reigning 125cc World Champion more than accomplished that, with rapidly improving supercross results as well as an off-the-wall win in the opening round of the 250cc AMA Nationals at Gatorback. He then went back to Europe and won the ’89 FIM 250cc World Championship, and then came back to America and won the last 500 national at Unadilla! Two wins in one season for a full-time Grand Prix rider? Amazing.

After watching his nemesis Greg Albertyn leave the GP scene with three FIM World Championships for a better life in America, Stefan Everts followed him over for one race: the 1997 Unadilla 250 National. Everts rode a great race on his CR250 and was in position to strike for the overall in the second moto before tangling with Yamaha’s John Dowd dropping into Screw-U. Everts went 3-5 for fourth overall, but at least he had the moral victory of being ahead of Albertyn.

Vohland was an American visitor at this point, as the Californian spent several years chasing a GP title in Europe before later returning here as a 125 national threat in the late nineties. But on this day at Washougal, he was on a 250 and nearly made the podium, with 3-6 finishes and fourth overall. Good work by the Lone Wolf!

Vohland had this to say about the race:  "I believe we were between GPs, and I was heading over to one of the Asian rounds. It was fun, but it's always challenging when you go to another country and you don't have your full race bike. I brought my suspension with me and that was a perfect opportunity to test myself. When you live away from home in a different country for so long it's always nice to come back home, for racing or visiting."

The five-time 500cc World Champion from Belgium came to Southwick to show what he could do in the sand. He made a bold statement when he led the first lap on his big KTM four-stroke, but then Ricky Carmichael took over. Joel ended up sixth overall.

With help from the Kawasaki factory team, South Africa’s Gareth Swanepoel came across and placed sixth in the 450 Class at Unadilla. He ended up making a career for himself as a trainer in the U.S., with Monster Energy Star Yamaha racing.

The most frequent visitor of his generation, Desalle almost beat Ryan Dungey, upstaging James Stewart's “return to the outdoors" race, at Unadilla in 2010. The previous year, riding a Honda, he finished third in the first moto at Washougal, and in 2013 he finished sixth at both Thunder Valley and Muddy Creek.

“Calimero” can ride the sand as well as just about anyone, and at Southwick he raced to a solid third in the first moto before problems in the second moto ruined his shot at an overall podium. He also raced The Wick in 2001 and went 16-30.

The shocking winner of the 1989 125cc World Championship, Parker came to Budds Creek on his way home to Louisiana and rode a borrowed KTM 125 to eleventh in the final results. Parker would return in 1992 as the reigning FIM 250cc World Champion at RedBud, but would have bad luck from the start and not finish.

Trampas Parker was the first two-time World Champion from America; the late Donny Schmit was the second and last. Schmit went abroad in 1990 after a year as a privateer in 1989, his dislike of SX was at that point weighing on his mind. He would win his world titles in 1990 and ’92, but he had such amazing speed that he could pop up at the occasional AMA Motocross race and do some damage, like in 1990, when he finished second to Mike LaRocco at Millville, or even 1995, when he was already retired from full-time MX, but he still went out and went 5-4 on a borrowed Honda! He would pass within the year due to a rare blood disorder, but his legacy as an all-time badass lives on.

The Tennessee journeyman went to Europe in a not-so-great 1997 season and came back for two races, finishing tenth and thirteenth respectively. Brownie had better days to come, both in Europe and America. Three decades later he remains one of the most versatile dirt bike riders of all time. He even won an X Games gold medal!

Both 125cc World Champions, California’s Bob Moore and Holland’s Pedro Tragter came across in 1997 to race Unadilla. Tragter finished seventeenth in the 250 Class; Moore finished fourteenth in the 125 Class.

The very fast and cool Alessio Chiodi, three-time world champ, came across in 1999 to take on Ricky Carmichael at Steel City aboard his Husqvarna, only to have it break in half in qualifying. Incredibly, RC was nearby watching, and he ended up hauling Chico’s bike back to the pits on the Pro Circuit pit vehicle. He came back a year later at Glen Helen, but his luck didn’t get any better—he finished twenty-ninth overall after problems in both motos.

This blazing fast Kiwi was setting the stage for a full-time assault in the U.S. back four years before it happened. He raced at Unadilla and Budds Creek in 2002 as a very young prospect, riding a KTM 125 to decent finishes, though not of the level he would show five years later when he won the East Region SX title. BT101, as he was called, was much, much better than his result here showed; he just had rotten luck and too many injuries. But he did win a world title, along with six 125 nationals in 2007 alone. But he lost that title to his friend Ryan Villopoto by just 19 points.

Osborne and his sponsor Steve Dixon came to Southwick and he acquitted himself well, only to be DQ'd because he rode the following year's YZ-F model that was not yet homologated. It was a bad deal after a good ride.

The wild child. Healey barely lost the 1991 FIM 250cc World Championship to fellow American Parker after Jeff Stanton beat them both in Japan. Healey didn’t have such a great 1992 season, so when it was over he decided to get in a minivan and do a couple of nationals in the fall, with help from Cernic’s Racing. He went to Steel City and, with at least thirty pounds on everyone else, somehow won the second 125 moto on a borrowed RM125. It was one of the coolest, strangest successes I think I ever saw!

When Glen Helen canceled their national in 2010 and replaced it with a GP, it gave all of the European riders the chance to race the Hangtown opener. Only Big Ken De Dycker took up the challenge, and he finished ninth overall. It wasn’t exactly the best result, but the respect he earned in trying was well earned.

Desalle’s Suzuki teammate, he joined him in the fortnight’s trip to America in 2013, scoring top-ten finishes in both races. Very cool, very fast, and very much one of Belgium’s best of a generation.

The New Zealander raced here in 2002 and rode for Planet Honda. The GP star went 5-8 for sixth overall, which was a very good showing. For our dollar, he was one of the fastest men never to win the FIM World Championship.

Fast, funny, strong, and fearless, Shaun Simpson was the perfect guest when he showed up at Unadilla. He rode well and hard. His fourth-place finish was impressive, and so was his charisma and enthusiasm—especially since he was coming off a GP win just six days earlier!

The other gold standard? Herlings was a rookie in the MXGP class in 2017, he couldn't wrestle the title from his teammate Cairoli but he definitely came on strong late in the season. He also decided to come to the U.S. In a performance that lived up to his nickname "The Bullet", Herlings was the fastest in qualifying and then won the first moto. He suffered a horrible start in moto two which looked to ruin the overall, but he logged an amazing charge from the back to get all the way to second place. Then race leader Marvin Musquin crashed, and Herlings went 1-1 in his first-ever national!

This Tony Cairoli news has our resident MXGP super fan Kellen Brauer all pumped up, so he gave us this list of recent appearances by international riders.

Alessandro Lupino of Italy took 16th at last year's Fox Raceway National, and Rick Elzinga raced the last two rounds of 2021 and went 31-16 in the overall results. Australia's Wilson Todd came over in 2019 and picked up a TLD fill in ride, he went 19-15-10-7 in the 250 class. Todd Waters also came over in 2019 and went 12-13-14 in the 450 class at the first three rounds of the season. France's Valentin Teillet was an impressive ninth overall with 8-10 moto scores at the 2018 Ironman National, which was a mudder. Great Britain's Jake Nichols raced the 2018 RedBud National where he finished 10th overall with 9-13 scores.

So who did we miss? Please let us know in the comments below….